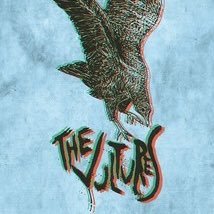 With their second album due for release on 17 April 2017 The Vultures give LTW an exclusive playlist of influences and current favourites.

We are huge Gainsbourg fans in the band and we are influenced by a lot of his work, sampled from all of his many phases. Melody Nelson however is a special one and I mean both the song “Ballade de Melody Nelson” and the 1971 concept album “Histoire de Melody Nelson” it’s from. It features Gainsbourg then wife Jane Birkin. The contrast between Serge’s deep jaded vocals and Jane’s breathy and oh-so-french vocals is something we often wink at with me and Ben’s vocals in The Vultures.

It’s hard to choose just one track from this french band, especially from their 2000 album  “Comme on a Dit” which is an absolute masterpiece. The kind of album you play again and again and never gets out of style. I’m hoping more non-French music lovers will discover this great band.

Again, it was hard to choose from the many, many classics written and performed by the great Jacques Brel. Amsterdam seems to be the most known of his work among non-French speakers, I’m guessing it is in no little part due to David Bowie’s cover of it (which was wonderful). As a native French speaker I was surprised/delighted to see that the song seems to reach people who can’t understand the lyrics as much as those who can. It can only be proof of M. Brel’s mastery of evocative songwriting. In French music (or “chanson” to be accurate/annoying) the lyrics are in the driver seat and the music is often the actual seat it rests upon. Brel however conveys emotions just as well through music alone. Although I do wish his English speaking fans could understand his remarkable poetry.

We might not have AF’s post rock quaver pounding (popularised by Interpol) but I always thought we swam in the same waters or at least neighboring water (no pun intended). It could also be because they’re from my hometown of Montreal that I was reminded of them when we started The Vultures but if I attempt to rationalise it I would say it’s rather their use of non-rock instruments in a rock band which they revived at the time that made the connection for me.

We listened to Ween in the van on our way to playing an out of town festival last year and they kind of became the Vultures’ official on-the-road-soundtrack. Whenever this particular track comes on we all fall silent and listen. The whole kettle quietly listening for 7 intense minutes (a kettle is the collective term for vultures when in flight).

This is a Brazilian cover of the wonderful country classic “16 Tons” by Tennessee Ernie Ford which itself would have made the list if the cover hasn’t surpassed it, which in itself is a rare thing. Translated covers are even harder to get right but without speaking a word of Portuguese I would guess from listening to the differences between both versions that Vilela has adjusted the melody to accommodate his mother tongue’s natural inflections, which people often fail to do when translating songs and is often what makes them feel kind of off. The changes suit the songs incredibly well and Vilela’s voice is like thick honey, especially when he hits that low note at the end of each section. On top it all, as Nouvelle Vague has previously demonstrated, pretty much any song can benefit from being played as a Bossa Nova (a style of music actually created by another of our french musical heroes: Henri Salvador).

Like most people we discovered this track when it was featured on the movie Ghost World in 2001. 16 years later and it still never fails to get us up and dancing. In other words; a timeless classic and instant party saver. It turns frowns upside down and gets booties shaking.

Our singer Ben (the mastermind behind The Vultures) first played this song to me and I think we have been putting it on every time we’ve been in the same room ever since. Even though it’s pretty much just the same riff for nearly 8 minutes we just can’t get enough of it and sometimes play it again from the start when it ends. Most addictive song ever.

Girl Band – Why They Hide Their Bodies Under My Garage?

Originally by Blawan, this Girl Band cover is probably the most recent track on this playlist. In fact it’s personally the most recent track to get my attention. While the original track was pretty good this cover is a monster of a track. The kind of song that makes you turn the volume up several time during its play time (over 6 minutes) as it never seems loud enough. You want to hear that track in a club. Or better yet see the band live which is no small feat. I haven’t managed to score tickets yet and their “secret” shows have thousands of fans queuing up. I think it’s clear that I’m not the only one who loves them. Yet I still find myself telling some people that no, Girl Band is not an actual girl band.

It was a tough choice between this original track and the skillful cover by Grace Jones. I would recommend anyone to listen to both but I went with this one for its “Talking Head” feel and for the fact that it is hardly known at all, being one of only tracks Daniel Miller recorded as The Normal, as far as I know. We always said we would never do covers but if we ever did it would probably be this track. I guess if enough people pestered us to do it (hint hint)…

The Vultures release Three Mothers Part 2 via Ciao Ketchup Recordings on 17 April and is available to pre-order here.