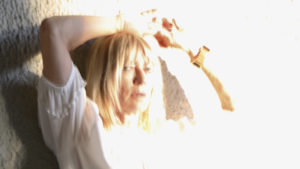 Former Sonic Youth mainstay, Kim Gordon has released her first-ever solo track under her own name. The song, Murdered Out, that lopes along on a heavy groove and bass line and is released by Matador.

It may have a pop producer – Justin Raisen (Charli XCX, Sky Ferreira) but has enough noise and distortion to keep everyone happy and is a great and thrilling song.