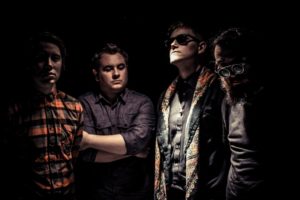 Geordie psych rockers Bernaccia have streamed a brand new track ahead of the release of their forthcoming debut album.

Louder Than War, whilst not one of the first, have been big fans of the quartet for a while now and we feel that Power To The Hills is their best offering yet providing a tantalizing preview of what lies in store on their first long player (tentatively called Growl Peace Belief).

The huge sound of the track lends itself to a festival atmosphere and one which the band describe of ‘tribal desert blues and the powerful Burundi beat throughout lends a whole new dimension to the bands incredible sound. Slowly building from the beginning the track skillfully introduces each instrument before the deep, swaggering vocals of frontman Johnny Noble enter the fray.

Noble’s deep vocals and screamed title blend perfectly and the band are now showing why so many people are starting to sit up and take notice. With a single launch at Newcastle’s Mining Institute on 10 October, the future is looking deservedly rosy for Bernaccia.