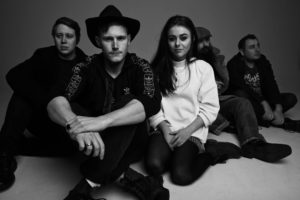 Newcastle based alternative five piece Bernaccia mix choral and tribal rhythms together with sweeping soundscapes and neo-psychedelic guitars and take influence from bands such as Arcade Fire, GOAT, and Warpaint.

September 2016 sees the release of their next single Angel along with the release of their first full length album Growl Peace Belief. Recorded at Blank Studios with Chris McManus The band have received constant backing from Nick Roberts at BBC Introducing including two live sessions and are big favourites of us at Louder Than War. They have opened shows for YAK, The Fall, Hidden Charms, Lola Colt and Alabama 3 last year also playing Evolution Emerging, Tramlines and Northbound Festival.