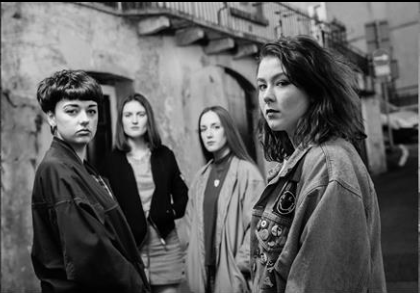 Pwysau is the debut single from post-folk four piece outfit Adwaith and is released today on the fledgling Decidedly Records label based in Carmarthen.

Pwysau is described as a “hymn and a call to arms to those of us who have felt that things are getting too much. In the modern hiss and hum world where even within the confines of your own bedroom you can get bullied and pressurised it can feel like there is no escape. With Pwysau, Adwaith offer their hand and let the listener know that are people who care and who can support you in your time of need.”

On the surface, Pwysau can be heard as a folk song but there is certainly something otherworldly and odd in the mix making it stand out from the norm.

Adwaith recently worked with Patricia Morgan from the acclaimed band Datblygu and cite the duo of Pat and David as influences so you know that they were never going to make a straight-forward sounding single.

Pwysau is available as a free download via Decidedly Records Soundcloud page (See above).