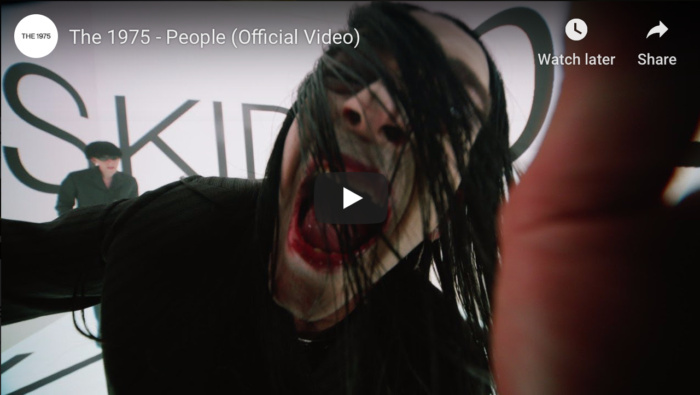 The 1975 have become the biggest band in the UK – the closest we have at the moment to the mythical generational band that sneaks across all genres and is just bloody big.

Now they have the ears of the millenials they have given them a dose of thrilling nose in the shape of their new single ‘People’.

“People like people,” Healy sings on the chorus, then turns to what feels like a send-up of inaction both personal and systemic: “Stop f****** with the kids.”

It harks back to Matt Healy’s youthful love of Fugazi and Converge and other hardcore bands (detailed here in his top 10 favourite albums he did in one of his first ever interviews which was for Louder Than War back in 2012 here)  when he was the only young punk in Wilmslow.

People is a claustrophobic angry song that taps into the toxic modern world and is delivered with a gut-churning urgency. The band are very much on the moment with the second of the two tracks released from their upcoming new album Notes On A Conditional Form – the first track they released from the album, The 1975, featured the voice of climate activist Greta Thunberg and was a plea for serious action in the face of global catastrophe.

It’s time to take this band seriously. They are writing songs that comment on these times, whether it’s their last album A Brief Enquiry Into Online Relationships – which focused on the Internet’s benign influence on relationships or the new album,  a desperate plea for the climate and couching it in very modern pop palette music that can go from ambient to R’n’B to this current hardcore thrash.