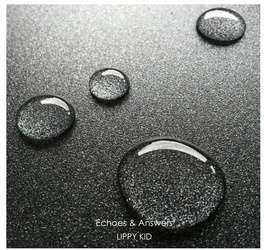 They say that the devil is in the detail. This is very true when it comes to great art. Art should be created by someone who is using their surroundings and pouring it into their work whether that be from an internal or global source. This is especially important when it comes to contextualizing Lippy Kid’s latest long player; Echoes and Answers.

You see, Lippy Kid (or Paul Scott to give him his birth name) has poured every bit of his influences and upbringing into this release. From the press release we are informed of his childhood helping his father (a cinema projectionist), of his guitar-playing days on the fringes of Madchester, through his undisclosed personal issues in which he took a hiatus from creating music, you get a full sense of where this project’s heart lies. Add into that the fact that for inspiration he reached out on social media and simply asked people to finish the sentence “we search the world to find…” and we are made fully aware of the personal/universal themes that are contained within.

Echoes and Answers is a joyous album that harks back to the traditional whilst gazing into the future. Tracks like the submerged house of My Restricted Movement or the twilight-tinged electronica of 24 Hour Reboot (the highlight of the album) we as listeners are given enough moments that seem familiar whilst also being constantly inspired by its creators new furrows.

This is a classic album in style and substance. It reminds of the glory days of Hacienda hedonism (Glistening Beauty), of Underworld at their peak (opening track Sideways In Time is a masterclass in restrained introduction)   and even of ‘I’m Afraid Of Americans’-era Bowie (Form Or Dot).

Lippy Kid also displays a great confidence on this album as each track is allowed to go at its own pace, never forced, never compromised with not one track running less that 6 minutes, highlighting the club nature of the release even more as each one is perfect for using as a single track when you’re in the mix whilst also maintaining a level of cohesiveness that allows you to enjoy as a whole.

Echoes and Answers is a standout album that walks the fine line between inner and outer space. A wonderful and life-affirming listen.

Echoes and Answers can be downloaded here.