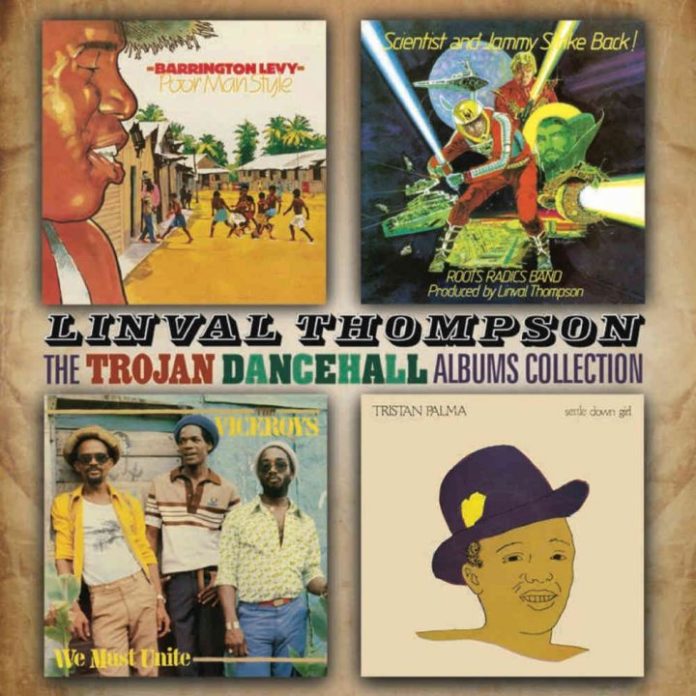 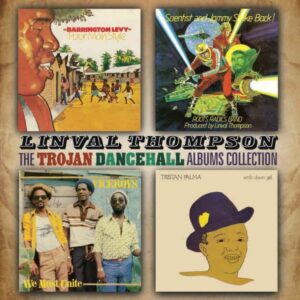 2CD set consisting of four Linval Thompson produced Trojan Records LPs from the early 80s, featuring such dancehall luminaries as Barrington Levy, Tristan Palma and the Viceroys. Also included is a dub album by Scientist and Prince Jammy and a couple of bonus tracks by the Majesterians. LTW’s Ian Canty sees what happen when the dance took over again on Kingston’s music scene…

Linval Thompson had made his name as a singer and producer in the early 70s, navigating the fads of the Kingston music scene with apparent ease. First coming into his own during the dub and roots eras (see here and here), in the 80s when things began to change Linval was as ready as anyone. Dancehall was an evolution into something different and new by using what was already there and Thompson had the musicians and players primed to succeed as the beat changed.

Dub effects were still employed, but more as part of the backing music. There were similar strident messages and rhythms to roots and even reggae and rocksteady before that, but the love song would come to be prominent. The singers were firmly placed in the spotlight though and their way with a tune would be absolutely essential for success. Also a tight dance groove was a necessity, with just hints of melody among the bass and percussion providing the instrumental drive. This offered yet another chance to re-use rhythms, something that the digital revolution, which was also on the way, would only accelerate.

Barrington Levy is a singer whose star was very much in the ascendancy during those early dancehall days. He was already a big star in Jamaica by the time of Poor Man Style (his ninth album since his debut in 1979!) and he was beginning to make an impact in Europe too. Poor Man Style is the work of a man supremely relaxed in the recording studio. The dub crossover is in full effect I Can’t Wait Too Long, a real languid banger and the effortlessly cool title track harks back lyrically to the social consciousness reggae of the 70s.

This Little Boy is excellent, very soulful and again using drop out and other dub signatures allied to a steady rhythm. The jangling percussion and soaring vocal line of Rob & Gone makes for a pleasing conclusion to the record. This album shows the inventiveness of Thompson and also that when Levy got his groove he didn’t let up. Overall Poor Man Style is an excellent example of early dancehall, with subject matter running the gamut from straight up love songs to serious and heartfelt sufferers’ paeans and it is all eminently danceable too.

Scientist and Prince Jammy’s Scientist And Jammy Strike Back isn’t really a dancehall album at all. It’s more a nice set of dub cuts with a Star Wars/Sci Fi theme in the song titles and artwork, something that apparently got them into a spot of trouble with one George Lucas. It seems that these problems resulted in the album’s release being limited, which is a shame as it’s pretty good stuff, with the Roots Radics band in full effect throughout. Recorded at King Tubby’s, Strike Back see the dub masters working separately rather than as a duo, with Scientist’s mixes more prevalent on side one and Jammy having the upper hand on the reverse.

Mission Impossible’s title didn’t really fit the Sci-Fi theme, but the bendy bassline on it is a delight and The Alien Aborts has percussion thudding right up front of a roots style skank. The bass leads us through the suitably dramatic The Death Of Mr Spock, percussive smashes come in and out and the piece almost grinds to a halt before the rhythm picks up again. The album ends well with a sharp three-pronged finish. Flash Gordon Meets Luke Skywalker is echo-drenched sortie into hyperspace and The Son Of Darth Vader manages to throw a little funk in, taking it away from the usual dub offerings. Last track C-3PO + R2DR = The Force clanks with robotic style, with little tingles of cymbals and organ sounds wafting in, providing fitting end to a crazed dub excursion to the future.

Over on disc two we get probably the pick of the albums presented here, the Viceroys’ We Must Unite. With a history that reached right back into the rocksteady of 1967, by the time of this album Viceroys’ founder member Wesley Tinglin (who wrote the entire LP) was joined by Neville Ingram and Norris Reid and their ultra-cool harmony vocal talents are excellent deployed throughout. There is an argument that this is actually more a late-period roots LP that a genuine dancehall album, but with the kind of quality on show it ultimately doesn’t really matter.

There’s any number of treats on We Must Unite, not least the militant title track, with the lead and backing vocals gelling marvellously. Love Is A Key is a more spartan dancehall groove, but the Viceroys’ warm voices easily make up for the sparse instrumental palette. They put those flawless harmonies to good use on Rasta anthem Rising The Strength Of Jah and the soul of Time Is Important To Me. If we remember that dancehall was largely built on rocksteady rhythms the Viceroys were perfectly placed to bring that vocal group sound into the 1980s. We Must Unite admirably captures that stage of dancehall’s development when roots, dub and even doo wop soul came together and it was fabulous.

The final long player featured here is Tristan Palma’s Settle Down Girl (there are also a couple of single versions of the title track which conclude disc one of this set), which hasn’t been released on CD before. In comparison to the above three, Tristram is a lesser-known name, but his voice was well suited to the dancehall style. He first recorded with Bunny Lee in the early 70s, but it wasn’t until the end of the decade that he built a proper career in music, scoring a number of hits in Jamaica.

Settle Down Girl itself was a fine single, very cool and catchy, with a smart dub section tacked onto the end of the 12 inch version. His Rosie Bell is classic lovers’ dancehall and he applies his full-bodied voice well on Run Around Woman. The pop reggae of Give My Love A Try had real hit potential and You’re Too Young has a great guitar sound in amongst a prime “dread love” song. Though not quite the equal of the Viceroys or Barrington Levy for me, Settle Down Girl is a very listenable reggae record.

The set is rounded off by two efforts by the Majesterians, well If I Didn’t Want Your Loving 12 Inch mix and Loving Version, which was rendered by the Roots Radics Band. The former is a very deep roots number with a nice vocal group arrangement carried out expertly, with the latter its smooth dub equivalent. The group itself seem to have recorded a few records with Sly and Robbie’s Taxi Gang, but apart from that are a bit of a mystery. Nevertheless, their tracks bring this set to a nice finale.

The Trojan Dancehall Albums Collection ably demonstrates the ease with which Linval Thompson passed from the roots and dub into dancehall. The Viceroys’ album is one that should be in the collections of everyone that loves catchy, exquisitely crafted reggae music with a message and makes the set worth it on its own. Barrington Levy shines on Poor Man Style, showing the style which would set him up for a long career that continues today and Tristan Palma’s Settle Down Girl isn’t that far behind. Added to this the dub set by Scientist and Prince Jammy is inventive and a lot of fun too. The bonus tracks round things off nicely for a release that starts Doctor Bird’s year with a real bang. It works both as a time capsule and a rattling good collection even in 2020 – if you’ve a liking for reggae in any of its forms, you would do well to give this one a listen.