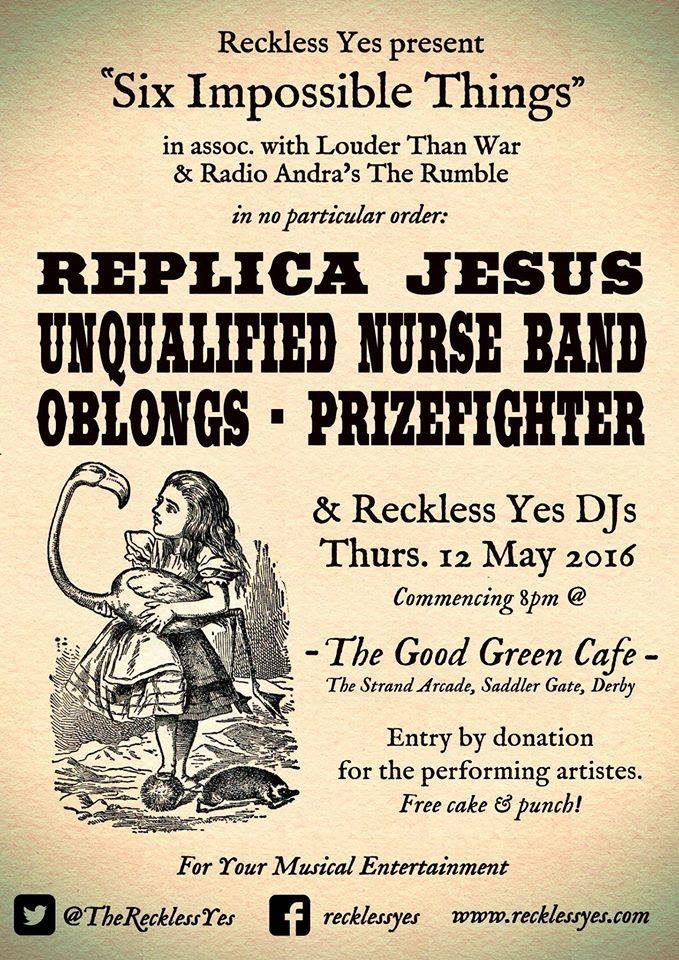 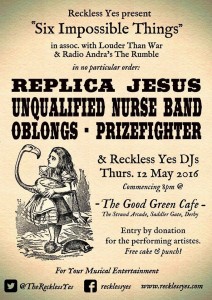 Louder Than War are pleased to be supporting Six Impossible Things – a new not-for-profit night being curated by our editor Sarah Lay and Radio Andra’s Pete Darrington.

All too often are the cries heard of nobody comes here in a variety of towns and cities across the land, and whilst there may be some truth in such a statement there is one underlying problem; a lack of willingness to do something about it. It only takes one person (in this case two people) to stand up and be counted.

With a refreshing statement of intent and a willingness to go against the status quo, Reckless Yes are set to put on their first gig on the 12 May at the Good Green Café in Derby.

Formed by our own Sarah Lay and Radio Andra’s Peter Darrington, Reckless Yes’ aim is simple, provide a platform in Derby for bands to be heard. With Peter stating that:  “Every week on my radio show I play around 30 records by bands you probably don’t know who are doing this. Most of them don’t have record deals of any kind. But through listening to the programme, bands are finding labels to put their records out, other bands to play with up and down the country and journalists are writing about it. But there’s no secret formula that makes it work other than getting off your arse and getting involved.”

The night, called Six Impossible Things features four bands that all play for an equal amount of time, Reckless Yes DJs, choose your price entry (with money divided between the bands at the end of the night), free cake and punch. What more could you ask for!

Sarah said: “Louder Than War is founded on this same DIY spirit, the idea that something can be made from nothing if the will is there. We’re applying that same approach to getting something going in Derby, building a supportive community as much as bringing some of the great bands we support on the website and the radio show together for what we think will be an amazing show.”

Those four bands are as follows:

The May date will be the first of bi-monthly shows in the town alongside other events from Reckless Yes.

For more information on Reckless Yes you can find them online here. They’re also on Facebook, and tweet as @TheRecklessYes.

Tune in to Radio Andra each Tuesday night from 8pm to hear the best of the underground on Pete’s show, The Rumble, where Sarah provides a recommended track on behalf of Louder Than War each week too.