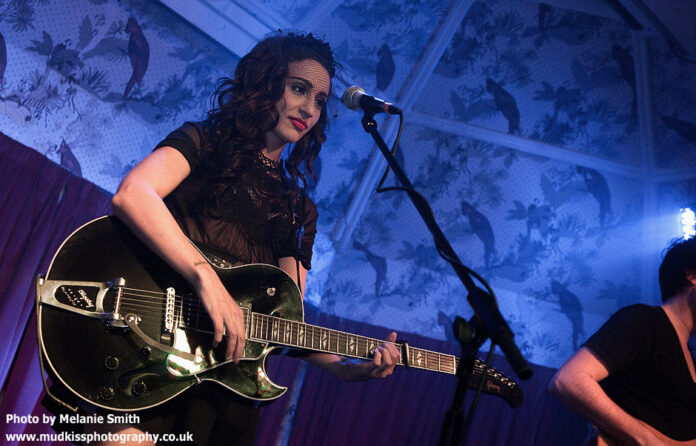 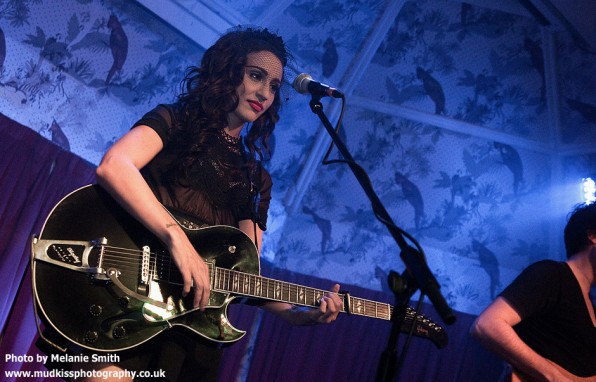 Louder Than War fave Lindi Ortega, queen of alt. country, is now on tour and in scintillating form says Joe Whyte. Photos by Melanie Smith (taken on the same tour but a different date – Deaf Institute, Manchester on 24th Jan 2014.)

Just a mere stones throw from the tourist traps and tartan tat of Edinburgh’s Princes Street, The Voodoo Rooms is a little hidden gem in the capital. Upstairs from a proper traditional pub, its gilt ceilings and Victorian decor are somewhat apt for an artist who seems so timeless, out of time and at the same time very much of the now. 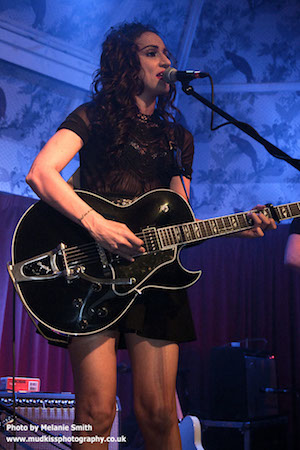 It must be the best time for any band or artist; that moment when the career is propelled skywards, people are taking notice and it’s all just so there. Lindi Ortega and her band are at that stage. Sold-out tours in venues that are above the intimate and below the cavernous. She’s still in touch with the crowd, they’re hanging on her every word and gesture. This isn’t how it’s going to be for long. This gal is going to be huge and this is a moment to be savoured for all of us lucky souls packed in beneath the golden copula and ornate plasterwork of the ballroom.

Ortega hasn’t just appeared out of some A&R teams imagination. Three albums in and the “school geek” from Canada has relocated to Nashville and current album Tin Star was a triumphant end to 2013 and a late album of the year contender for this writer.

It doesn’t hurt of course that Ortega is, well, rather photogenic. She’s one part country starlet, one part bar-room queen; red lipstick and crimson cowboy boots are her trademark look and the porcelain skin and tousled midnight black hair are pretty unforgettable. She’s been described as a country Amy Winehouse, and sure, there are songs about misery, pain, regret and bad decisions, but when Lindi sings of shitty dates and wanting whiskey and weed it’s with a glint in the eye that tells you this is no victim-in-waiting.

It’s not all about the look of course. Ortega has more than enough ammunition in her material to shoot down the naysayers. Touring with Social Distortion and covering The Ramones I Wanna be Sedated are just part of the story. This is country music played with fire, soul and not a little verve. Guitarist James Robertson nearly steals the show with some swerving note bending and down-tuned death rattle. The capital crowd quickly warm to him and the chants of “Robbo, Robbo” are received with a blush and a grin. Ortega is touring with just a backing group of R0bertson and drummer “Coxo” (didn’t catch his first name, sorry!) and it’s striking how powerful the material is this stripped back. Much of tonight’s set features just Ortega and Robertson and given the space to breathe and stretch out, the songs take on new dimensions. It’s country music, sure, but filtered through the blues, New Orleans jazz and rockabilly and one gets the impression that Ortega could sing the phone book and make it sound alive and important.

Ortega’s voice is a  truly remarkable weapon.  Tin Star itself, which she dedicates to all of the creative people who don’t get to be famous is a more hushed and reverential thing than on record with Ortega’s soaring voice a ghostly shiver.

Hard As This sees Ortega’s black Gibson semi acoustic set to vibrato overload and she’s no slouch herself although her hands look tiny against the fretboard. She’s utterly charismatic and interacts easily with the crowd who are in rapt attention. The acerbic wit of Voodoo Mama and the tongue-firmly-in-cheek of High are at odds with the trad country lyrics of Waiting On My Luck To Change. It all works, however, and there’s little of the set that’s not hugely endearing.

She jokes about her “happy little songs” before introducing The Day You Die and serious though the songs are, she’s able to chuckle a little and her self-effacing humour is engaging.

After a too-brief encore it’s over. She’s out front signing albums and posing for photos for what seems an age. She spends time with literally everyone in the audience before donning her coat against the Scottish chill and starts hauling drums and equipment down the stairs of the venue.

Lindi Ortega. You’ll be hearing more about this lass.

Tin Star is out now on Last Gang and is currently touring the UK and Europe.

All words by Joe Whyte whose Louder Than War author’s archive is here and both pics by Melanie Smith. Mel’s pics can also mudkissphotography.co.uk.