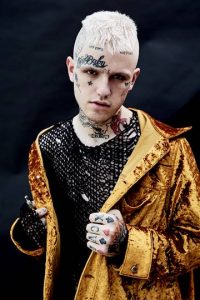 American singer and rapper Gustav Åhr, better known by his stage name Lil Peep, released his debut album Come Over When You’re Sober (Part One) last month and is stopping off in Manchester and London this September with live dates supporting the release.

Lil Peep recently released a new video for Awful Things, promoting the latest track off of the album,Come Over When You’re Sober (Part One). The video was directed by Sus Boy (Lil Peep’s creative director) and Nick Koenig (aka American record producer Hot Sugar) and features Smokeasac along with GothBoiClique members Fish Narc and Lil Tracy. Inspiration for the video has came from an array of anime inspired themes from shows like Shiki and classics horror films. “It’s a glimpse at the unhinged fantasies of a love-struck teenager,” Koenig said of the video, Sus Boy adding “High school is hell, but that feels like heaven to Peep.”

Come Over When You’re Sober (Part One) is available for purchase on iTunes and stream on Spotify. Lil Peep’s debut is awash with emo aesthetics; a somewhat tortured and pessimistic prose smooched up against amp-ed up rap drums and samples. The traditional rock n roll petulant angst perfectly working alongside the provocative melding of genres on a gratifying album.

This autumn Lil Peep is taking his Come Over When You’re Sober Tour around the US and Europe; playing two dates the UK at Manchester’s Gorilla on 25 September 2017 and at London’s O2 Islington on 26 September 2017. Tickets are available from many of the usual ticket retailers including See Tickets and Lil Peeps official website.