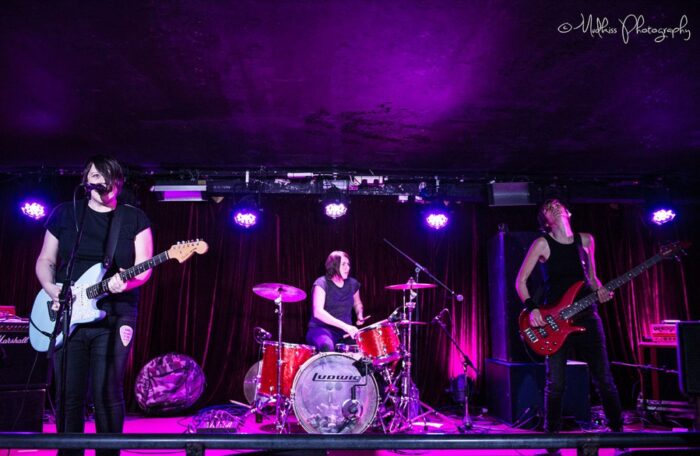 Sometimes you catch a band that gives you a thrill about watching live music again, a band so vibrant, so full of life that they hit you within seconds and leave you reeling for the rest of their set and keep you coming back for more.

LIINES did that us on a wet December day last year opening up a feminist zine launch party in Gullivers early one Sunday evening. Within thirty seconds of them starting up, we knew this was a band that had something magical – a trio of vocals/guitar, bass and drums that manage to make both an almighty racket but from that create these wondrous shards of melody and rhythm that would cut through you, change the direction of a song without you even noticing and, unusually for a rock band, make you want to dance.

Fast forward eleven months and they’ve been burrowed away on the Continent where they’re huge in the clubs of Germany and Austria whilst still unknown in their hometown as well as in the studio recording tracks for release next year as well as their forthcoming debut single Never There, which Louder Than War featured recently, but they couldn’t resist the lure of supporting Ex Hex, fronted by Mary Timony, one of singer Zoe’s all-time heroes.

They start as they mean to progress with the sucker punch of Yes, Again and you watch those that have braved the monsoon outside to get here earlier visibly taken aback by the onslaught coming from the stage. It’s raw and fierce, provocative, in your face, just how the best rock music should be and so often isn’t. They don’t take any prisoners, Zoe and drummer Leila look like they’re about to expire at the end of each of the the short sharp two or three minute adrenalin blasts whilst bassist Steph, oozing effortless cool, is almost oblivious to the sonic wreckage that they’re creating around them. The crowd get it though, the response is phenomenal from the gathered few for a band that was as new to them as they were to us on the fateful Sunday night.

There’s no let up in the course of their half-hour set in which they deliver ten songs. Liar and Cold, which form part of a demo EP they’ve showcased on line, tear your head off if you stand too close, a mix of pent-up fury and passion set to a beat that veers from sparse and spindly to a full on tsunami. There isn’t a weak song in the set and they’re adding more new material all the time as they prepare for their debut album. There’s no point where they take their foot off the gas and relax, there’s no compromise to LIINES’ sound, no half measures, it’s all or nothing, do or die and by the time they finish with their single Never There the growing audience are completely won over and excitedly trying to find out more about them.

LIINES are the hardest band in town. Armed with just three instruments and a voice they’re waging war with music as their weapon. Resistance is futile.

LIINES headline the Night And Day Cafe in Manchester on Saturday November 21st and release Never There on Monday November 23rd.

Read an interview with Mary Timony of Ex Hex here.