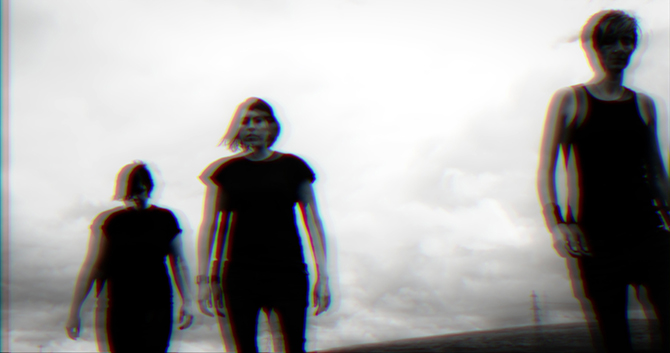 LIINES are your new favourite post-punk trio from Manchester. We first tipped them back at the end of 2015 and with three storming singles released so far on Reckless Yes, plus a debut album on the stove, all eyes are on this sharply-focussed band to see what’s next.

Louder Than War’s Cassie Fox caught up with Zoe McVeigh (Vocals/Guitar) and Leila O’Sullivan (Drums) ahead of their main stage slot at LOUD WOMEN Fest on 2 Sept.

Louder Than War: I love finding out how bands get things done off-stage. How does LIINES work?

Zoe: I write the songs, or at least the shell of the songs. Come up with hooks and melodies, and take them to rehearsal, with a structure – or that’s something we work on together. I love watching new songs unfold. It’s so exciting when you feel you’re onto something special and you can’t wait to play it live! I write all the lyrics too. There’s no way I could put so much into someone else’s words.

Leila: It’s an exciting day when Zoe comes to rehearsal with something new to try out, especially as I know she’s strict with what she brings to us, so whatever she does bring is always going to have something worth trying out. I’m really excited by some of the later tracks we recorded for the album. It’s taken us in a slightly newer direction and so I can’t wait to start working on some new tracks for playing live later in the year.

And aside from being the one who has to lug the most gear around… I take on a lot of the admin-y stuff – gigs, travel arrangements as well as our website and social media stuff. Maybe the less glamorous side of being in a band, but there’s definitely a lot to do and it keeps me busy!

LTW: Who were your musical inspirations growing up? And what current artists are inspiring you right now?

Zoe: I was very much into stuff my dad played me. I grew up listening to really exciting music such as Siouxsie, Bowie, Iggy, Lou Reed, Alien Sex Fiend, Bauhaus. Lots of men in make up, lots of expression, lots of rule breaking and history making. I absolutely loved it. Some of the artists I’m loving at the moment are Bully, Daughter and Nelson Can. Also, earlier this year, we got a bit sick of turning up to ‘alternative’ bars and clubs and only hearing male artists – sometimes there was the odd female/band played, but rarely anything current or daring. So we started a Spotify playlist of music written and performed by female artists we love. It’s not that we don’t like, or aren’t influenced by male artists. It was just in response to these experiences, and we’re quite pleased with how it’s taken shape. We’ll be definitely adding some of the LOUD WOMEN Fest artists in the coming weeks!

Leila: I was into grunge/rock and britpop when I was younger, the likes of Nirvana, Hole, (early) Foo Fighters, Elastica, Pixies etc, and was going to gigs and festivals as soon as I could. I still love seeing bands live – though don’t get to as many gigs as I’d like – but we’ve been lucky to play with some ace bands recently including Pet Crow, Heavy Heart and Cherry Hex and the Dream Church. All three are very different but we really loved their sets and what they’ve released so far, so encourage people to check them out! More established artists that I’ve loved seeing live in the last six months that have been really exciting shows include Peaches, The xx and even Arcade Fire last month in Manchester. These are artists and bands who have been around a long time and come back to do live shows that have blown me way, many albums in – what an amazing place to be!

LTW: What are your goals as a band?

Leila: Our main goal over the last few years has been to get our album finished and OUT – and after a REALLY long time we’re very nearly ready! We’ve kind of been holding back a bit this year until the album was done, so we’ll be wanting to get out and about as much as well can off the back of the album release later this year and beyond. We’ve had some incredible experiences playing gigs and festivals across the UK. So I think a big goal for us is to open up new opportunities off the back of our album release, and see where it takes us!

One goal we’d had for a while was to get some support or mentoring in some way as it sometimes can feel quite difficult to know the right things to do (or not do) as a band. We were really fortunate that Reckless Yes (in the form of Sarah Lay and Pete Darrington) approached us early last year. They’ve been a really important part of our development over the last 12-18 months, two really experienced, passionate people who have our backs, and who we’re lucky enough have been willing to put our first 7” – and soon our debut album! We love the other bands they’ve been working with through Reckless Yes too, so we knew we were onto a good thing!

Zoe: We’re really lucky to have experienced travelling around and playing in Europe quite a bit, which have been some of our best times (in life!) ever, so we’d love to get back there to tour our new album!

LTW: We’re excited to hear that your debut album is coming soon – tell us more!

Leila: As I said, our album has been a LONG time coming but we’re really glad we’ve taken the time to do it right – we’re so proud of where we’ve ended up with it. Like most bands, we’ve had to self-fund recording the album. This has taken a few years to be in the right place money-wise, as well as song-wise. Then getting everything in place to work on the tracks and record them has taken time around work and other commitments. So it’s been a slow process, but we finally got there.

Zoe: When we signed to Reckless Yes one of the first things they recommended was to work with producer Paul Tipler. He’s got such a big track record of working with bands we love – and love the sounds of – so we were bought in immediately. It’s been a completely new process working with Paul. Whilst some of the songs have been more straightforward recording-wise, we’ve loved the development of recording others, trying some new techniques or making the tracks a bit different to how we’d play them live. I think we, and Paul, are really pleased with how it’s turned out, so we’re really excited for people to hear it.

LTW: You’ve had a brilliant run so far I’d say! What advice would you offer bands starting out?

Zoe: We’ve done ok! Obviously it’s always nerve-wracking when you’re releasing new music but we’ve been really pleased with the response so far… and now we’re nervous to see what people think about the album! In terms of advice, I would say go out any play as many gigs as you can. It’s the best way to really develop your songs and own style, as well as making friends and contacts along the way. Another thing is it’s important to be true to yourself. Write for yourself. I think it’s much better to watch an honest performance than watch someone acting on stage. I get so much more out of real emotions, when a performer has conviction.

Leila: Releasing music is obviously a big part of getting your music out there. LIINES had been around a while before we released anything – until then we only had an EP we were selling at gigs. We had a band meeting in a pub (the best meetings!) and it was one of the first times we’d taken a step back and made a plan – to release our first single, Never There. We set a release date, worked backwards to mark a few key dates and got going. We googled everything – from how to write a press release to what should be in a press kit, and trawled Facebook/Twitter and everywhere for good press contacts. And we contacted a lot of people who we knew or who had said nice things about us in the past. It was very hit and miss, but we also were really lucky with some of the support we got, and it worked better than we could have imagined – getting coverage on some big websites, like Louder Than War, and even national airplay on Radio X. It really put us in a strong place going forwards to build on for future releases and opening up other opportunities. So sometimes it’s good to take a step back and make a plan! Might not be the most inspiring advice, but we’ve found it a really important step.

LTW: I’m delighted that you’ll be joining us this year at LOUD WOMEN Fest! Do you often play with other female musicians? What are you expecting/looking forward to at the Fest?

Leila: To be honest it varies a lot bill to bill whether we play with other female musicians. I don’t like to say it’s a pleasant surprise when we do, but often it is. We’ve played a few festivals that are focused around female artists – Ladyfests in Manchester and elsewhere, and now LOUD WOMEN Fest, and although they shouldn’t still be necessary, they clearly still are and they have been some of the most amazing atmospheres we’ve played in.

Zoe: The line-up looks so strong. I’m expecting to be completely blown way, to be honest. By the quality and energy of the music in the room, and by the people coming down to watch and dance. It sounds like LOUD WOMEN has got something really special going on, so we can’t wait to finally be a part of it. It looks mega!

Leila: We’ve heard amazing things about DIY Space for London too. Spaces like this are so important. We just played the opening of Partisan Collective in Manchester, another co-op space, and it was such a great night – actually one of our favourite gigs in a while. So we’re expecting a similar, electric atmosphere! It’s exciting to be playing so close to home for me – randomly doors down from where LIINES recorded our album, but also where I went to primary school and grew up!

We’ve been listening to the LOUD WOMEN playlist, and so far we are loving The Twistettes, Sink Ya Teeth, Dream Nails and GUTTFULL! See you in a few weeks!

Interview by Cassie Fox. More writing by Cassie on Louder Than War can be found at her author’s archive. She tweets as @cassieefox or @loudwomenclub