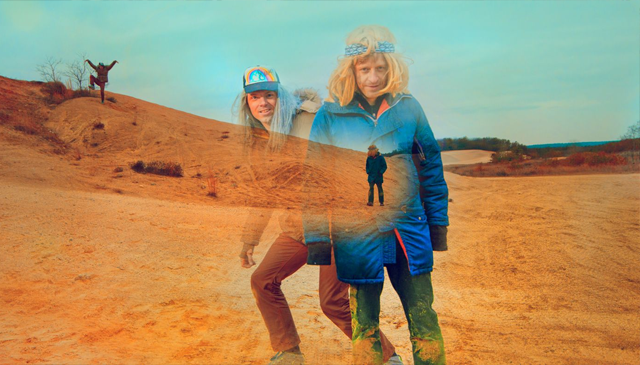 Providence, Rhode Island’s noise rock titans Lightning Bolt make a long-awaited return to the UK, taking in Leeds’ Brudenell Social Club along the way. Louder Than War’s Nick Canessa jammed out with his clam out.

It’s 5:30pm outside the Brudenell Social Club, a whole two hours before the doors are to open. With a cider in hand, I watch in awe at the number of fans turning up already, strolling towards the bar with smiles of anticipation painted across their faces. But when you consider that it’s taken Lightning Bolt six long years to come back to the UK proper (with the exclusion of ATP appearances here and there), suddenly this ecstatic display of fandom seems wholly justified. With the arrival of Fantasy Empire – arguably their best document to date and a perfect introduction to their blisteringly loud, comical sound – comes a welcome return to the famed Leeds’ venue as part of a tour taking in co-headline dates with Om and a slot at Brighton’s Mutations Festival.

Those that did arrive early were in for a real treat courtesy of Dan Friel’s lovably fuzzy noise. In what can only be described as the musical equivalent of consuming a gallon of skittles, the masses politely nod along to distorted anthems and broken beats, tracks off Friel’s new album Life like ‘Rattler’ and ‘Cirrus’ garnering a deservedly warm reception. Visually, his live set-up – a small board crammed with effects pedals, woven together with fairy lights – suitably matches his sound in its raw attractiveness, and despite a somewhat static stage presence (bar some occasional head-banging), watching Friel play these songs out as he tinkers with every pedal in his arsenal is a beautiful thing to behold.

Before he leaves the stage, Friel proclaims “were any of you guys here for Lightning Bolt’s last show here?” as a sea of hands rise to the air. This cult-like adoration shared amongst audience members makes Lightning Bolt’s appearance at the Brudenell tonight not just an exhilarating experience, but a very, very special occasion. Any doubts of a show less extreme than Brian Chippendale and Brian Gibson are capable of – abandoning their infamous guerrilla-style floor set-up to make the most of the Brudenell’s sizeable stage – are swiftly put to rest once the opening, chugging riff of ‘The Metal East’ kicks in. From this point on, it’s take-off.

The inevitable pit that forms serves less as a means of violence and more as a sweaty space for fans to bounce off each other, heavy enough to go mental in while friendly enough to hug someone in without passing off as a freak. Chippendale’s technical, speedy drum patterns collide with Gibson’s cello-tuned bass riffs with gnarly results as the band whiz through a setlist that feels almost like a greatest hits showcase, the prog-metal of ‘Colossus’ and the frenetic, driving ‘Dead Cowboy’ making for the most memorable moments of the evening, displaying Lightning Bolt’s talents with pacing and restraint outside of their more bombastic, avant-garde tendencies. Perhaps the finest example of this is show closer ‘Snow White (& The 7 Dwarves Fans)’, cramming the epic structures and slow/fast approach of both of these tracks into a monolithic adventure of 10 or so minutes length.

An encore of the much-requested ‘Dracula Mountain’ is finally delivered as people carelessly freak out, and rightfully so – tonight is proof (if needed) that Lightning Bolt are a force to be reckoned with and remain to be quite simply one of the loudest, most enjoyable bands on the planet. Thanks to the Brudenell’s quality concert room, an enthused fanbase and a near-perfect setlist, this really couldn’t have been made any clearer.

You can find Lightning Bolt here: laserbeast.com. Brian Chippendale is on Twitter as @CHIRPENDALE.