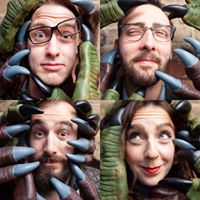 Light Emitting Dinosaurs formed when two previous members of another band called Peter Cat, Archie Wolfman and George Lewkowicz brought in Ethan James, who had a background in musical theatre. They worked as a trio, struggling to find the right vocalist. After a fair bit of trial and error, they persuaded George’s wife Nikki to join them and the band fused into a cohesive whole. With a desire to ‘increase the fun and oddity’ in the current music scene, Light Emitting Dinosaurs say:

‘We want to be on the borderline of epic and silly. Like your gran doing a surprisingly good rap.’

Ambition, which the band have released themselves, has been expertly produced by Nick Howiantz at Brixton Hill Studios. It has a clarity which only emphasises its slight off kilter feel; a surreal, futuristic track.

From the first Persian-influenced bars of Ambition, this new band from Brixton show an ability to mix and match sounds, bringing forth energetic music topped with sweet but strident vocals. An unverified source has likened them to ‘Kate Bush singing over Radiohead.’ Whilst describing themselves as Jazz-Rock, the Rock seems to have pushed to the forefront on Ambition, although the quieter interludes see the Jazz side brought into the picture. Whatever you wish to classify it as, it melds together pleasingly and seamlessly.

The animated video has been produced by George using The Fortnight’s newly added creative mode, something Gamers will probably understand. The protagonist runs through icy, feathery trees, peppered with retro TVs. There is also an unusually placed library, a castle, a little fighting and an interesting use of some pretty advanced graphics. It fits well with the song, enhancing the musical experience.

Light Emitting Dinosaurs certainly aren’t fossilised. They have an individual and musically sophisticated sound well suited to the slightly disjointed feel of modern society. Ambition IS ambitious; an original and pleasing debut.

Photo by Richard A Jephcote. See more of his work here.

Ambition is available on iTunes, Spotify and other good streaming platforms.