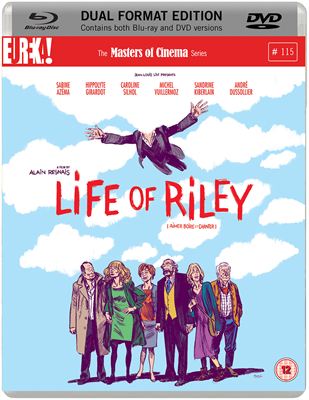 The final film by Alain Resnais is the latest release by Eureka as part of their Masters of Cinema series but does his swansong enhance the legacy of this venerated director? Jamie Havlin gives us his thoughts.

I have Ultravox to thank for bringing the French director Alain Resnais to my attention, or should I say Ultravox! as when they recorded Hiroshima, Mon Amour, named after Resnais’ 1959 film, they were led by John Foxx and were merging punk with glam and Krautrock, the exclamation mark being a nod to Neu!

But enough of Ultravox!

Resnais’ final film, Life of Riley is based on the play by Alan Ayckbourn and in a statement in the booklet that accompanies the release, Ayckbourn mentions that on the surface Resnais and himself make an unlikely pairing but that the Frenchman had explained what he saw as the link between them: ‘You write Movies for the Theatre whereas I make Theatre for the Cinema.’

Sadly, Resnais passed away only three weeks after a glitzy première at the 2014 Berlin Film Festival, where Life of Riley was awarded the Alfred Bauer Prize for a feature film that opens new perspectives. A remarkable achievement as Resnais was in his nineties when he shot it.

The film takes a while to figure out. For starters, although set in rural Yorkshire, the cast consists entirely of French actors who all speak in their native tongue throughout.

Life of Riley appears to open in the backyard of a middle aged couple Colin (Hippolyte Girardot) and Kathryn (Sabine Azéma) as they bicker mildly about the merits of some marmalade Kathryn has bought but it becomes clear, or at least pretty clear, that this is actually a rehearsal for a local am-dram production when Kathryn comes out of character as Colin jumps some lines of dialogue.

This must explain why they’re sitting in a highly stylized stage set with cardboard cut-out shrubbery and curtained backdrops representing the exterior of a house.

Actually no, each shot, whether exterior and interior, follows the same pattern of stage sets, which come to think of it are probably far superior to anything you’d ever expect to see in the world of amateur dramatics.

Additionally close-ups are often filmed against a hand drawn cross-hatched pen and ink backdrop while cuts to new locations are conveyed by shots of a car travelling through country roads and then an illustration of the location by French artist Blutch.

Throughout most of his long and hugely successful career in cinema, Resnais was keen on examining the artificiality of cinema and here he pushes that artificiality to the point where viewers might become alienated by it.

I wasn’t too keen on some of the devices used myself but there is plenty to enjoy about the film generally.

We quickly learn that a man called George Riley has just been diagnosed with terminal cancer and specialists have given him six more months to live.

His impending death has unforeseen consequences for each of the three couples who the film will revolve around; Kathryn and Colin, Tamara (Caroline Sihol), another star of the upcoming play and her love rat husband Jack (Michel Vuillermoz), and Monica (Sandrine Kiberlain), who is still married to George although they’ve separated and her new partner, a white haired farmer, Simeon (Andre Dussollier).

An inconsolable Jack hatches the idea of enlisting George as the leading man in the play and he also attempts to persuade Monica to get back together with his friend.

She is initially reluctant but Kathryn, a former girlfriend of George, and Tamara, who plays his love interest in the play, becomes increasingly attracted to him. Before too long all three women are competing to nurse George and then fly away with him to Tenerife for a two week holiday following the closing night of the play’s run.

Meanwhile their partners look on aghast at the possible disintegration of their own relationships with each of the women.

And here I should mention that another of the quirks of Life of Riley is that most of the real drama takes place off-stage and that, like the Abigail of Abigail’s Party, George is never seen, although at a boisterous party for Jack’s daughter Tilly, he can be viewed by the characters dancing with the birthday girl.

This is entertaining stuff and the performances throughout are worth praising especially that of the naturally comic Sabine Azéma (who was the wife of Resnais for many years). For me, though, the funniest moments in the movie are when a cute animatronic mole appears from the depths of the garden grass for no reason I could readily explain with any degree of certainty.

Why was it so funny? Again I can’t explain. It just is.

Life of Riley is nowhere near as memorable as Hiroshima, Mon Amour and I doubt any band will ever pay homage to it in a song but the film is playful and poignant and fans of Art House cinema in particular should seek out this release.