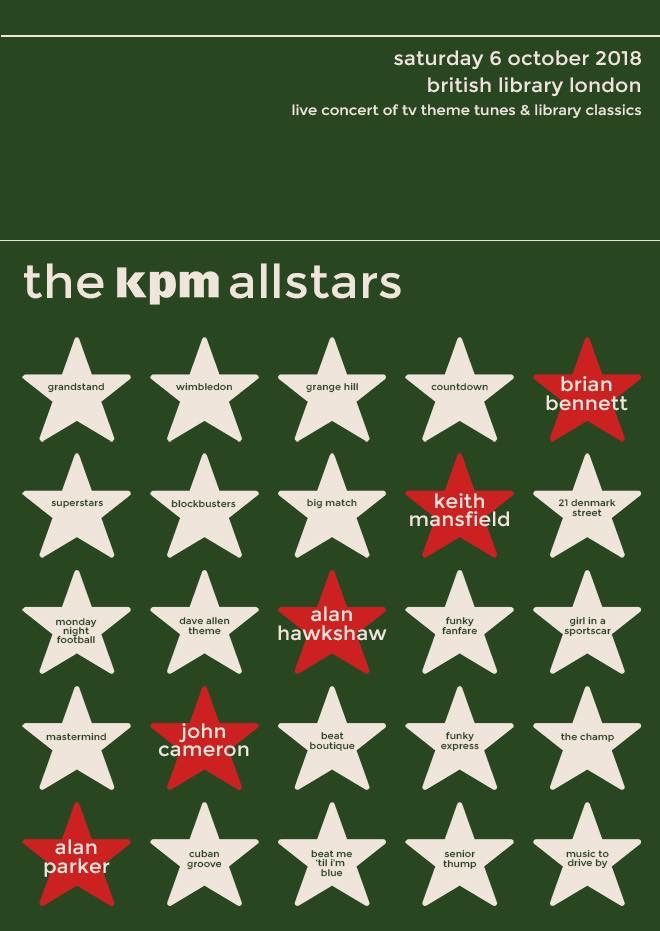 “The unknown, unsung artists who compose, conduct, and perform library music are heroes…Thank you guys, whoever you are!” – George A. Romero. 2018 is seeing an influx of releases regarding Library Music. Some of you might be thinking ‘what is library music?’. What I remember regarding library music is walking through Grandways (now deceased supermarket of the 1970’s/80’s) or listening to the opening sequence of TV sporting programmes and hearing upbeat, funky, soulful and quirky instrumental numbers as I looked around the isles for marshmallows or watching Tony Woodwock scream down the wing past Phil Thompson. If this intrigues the mind then you need to check out the latest releases by David Hollander, Alan Hawkshaw, Brian Bennett, The Library Music Film and the KPM Allstars, all of which are covered here for by Matt Mead for Louder Than War. 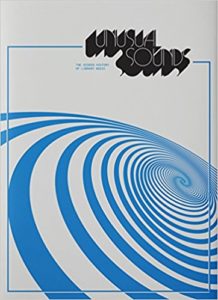 First off we have Unusual Sounds; The Hidden History of Library Music By David Hollander. Anthology Editions have published an extraordinary homage to library music this Spring priced at £65.00, in the form of David Hollander’s Unusual Sounds: The Hidden History of Library Music, a 400-page visual celebration of biblical proportions, that brings to life this genre-bending, ready-made musical form. In the heyday of low-budget television and scrappy genre filmmaking, producers who needed a soundtrack for their commercial entertainments could reach for a selection of library music: albums of stock recordings whose contents fit any mood required. From jingles, fanfares, bridges and extended scores, library music accompanied the action for cinema, TV shows, advertising and more. Though at the time, the use of such records was mostly a cost-cutting manoeuvre for productions that couldn’t afford to hire their own composer, the industry soon took on its own life: library publishers became major financial successes, and much of the work they released was truly extraordinary. In fact, many of these anonymous or pseudonymous scores-on-demand were crafted by some of the greatest musical minds of the late 20th century—expert musicians and innovative composers who revelled in the freedoms offered, paradoxically, by this most corporate of fields.

Unusual Sounds is a deep dive into a musical universe that has, until now, been accessible only to producers and record collectors; a celebration of this strange industry and an examination of its unique place at the nexus of art and commerce. A beautifully designed, full colour document of weird and wonderful audio-visual twists and turns, Unusual Sounds offers up incidental musical accompaniment for every conceivable mood and theme, from ‘soft moods for romantic sequences’ to the sonic accompaniments for ‘a blaze of glory’ or ‘the future’, to nature sounds, ‘intimate disco’, ‘saxophone ballads’ and ‘persuasive jazz’. Amongst an extraordinary showcase of surreal, psychedelic, sexy and experimental graphic design and album cover art, the book uncovers a sumptuous selection of film posters, vintage photography, book covers and related ephemera.

Featuring original art by Robert Beatty, film scores by Italian prog-rockers Goblin and acclaimed composer Ennio Morricone, to an introduction by George A. Romero, whose use of library music in Night of the Living Dead changed film history. Unusual Sounds is mandatory reading for anyone interested in this enigmatic field and its hidden but pervasive cultural influence. 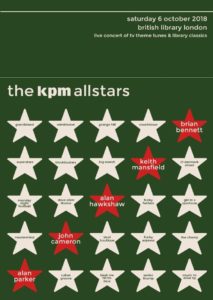 Next up is the KPM All Stars and Alan Hawkshaw/Brian Bennett new album plus The Library Music Film. KPM is the most established name in library music and has been a division of EMI Music Publishing for well over 50 years offering some of the most diverse & original music ever made. Made in locations that would impress even the most die-hard of musical anoraks Abbey Road, Angel Studios and other locations from Ardingly to L.A. – the quest for the perfect musical background is not limited by budget, scale or style.

To celebrate the wonderful and varied catalogue of the KPM Music Library some of the most iconic Library musicians are reuniting to perform their first show in over 6 years on the 6th October. The KPM All Stars are titans in the Library world. Alan Hawkshaw, of The Mohawks fame, Keith Mansfield, another favourite source of samples to hip hop, Brian Bennett, the longest serving stick- man from The Shadows, John Cameron, Award-winning film composer, and Alan Parker, guitarist who taught David Bowie and Jimi Hendrix a few tricks – It’s like a 70’s roll call of fame, the full KPM big band all present and correct.

They’ll be taking the roof off with a selection of classics. Expect to hear the luscious-sticky tones of Dave Allen At Large, Grandstand, Blockbuster, Funky Fanfare, Grange Hill, Half Forgotten Daydreams and even Countdown. Any set list including these little slices ought not just be applauded, it ought to be canonised. It offers a unique piece of British culture that still sounds incredible; with sultry saxes, warm flutes, and a nine-piece brass section! Don’t forget the star of the show- Hawkshaw’s battered Hammond whose sound can still curdle the blood.

As well as the live show there will be a Special Preview Screening of Shawn Lee’s The Library Music Film. The feature length documentary features all the Library music luminaries and defines the story of the hidden music genre.

There will also be a talk prior to the show hosted by Emily Bick (The Wire) where she will be talking to some famous library music fans and the musicians themselves looking into the stories of some of the best known pieces of music on television.

Throughout the weekend, there will be the opportunity to see many rare (and exotic!) Library album covers in the flesh in an exclusive exhibition hosted by the British Library, which will be presented by Anthology Editions and curated by David Hollander, author of Unusual Sounds: The Hidden History of Library. Signed copies of David Hollander’s book will be available to buy.

Outside of the mighty All Stars show music will be provided by a DJ set from two Library music fans in Andy Votel (of Finders Keepers Records) and the excellent Jane Weaver. 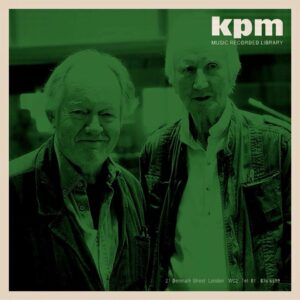 Alan Hawkshaw (piano/Hammond) and Shadow’s drummer Brian Bennett are responsible for some of the slickest, funkiest and most sought-after library records ever made in the UK, particularly ones recorded on the legendary KPM label. They are also two of the most prolific household names that some of you may have never heard of but yet will know their work intrinsically – particularly for their contributions to UK television. The memorable television themes created by Hawkshaw and Bennett are firmly ingrained in the British household and psyche – from Countdown to Grange Hill, Grandstand to the Wimbledon Theme, Mastermind and more.

Alan Hawkshaw’s & Brian Bennett’s work has now become the go-to place for sampling in music today. Artists From the cool side of the tracks such as Dilla, Nas, and the XX, right through to the billion selling Kanye’s & Drake’s of this world, have taken Hawkshaw’s and Bennett’s immaculate beat-driven soundscapes for their own usage. Who’d have thought that Drake would utilise Brian Bennett’s drums from a 1975 KPM album for Summer Sixteen? On top of that, in his guise of The Mohawks, Alan Hawkshaw recorded one of the most definitive and important funk break records of all time, one that would become a template for the origins of hip-hop and an anthem to Kool Herc and all the great block party DJ originators in 1970s New York – The Mohawk’s effervescent dancefloor shaker The Champ.

A brand-new album release from Alan Hawkshaw & Brian Bennett entitled Full Circle will be available digitally and on vinyl via Be With Records from 28th September. The album, in full, iconic KPM style green cover is a return to the laidback jazz-funk that helped Alan and Brian show their library chops. The album is classic Hawkshaw/Bennett, it swings, it grooves, moves and thrills with a flair these two have perfected over years. Standout tracks such as Hole In One, In The Clouds, Interchange, Oasis, On The Nile and Corcovado are no mere excursions in nostalgia, for they carry lots of deft studio work that many a producer would give their right arm for. Hawkshaw’s arrangements allow the drums, guitar, bass, strings, Hammond, flute and brass to swirl elegantly around the 12 original tracks, a masterclass in recording.

The show and the album also coincide with all of the KPM releases from the archive being digitised, re-mastered and made available for streaming and download. From the 1950s KPM releases to the KPM Greensleeves and early 1980’s electronic experiments, everything is now readily available – and available to the public whereas previously only the TV, film and ad execs had access to the LP copies. A goldmine of largely unheard music awaits!

Be With Records are also releasing a plethora of newly re-mastered classic Library albums. From the KPM Library Be With are releasing:

From the Themes International Library there will be releases of:

Synthesizer And Percussion (Bennett and Hawkshaw)

David Hollander’s book can be purchased via the Anthology website. Further news on the KPM all stars gig, exhibition and Alan Hawkshaw/Brian Bennett album can be found via Alan’s Facebook page. The Library Music Film can be followed via their Facebook and Twitter pages.