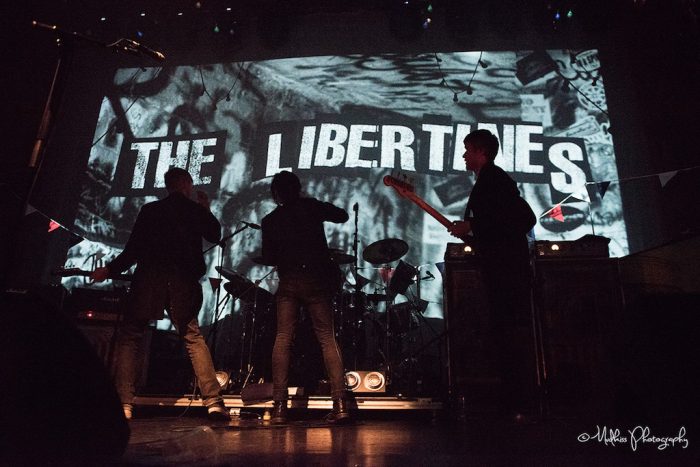 Dan Dixon makes his Louder Than War writing début, reviewing one of his favourite bands in his hometown, local photographer Melanie Smith joins him to capture it all.

When looking through gig listings its quite rare that you stumble across a night where a band are so clearly bigger than not only the venue but the town they are playing, however, due to ongoing renovation work at the famous Empress Ballroom in Blackpool, the Libertines have been forced to postpone a gig on their 2017 “Tiddely om Pom Pom” tour of seaside towns and move inland, up the River Mersey to Warrington’s Parr Hall, a grade 2 listed building and reputable in its own right.

Sandwiched nicely between Manchester and Liverpool, despite the relatively short notice given of just 7 days there was never any danger of this Friday night gig going unnoticed and 1100 tickets were promptly sold out within 3 minutes of going on general sale. Despite the recent heritage of this fantastic little venue, its rare that The Parr Hall is visited by an outfit of the Libertines’ stature so Blackpool’s loss, albeit temporarily as their date has been rescheduled for December, was very much Warrington’s gain.

The night began with a broody set from Bright Young People, a 3 piece band from Rhyl, who have been championed by Libertines drummer Gary Powell and signed to his record label, 25 Hour Convenience Store. While the comparisons to Black Rebel Motorcycle Club are inevitable, Bright Young People were clearly on the bill by merit, and were able to win over a largely indifferent crowd with their unapologetic and gritty set, with the undoubted highlight being latest release Suppress Happiness. Its anthemic chorus and the strength of other songs Liberties and Give Me the Look mean that Bright Young People surely won’t be footing the bill for other bands for long if they can sustain the intensity of their live shows. 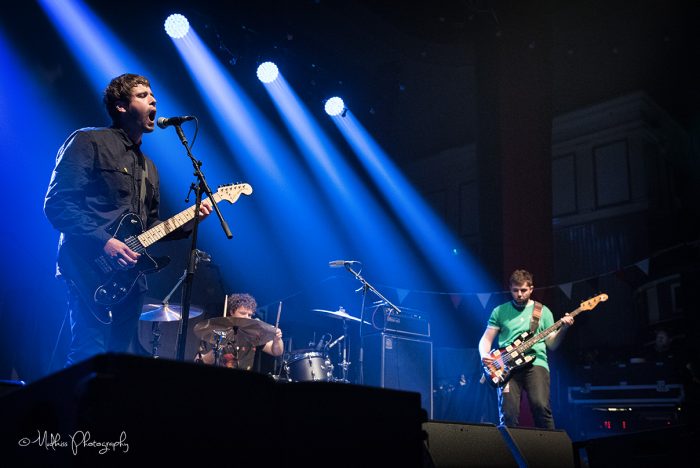 After the bizarre inclusion of a completely forgettable magical act on the bill called the Mod Magician the music resumed with a longer set from Trampolene, another Welsh 3 piece led by charismatic frontman Jack Jones. Jones will have been a familiar face to anyone who saw The Libertines on their 2016 tour after supporting the band and captivating arenas by reading poetry, earning recognition from the NME and legendary Dr John Cooper Clarke. 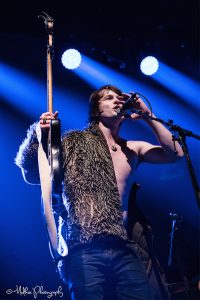 Fortunately for the Warrington crowd the spoken word interludes were still prominent in this more intimate setting, with Poundland and What it Means to be a Libertine being particularly well received. When the musical talent of Wayne Thomas (bass) and Rob Steele (drums) were added into the equation it was clear for all to see that Trampolene were the more experienced and polished of the supporting bands, and while their set was admittedly hectic from start to finish (microphone stand headbutted onto their photographers, anyone?) it was engaging and hugely entertaining. Trampolene sprinted through a number of songs from their forthcoming album Swansea to Hornsy which is out for release on Mi7 next month, leaving the Warrington crowd bouncing and universal in appreciation – these lads are going places.

Almost like the flick of a switch, the Parr Hall then erupted as Gary Powell, Pete Doherty, Carl Barat and John Hassall emerged onstage to “I do like to be beside the seaside” in front of their iconic Union Jack backdrop. The Libertines then played as if their lives depended on it for the next 2 hours, with Doherty and Barat on particularly electric form, seemingly relishing the opportunity to play in a more intimate setting. The pair were all over each other throughout, much to the delight of the assembled Warrington crowd, who had unsurprisingly grown as boisterous as a football firm at the sight of their heroes in town. 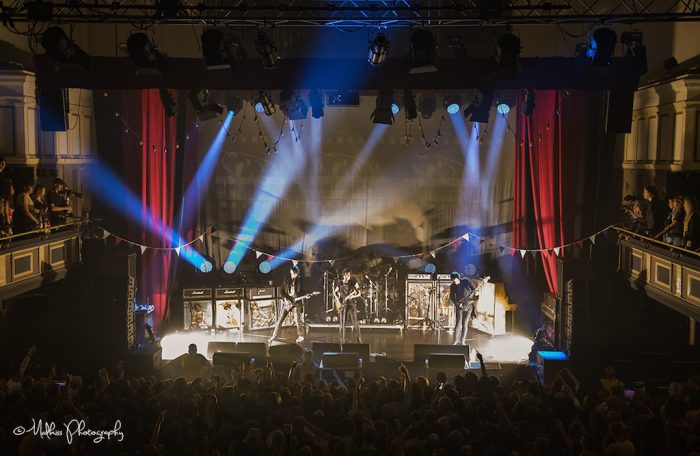 Live staples Vertigo and Horror Show were perfectly blended with the more recent Gunga Din and I’ll Be Your Waterloo, with each song from 2015’s Anthem for a Doomed Youth being duly lapped up by the adoring crowd. Carl joined the front rows for his section of old classic What Katie Did and was swiftly replaced onstage by a fan who walked up to Pete and gave him a kiss, perfectly capturing the love and appreciation that was the air throughout their 2 hour set. Punctuated by resounding chants in support of Jeremy Corbyn, a particularly good rendition of Music When the Lights Go Out surely convincing any neutral bystanders that The Libs have still got it after all these years and deserve great credit for enduring as a band and remaining relevant 20 years after their formation. While Up the Bracket and Time For Heroes unsurprisingly nearly started a riot, Can’t Stand Me Now and Don’t Look Back Into the Sun were the undoubted climax of their set and as the same microphone stand became airborne for a 2nd time and was hurled into the crowd, nostalgic fans were left wondering if the night could possibly get any better.

They shouldn’t have wondered, as when Pete, Carl and Gary returned to the stage for an encore they treated fans to a rendition of I Wanna Be Adored by The Stone Roses, with Pete on bass, Carl on drums and a shirtless Gary giving his very best as Ian Brown. With Brown being born in the town and the Stone Roses of course making their triumphant return in 2012 after a 16 year hiatus in this very same room, the significance of this song choice was not lost on the Warrington fans. While on paper the Libs in this town is as big a mismatch as you are likely to see, the encore showed that the Libertines were enjoying this special night in this cracking venue as much as their fans and this last-minute gig was probably as much for them as it was for us, the lucky few who managed to get tickets.

All words by Dan Dixon, this is his first piece for Louder Than War.