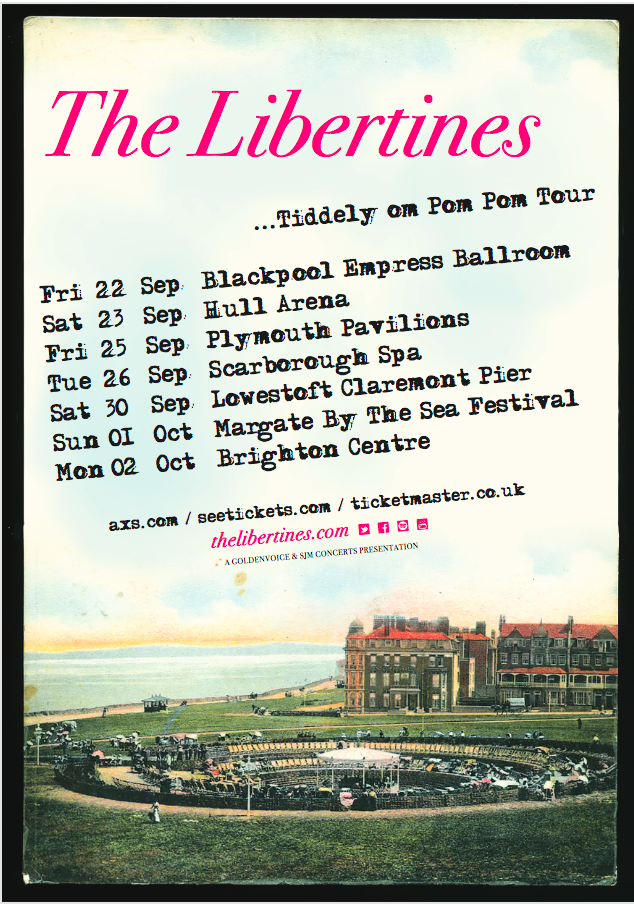 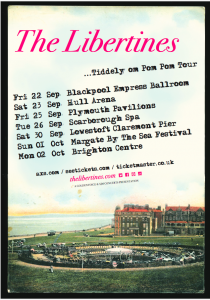 Everyone loves a classic British seaside town tour…and The Libertines are a band steeped in a love of classic English lore which makes them fitting band for the seaside tour…
The Libertines have announced the ‘…Tiddeley Om Pom Pom Tour’ of seven British Seaside towns commencing in Blackpool at the Empress Ballroom on 22nd September and culminating at Brighton – Centre on the 2nd of October. Tickets go on sale 9:00am Friday 16th June and are available from: https://www.thelibertines.com The full dates are:
SEPTEMBER
22nd Blackpool  Empress Ballroom
23rd Hull  Arena
25th Plymouth Pavilions
26th Scarborough Spa
30th Lowestoft  Claremont Pier
OCTOBER
01st Margate  By The Sea Festival (Margate Dreamland)
02nd Brighton  Brighton Centre
The Libertines released their highly anticipated third album ‘Anthems For Doomed Youth’ in September 2015. The album, which was recorded in Thailand, entered the UK Album Charts at No. 3 and received great critical applause on its release.
In 2015 The Libertines headlined: The Reading & Leeds Festivals, T In The Park, along with festivals across Europe in France, Germany, Italy, Poland, Russia, Spain, Mexico, The Netherlands and Hong Kong. The Libertines embarked on their biggest UK tour to date in 2017 with seven arena shows finishing at the O2 in London on January 30th.
Peter Doherty released his latest solo album ‘Hamburg Demonstrations’ (December 2016). Carl Barât & The Jackals released the ‘Harder They Fall’ EP in May of this year. John Hassall & The April Rainers released their debut album ‘Wheels To Idyl’ (February). Gary Powell continues to tour the world as drummer with the Specials.
The Libertines headline the following festival this summer: Tramlines Festival (July 21st-23rd), Truck Festival (21st-23rd July), Newcastle – Live from Times Square (August 3rd) and On Blackheath (September 10th).
Carl Barât says “We’re looking for a home, one roof for the many splendoured trappings of Arcady, a factory, with a guest house, bar and studio. We do like to be beside the seaside and we hope to find that home on this tour… watch this space …
The Libertines are Peter Doherty – vocals/guitar, Carl Barât – vocals/guitar, John Hassall – bass guitar and Gary Powell – drums.