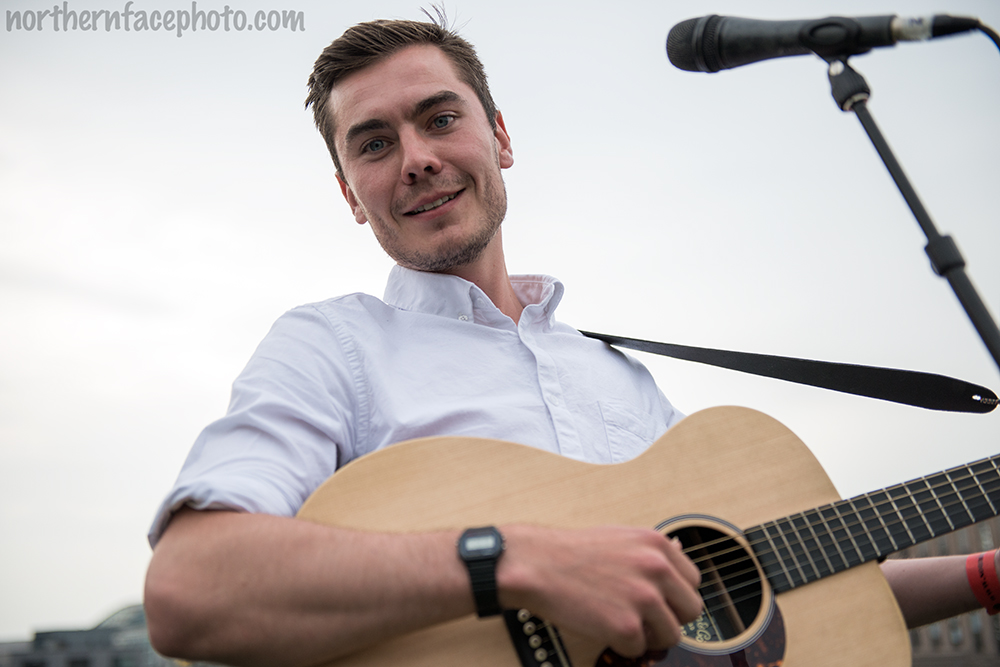 Liam McClair is playing ‘Rooftop Live’ on the top of an old Victorian building on Stevenson Square, Northern Quarter, Manchester. Nigel Carr (words) and Dave Gleave (photos) were in there reporting for Louder Than War.

The place is decked out with bean bags and a few low slung chairs and overlooks the city’s majestic skyline – there is no cooler place to be this evening. Even the rain held off long enough for the two performers to play sets as electrifying as the static shocks that came of the artificial grass carpeting the roof.

Liam McClair is a young singer /songwriter from Wilmslow in Cheshire, he supported Blossoms at the Bungalow club in May this year and stood out for me as a rare and unique talent. He is managed by Ben Taylor who runs the city’s Sound Control venue and is supported this evening by a young female singer called Sobi, she has the sweetest of voices and the biggest electric guitar I’ve ever seen!

I get the chance to talk to Liam before the show…

Louder Than War: When did you start out and what’s the history?

Liam McClair: ‘I’m just 24 and have been playing music all my life, piano and trumpet, and had guitar lessons at 16 and I have always been intrigued by performing but never got round to it. I did a couple of gigs at 18 at a local school charity show, playing like, one song and I was so nervous because I was always the sporty kid at school, playing football.

I did another four or five shows and from that played a place in Liverpool where I went to uni. There was a girl that ran it she said ‘oh we’re doing a thing for Sound City do you want to play it?’ it’s the Dot To Dot equivalent in the city.

Then off the back of that I got a BBC Introducing in Merseyside and it’s like ‘This is crazy!’ – the progress.’ 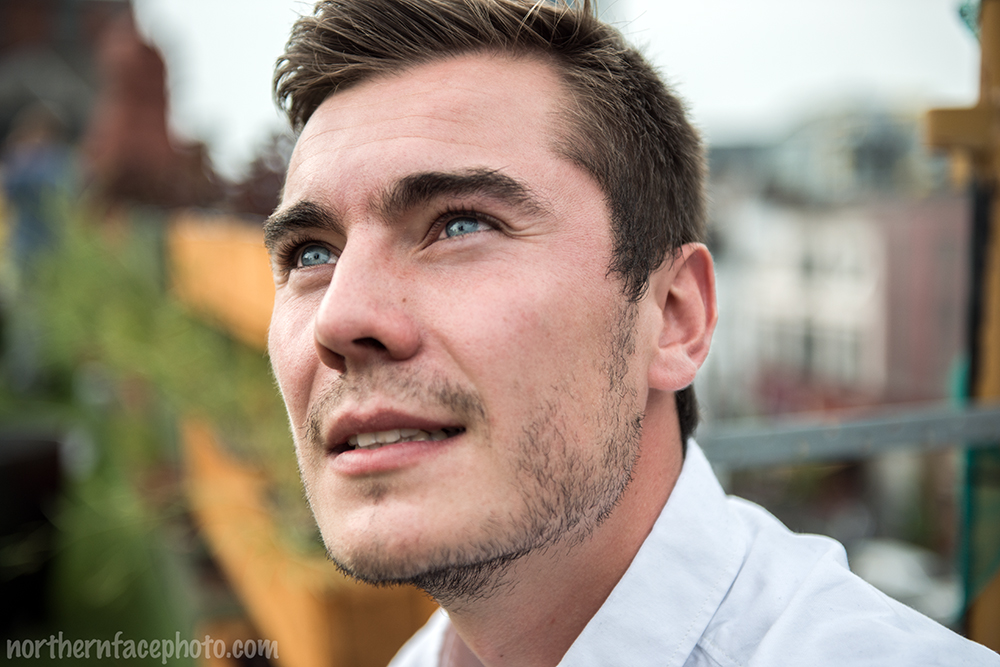 What are your influences? – you have a very special voice

‘My parents are quite young and mum particularly has been in to a lot of current music and what was current to her in the 90’s like Radiohead and Joni Mitchell. Because she has nine older siblings the records got passed down to her – Jimi Hendrix, Fleetwoood Mac and Led Zeppelin. When I was about 17 there was a big male singer/songwriter boom like Paolo Nutini and James Morrison, especially Nutini – I remember thinking ‘he’s a really good guy’, because he’s Scottish and my family are too.’

I did notice a slight accent

‘People say that I have a little bit of a Scottish accent but I don’t notice it, so I don’t realise but I must have! When I first started to write I listened to loads of Nick Drake, he was the biggest guy that made me want to write. He was really, like an enigma, didn’t play live and had a legendary status.’

What’s the bit bit of advice you have ever been given?

‘Just keep playing, keep practicing and do as many gigs’. ‘There is never a bad gig’, is probably one – or maybe I’ve read that somewhere. You can come off stage all annoyed but the mere fact you’re reflecting on that means something. If you came off really ambivalent ‘oh it was nothing’, then you wouldn’t feel anything for it so if it’s a good gig you know it went well, if it’s a bad gig then you know what you need to do next time to make sure it’s a good one.’

Have you felt that you would like to circumvent all the hard work and go for something like X-Factor or similar?

‘Not really – people view that as kind of the popular choice for a musician because it’s in the public eye, and they see people like Olly Murs who was successful from that avenue. Personally I’m really enjoying gigging now but if I got to the point where I was not enjoying that then I may consider it, but right now it’s not something that appeals to me.

I don’t disagree with those shows but I can’t watch them myself. From a musicians point of view I just don’t want to do it right now. I really love what I’m doing and I really like the idea of grafting hard to make something. The journey itself is the fun also I don’t want to be ‘X-Factor’s Liam McClair’ – I just want to be ‘Liam McClair’

Who do you aspire to be – who to look up to?

‘I really like James Taylor – I have a record player and I listen to his stuff.’

You’re not signed and you have some CD’s here today – how are you going to release them?

‘There is a couple of ways you can do it; there are distribution agencies that will get you on places like Spotify. You have to have a certain amount of momentum to get signed – I don’t think it works in the way that ‘He’s quite good – let’s give him x amount of money to go and make an album and hopefully he’ll be big.’

Any big shows coming up?

I’ve got a show in September which will be a marker of how it’s going – I played The Castle (Manchester), which I filled which was really cool and then I filled small venue up in Scotland which I couldn’t believe so hopefully this one in Manchester will be a little bigger and so we’ll go from there and see.

Any aspirations to be in a band?

‘Yeh, I have been rehearsing in a band to play solo on a Saturday night – it’s good to have something of a beat behind you so I quite like the idea of having a band and writing some big songs.’

What about the future – do you have any festivals lined up?

‘I’m on BBC Introducing Manchester 27th June and playing Headlander and getting this band sorted during the summer.’ 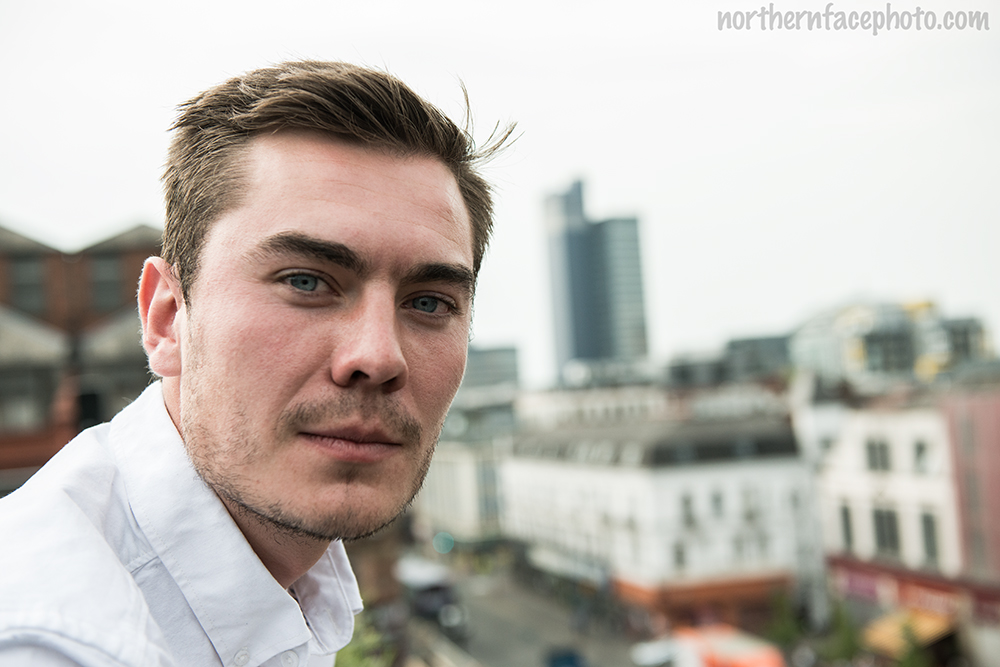 Sobi takes to the small stage at the end of the roof and treats us to half an hour of beautiful songs accompanied by her, (relatively), large electric guitar. This includes the haunting Devil – ‘take a hint and let me be’ and an unexpected but amazing Spice Girls medley.

It’s been threatening to rain all evening but thankfully it holds off long enough for Liam to deliver his set. It’s a wonderful collection of cleverly written and polished melodies delivered from a small stage at the front of the roof over looking the street below. Liam has a very natural and easy rapport with the audience which sees him explaining each song’s origins before singing them. He’s an incredibly likeable performer with a big smile and relaxed manner and each song is delivered with his enchanting vocal sung straight from the heart. He accompanies himself with an acoustic guitar which is amplified through the rooftop’s PA system.

He opens with Honest, a love song with a divine chorus, a tale of love and deception which really shows off his sometime vibrato vocal style.

He loves to weave stories and Alchemy is a song based on Paolo Coelho’s The Alchemist about a shepherd who sells his sheep. He follows this with a nifty little blues number with a really clever alliterative lyric before launching in to a cover of Joy Division’s Love Will Tear Us Apart. Hearing this on a rooftop in the middle of Manchester with the heavy, leaden skies threatening to drench us gives you a wonderfully immersive, fuzzy feeling, trust me!, enhanced no doubt by the peach and lychee cider being served at the bar! 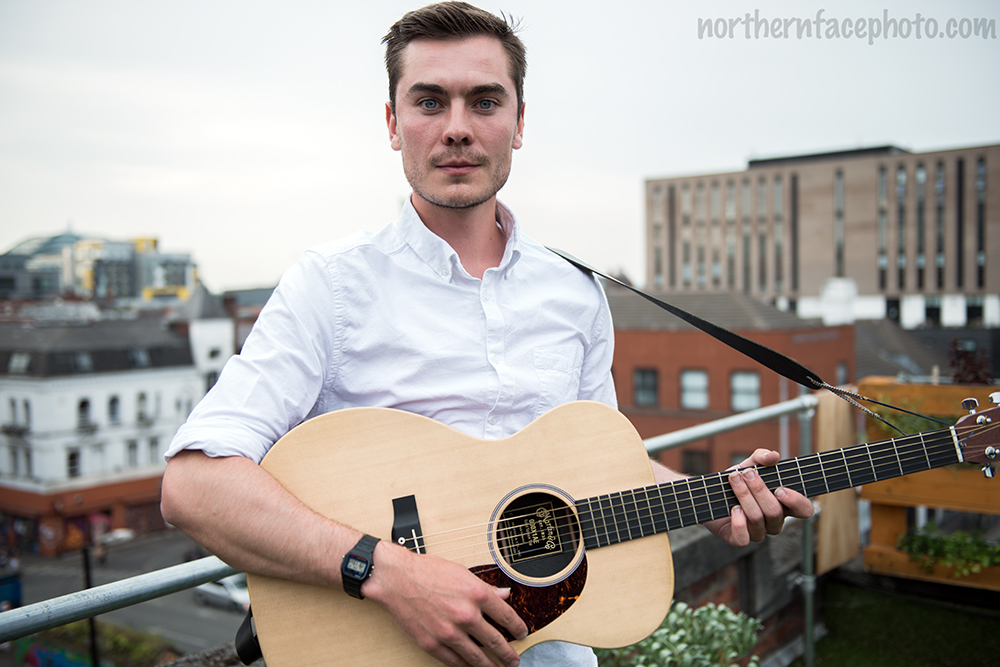 Oh Mary follows which Liam will be performing on BBC Introducing on the 27th June, live with a cellist backing him, then Someday which he will be recording in the studio with a full band.

He closes with Honey, a track that he released last year which combines the lyrical wizardry and class of a young Ron Sexsmith with the heart wrenching yet uplifting vocal delivery of Damien Rice. It’s the highlight of the evening, a really beautiful track and all around are smiling and clapping in appreciation.

Liam is a great artist; the full package – great song writing and that voice combined with pop star looks. With the right break I am sure we will hear a lot more from this talented young man.