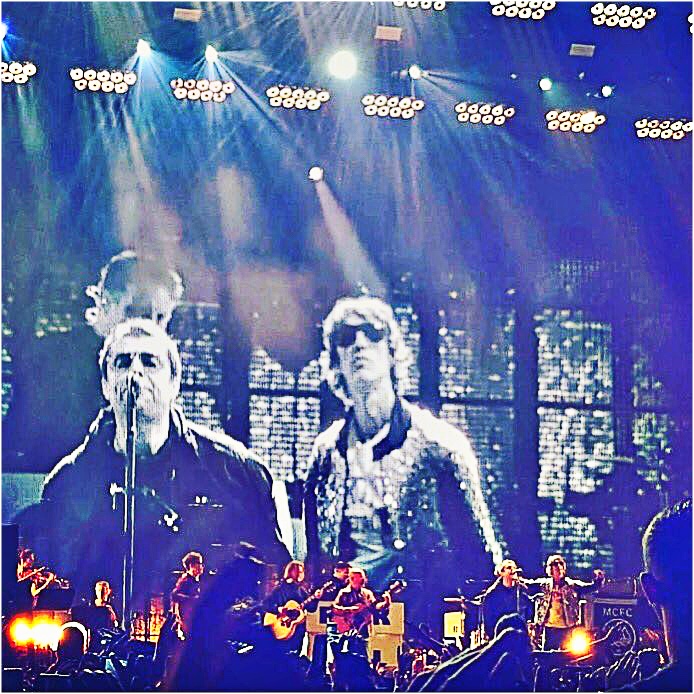 Wayne Carey already reviewed the 18th August 2018 Liam Gallagher gig at Lancashire County Cricket Club, Old Trafford, Manchester  for Louderthanewar here.   But when Mike Robbo – a Hull DJ and music obsessive who also attended – asked if we wanted to share his passionate write up from his Freak Scene Blog, how could we refuse….

This was quite simply the most amazing evening’s entertainment I’ve ever seen. I know, I know, I often enthuse about a gig being the best ever, but three days later, and I’m still buzzing, and obsessively watching YouTube footage of it. Liam Gallagher and Richard Ashcroft’s continuing bromance was absolutely magnificent in every way possible. It’s the fucking dream team. And every second from Lord Ashcroft setting foot onstage to his reappearance at Liam’s insistence during the magically-executed, 50,000 people group-hug of Live Forever at the end of the night was a thing of pure beauty.

The Roses’ gigs at Heaton Park in 2012 were monumental. It was a nostalgia trip by a band playing songs that were all around 20 years old, and we loved being taken back. And again. And again. Then, watching them disintegrate in front of my eyes in Leeds in 2017 was just fucking painful. And painfully inevitable. And people were starting to get seriously pissed off with them not coming good on their promise of a new album. Looking back on it now, yes, it was hugely enjoyable, but how many more times were we going to shell out 60 quid to see the same set? It was becoming increasingly clear that it was indeed everything they promised it wouldn’t be: a massive payday. I don’t begrudge them it, but it was getting a bit tiresome, despite the great handful of classic gigs. But a bit of me died that night in Leeds last year.

And then, as if by magic, and in a totally unexpected moment of synchronicity, an orange-parka’d hero marched over the horizon to reclaim his crown from the heroes who’d inspired him to form a band in the first place.

Of course, I’m not daft enough to think that there isn’t any nostalgia involved in the reemergence of the former Oasis singer and erstwhile figurehead of a generation. There most certainly is, as will be evidenced by this evening’s proceedings, but both of these behemoths of 90s music are very much still active and arguably producing their best material for years. People are here for Oasis and The Verve, and they get it, but the new material is greeted with almost as much fervour. This ain’t no Roses cash-in, this is a victory lap for the younger Gallagher after achieving the unthinkable and coming back stronger than ever. Ashcroft gives it a million per cent as usual too, this isn’t two middle-aged rock stars going through the motions. It’s inspirational and there are pockets of three different generations of people visibly moved to tears. There are granddads with their kids and their kids with their kids. It’s truly for the people. And the people fucking love it.

I had a ticket for Liam’s Finsbury Park gig back in June, but sold it ‘cos I couldn’t really be arsed to go all that way, even if it was for him. The announced support was ok. I love DMA’s and Dream Wife, but I’d have been looking at at least a 500 quid round-trip with travel, accommodation and sundries, so got rid on Twickets. When Richard Ashcroft was announced for the sold-out Manchester gig, I just had to get a ticket, which proved quite easy as a friend had four, but couldn’t go and couldn’t get rid. I snapped them up immediately without thinking about how I was getting there. I’d seen Ashcroft three times in the last year, and each time had been colossal, life-affirming, semi-religious experiences. Sounds clichéd, but some shamanic shit was going on up there whenever he was onstage. I saw The Verve a load of times back in the 90s and when they reformed in 2008, and Captain Rock is one of the most captivating performers out there. Add Liam into the mix, and this was going to be a fucking monumental gig. I saw Oasis a nice, round 30 times, and Liam solo last year, so I was more thrilled with the pairing of the two, rather than going to see Liam again. It was more or less a joint-headline gig for me. A dream line-up, but Ashcroft was what got me interested in this gig in the first place.

I’m aware that me enthusing about the pair of middle-aged rockers will be sneered at by the self-appointed arbiters of cool, but they can suck my dick, I’ve really got zero time for minuscule-minded music snobs, in fact I find it rather comical the lengths that the cool kids go to register their distaste of Oasis or Richard Ashcroft. Besides, I am middle-aged, and the music of my youth excites me like the music of everyone’s youth will when they reach middle age. And apparently, no fucker told the 50,000-strong crowd packed into Old Trafford Cricket Ground that it isn’t cool, no one gives a fuck. People of all ages, which suggests that, if anything, Liam’s fanbase has actually increased. The majority of the crowd seem to be in their 20s. Well, it’s probably a 50/50 split between 20-somethings and 40-somethings, but we’re in the thick of it, down the front with the kids.

So, I got a lift, and we piled down the M62 from Hull, in record time, arriving at the ground within 2 hours of my mate, Wes leaving work at 3pm. Around the ground are the usual Stone Island and Adidas-clad wideboys, and it’s a good atmosphere; people sharing their booze and anecdotes, good-natured regional joshing and football rivalries. It’s quite unlike the latter-day Oasis gigs where the atmosphere was a bit dark and cocaine-heavy. It’s more like a rave with the ‘whats yer name? Where yer from?’ camaraderie. So far so good, so we make our way to the ground just in time for Bugzy Malone who takes the stage at around 6pm. The Manc rapper is good enough, and it must be a buzz for him to be playing his hometown on such a big stage, so fair play to the promoters or Liam for giving him the chance, but you can’t help feeling he’s playing to a tough crowd who are there to see their heroes, but he does a good job and oozes passion. We get a drink and barge our way towards the front for who we’ve come to see.

The great atmosphere continues inside as we make our way to the front. We get into conversations again about where we’re from and our favourite football teams. Obligatory Oasis fans’ ice-breakers. Years ago, it may have resulted in a slap in the chops, but it’s all good-natured, although my admission of being a Liverpool fan in Manchester is met with laughs of, ‘fuckinell, you’re brave.’ The place is almost full to capacity when Richard Ashcroft takes the stage, which goes to show that it’s almost an equal billing in everyone’s minds. As well as ours. Truth be told, I was initially more excited about seeing him, and by the end of his set, I was still of that mindset.

He comes on to little fanfare and opens up with On Your Own, Just him with an acoustic guitar. The A Northern Soul classic is a welcome addition to his set, and it probably marked out the point when he wrestled his vision of The Verve from Nick McCabe, the point where guitar wigouts were eschewed for more melodic, song-based efforts. Anyway, it sounds majestic, and 50,000 people are instantly paying attention. Next up is Sonnet, which, if the opener was alien to some of the 50,000 throng, was quite the opposite, eliciting a mass singalong; the ‘yes there’s love if you wannit, don’t sound like no sonnet, my lord,’ refrain deafening as we’re in familiar Urban Hymns territory, and everyone’s at it, Richard milking it, egging us on, willing us to lose ourselves in the music. We duly oblige.

I’ve been raving to anyone who’ll listen about Ashcroft as a performer for the last 18 months, as he washed away a lot of the shit in my life last year when I saw him, he’s just got this magical quality, like he’s some mad emotion and energy conductor, pushing love into you and taking away your pain. It’s hard to explain, maybe he’s just a fucking great frontman. There’s no denying that, but when I see him, I feel something more. People probably think I’m being a pretentious dick, but I know what I feel, and this geezer is doing something fucking special up there onstage, and today, the people are feeling it too.

And if you want to read the rest… this is only about halfway….. go here to Robbo’s excellent Freak Scene Blog and tell him Louderthanwar sent ya.

Picture -taken from The Good Rebel