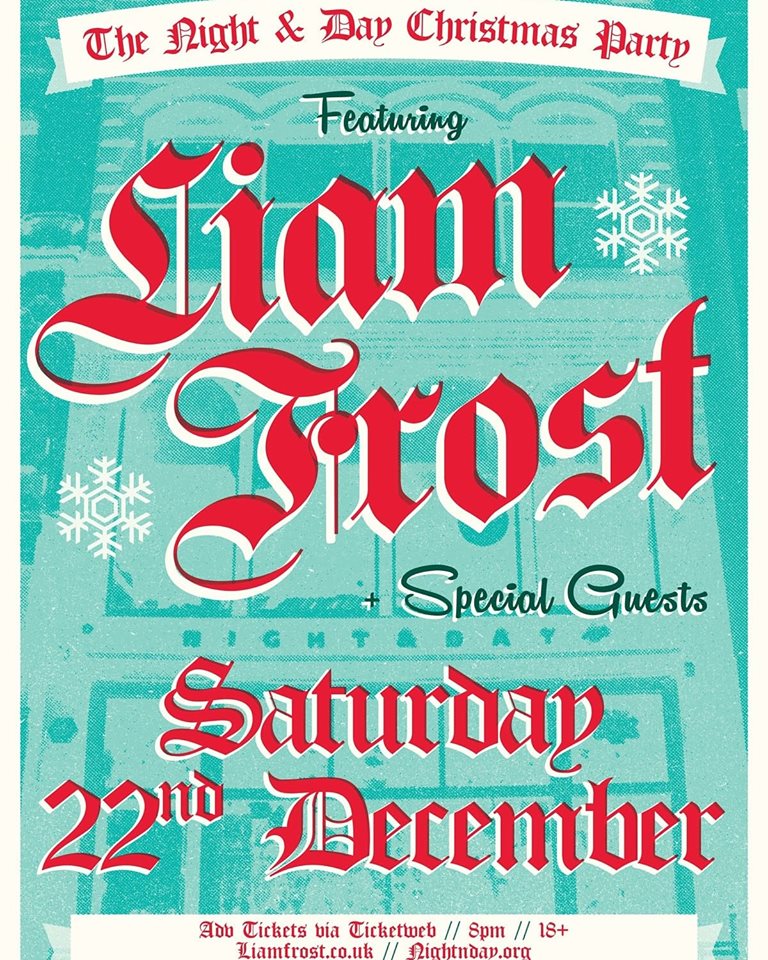 Liam Frost brought his Latchkey Kids album and full band to the Night and Day on the Saturday before Christmas for a not-so-festive Christmas party. Support came from promising singer-songwriter Frank Sims.

It’s a tough slot opening for a local hero as loved as Liam Frost but Frank Sims is made of strong stuff. Unperturbed by the chattering at the bar and with the promise of no festive songs he disarms the crowd down the front with some deliberately crafted songs about love, loss and how friends and gin get you through bad times. Tracks like Corners Of You and Astoria have a well-observed thoughtfulness to them whilst Angie genuinely captures emotions of a relationship. His voice isn’t the most aggressive or emphatic but it’s his softly-spoken approach and willingness to talk about his songs that generates an empathy with those willing to listen and not compare Christmas jumpers or size of turkey they’ve bought at the back.

“These are some of the most depressing songs ever, fuck your Christmas” Liam tells us a couple of songs into his set to huge cheers from the assembled crowd. No one goes to watch Liam to sing along to meaningless glib platitudes, his songs are to envelop yourself in, relate your own experiences to his own revelations and to together feel that it might just be alright if we stick together.

He’s assembled a rock band tonight to deliver the harder edged tones of The Latchkey Kids in comparison to his previous two loved albums Show Me How The Spectres Dance and We Ain’t Got No Money Honey But We Got Rain. Whilst tracks from those records get the biggest cheers of recognition, the new songs get similar levels of acclaim at the end.

He opens with a series of new songs, as if to make his intentions clear to those at the back. Going Steady’s country-infused rock blends beautifully with his accented vocal while Hall Of Mirrors Rope Of Sand sees the band let loose battling against some on-stage sound issues to add a hard edge to proceedings. Didn’t It Rain and in particular Mercy Me have tinges of country to them, but the sort that looks you square in the eye whilst Who’s Gonna Love You feels like it’s on steroids with the band compared to the slower quieter solo versions he’s played for a few years.

The solo section really tests the audience’s listening capabilities and splits the crowd between those tied up in their own thing and those whom Liam has eating out of the palm of his hand. Rightly, given he’s brought a band together, this section focuses heavily on Spectres and even gives us a nod to the festive season with a dash of Last Christmas. The likes of Try Try Try, Is This Love, If Tonight We Could Only Sleep and The City Is At Standstill are engraved on the hearts of those who consider, like us, Liam to be up there with the city’s most feted lyricists of drinking and doom and as most of the front rows mouth back every word, you can’t help but wonder why he’s still playing these tiny venues and not the academies and bigger halls.

The band return for the set’s finale, again heavily focused on The Latchkey Kids with lead singles Smoke and The Slow Knife as well as the album’s most fan-acclaimed track Pomona. The band add depth and power to the songs that make this record not shirk in comparison to its more beloved older friends. There’s a wistful beauty to Follow You Around, a world-weariness that comes through in Liam’s voice too. There’s a couple of tracks from the longer-standing fans too. The Mourners Of St Paul’s is sung back to Liam with a drunken gusto that’s reserved for ubiquitous singles of more successful bands without losing the emotion of the song’s subject whilst Skylark Avenue ups its game to compete with the new kids on the block around it.

As it’s Christmas and Liam’s fuck you was very much with tongue firmly planted in cheek, he leaves us with a singalong of Santa Claus Is Coming To Town and even our ice cold heart is melted enough to forgive this celebration of something so very un rock and roll.

The Latchkey Kids songs have been played in different ways now, but each time they unravel new things about themselves. They can take the bruising and battering of a rock and roll set like tonight as nonchantly as they wrap themselves round you when stripped back. That’s the ultimate testament to great songwriting and fifteen years on Liam Frost is still crafting songs of timeless quality that connect to the rawest of human emotions in the same way his more celebrated peers are lauded for. He is still this city’s best kept secret after all this time.