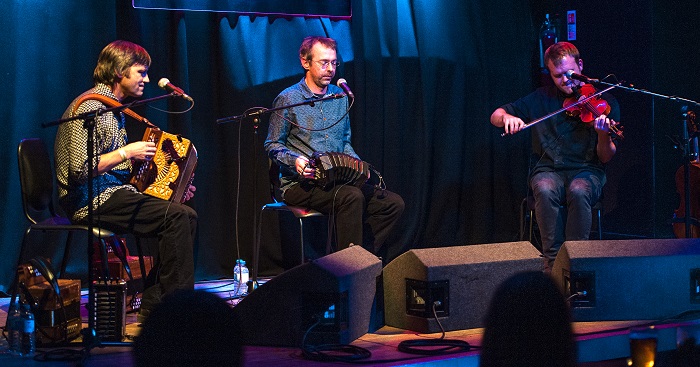 The trio of Sam Sweeney, Rob Harbron and Andy Cutting who make up Leveret, open up the tour in support of their Inventions album in Manchester’s Band On The Wall.

Not the regaular sort of venue for Leveret but one that saw them taking up the challenge of taking on a funky city centre club rather than a more traditional folky sort of scene. Not that the Band On The Wall isn’t at home to music of the folky variety, especially when it supports its roots music and is also the recent recipient of a large funding award. Particularly gratifying when live music venues always seem to be walking the tightrope of closure. Anyway.

With a healthy turnout and an interesting quick check over the demographics revealing, and there’s no way of saying this politely and politically correctly without offending anyone…but there did seem to be a decent proportion of ‘younger’ people in attendance. Possibly a delegation from the student body of the Royal Northern College of Music having nipped down Oxford Road to see how it was done. It may even have been a reflection on the need to get out of the house to avoid the ordeal of watching England’s footballers continue on their all-conquering, yet ultimately disappointing when it comes to the finals, World Cup qualification campaign.  Whatever. It even necessitated releasing the velvet rope to allow access to the upstairs area as the throng swelled, in need of some feisty folk gratification. 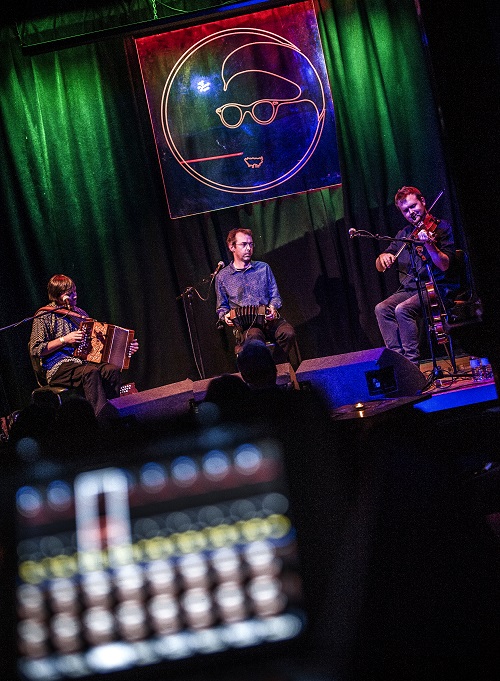 With the new album Inventions being reasonably fresh, as fresh as a band who successfully met the challenge of writing all the tunes on said album, there’s now a better balance to the repertoire as opposed to their previous method of digging into the deepest and the dustiest tunebooks to find and breath life back into long forgotten gems. The new material played live was full of bright vigour and of course the banter between the three of them about song titles and writing methods – usually involving singing into a phone on a walk and then finding a suitable apt (or not) title.

Live, Leveret are very much about inviting you in on a session with three consummate musicians  who weave  the tunes on a meandering and winding journey – it’s a delight to observe  the fascinating Leveret trademark of the unspoken interaction between musicians who have a telepathic  empathy and a natural feel and respect. While the set delivered on the quaint and the jaunty and a run of gently undulating creations, The Italian Rant showcased a more sobre and sombre side, with a reminder from Rob that despite the three microphones set up, “we don’t sing.” No great big join in choruses or singarounds as you’d normally expect at a folky gathering. Not that they need to at all. There were more than enough knee tapping moments; in fact you could try the Sam Sweeney patented ‘knees together and bounce in time’ dance. The seated version of what some may recall of his more energetic performances in the Bellowhead days.