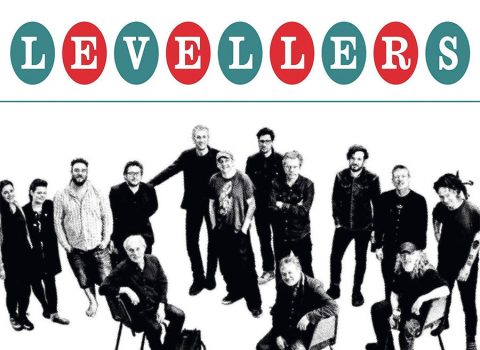 Celebrating their 30th anniversary in 2018, Brighton folk-punk band Levellers will be releasing We The Collective on 9 March 2018 via the band’s own label, On The Fiddle Recordings.

Wanting to do something a bit different with their back catalogue, they brought in a string section and enlisted legendary producer John Leckie (Radiohead, Stone Roses) to help develop new acoustic arrangements for eight of their previous singles including Liberty, Hope Street and One Way which they recorded straight to tape at the world-famous Abbey Road Studios.

They also recorded two brand new songs Shame and Drug Bust McGee and the result is the 10 track album We The Collective. Lead singer Mark Chadwick says “The different musicians, producer and the studio combined to make something really special”.

The video for Shame is a topical, hard-hitting piece showing the plight of refugees in Europe and beyond, in the face of geo-political manoeuvrings from our world leaders. You can watch that here:

We The Collective: The Album

There’s  pre-order available on all formats & bundles, including a limited number of signed copies available

You can also watch a mini documentary about the making of the new album with interviews and behind the scenes footage. Check it out here:

As part of the celebrations, Levellers will head out on a full Acoustic Tour in the Spring where they will be playing the new arrangements with guest musicians, starting at Glasgow’s Celtic Connections festival. They will play at the Roundhouse in London as part of the In The Round festival as well as a number of theatres and concert halls around the country. Support on the tour comes from Ginger Wildheart on all dates except Glasgow & London.

Support from Ginger Wildheart (all dates except Glasgow & London)

Sun 4th – London, Roundhouse (In The Round Festival)