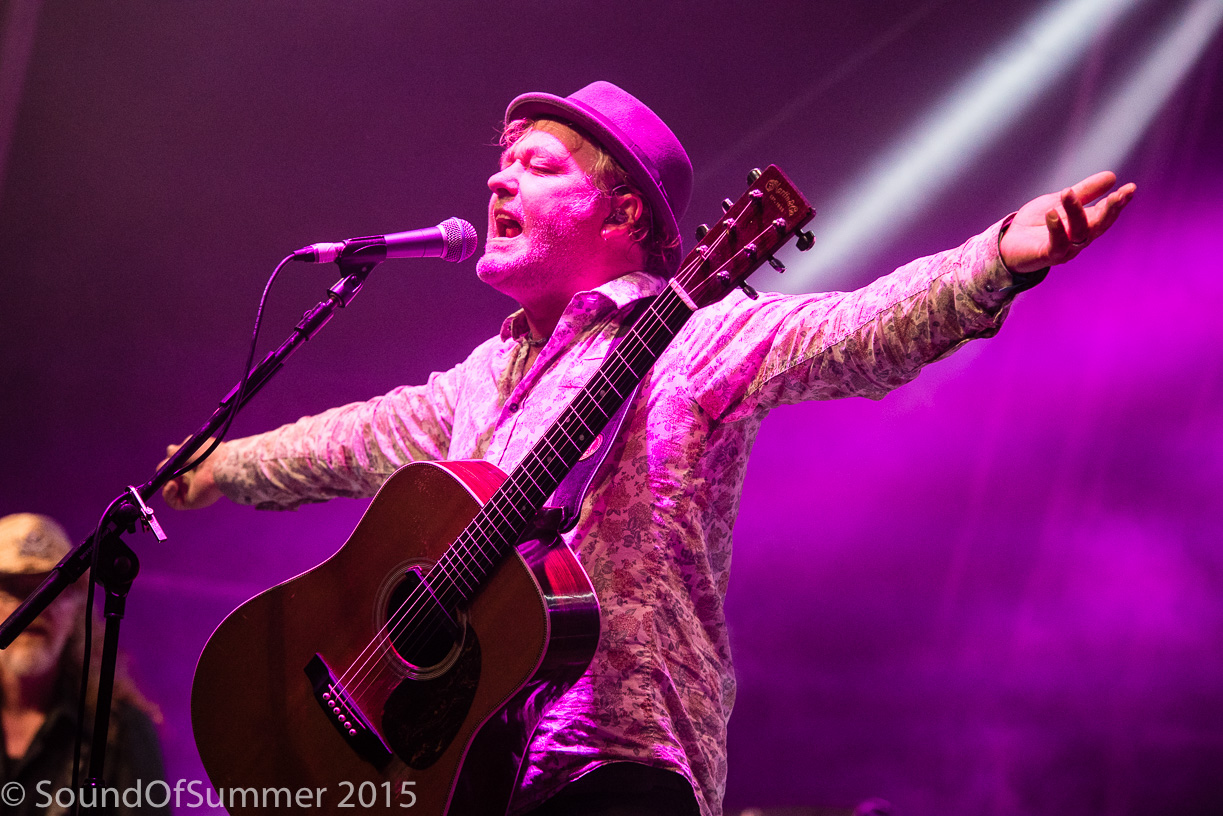 It was the last show of The Levellers’ legendary ‘Beautiful Nights’ Tour – and I was prepared for things to be a little bit on the wild side. After all, this band is known for their anti-authoritarian, rock-folk vibes; they’re named after a 17th century radical democracy movement after all. You might recognise them for their 1990’s feel-good track ‘What a Beautiful Day’ thumping out over the alternative radio, or their known notoriety – including a life largely living in trucks, their 1994 appearance at Glastonbury and previous infamous tors including ‘Freakshow’ and ‘Chaos Theory’. But more than 20 years since those energetic, establishment-sneering albums such as ‘Levelling the Land’, I was curious to see how the current 6-piece would bring together their old favourites, as well as some of the tracks from their latest album ‘Static on the Airwaves’.

Even before the gig, the mood was edgy, adrenaline flowing all around. It was only a matter of nights after the Tory-led intervention into Syria, an Establishment movement which was particularly anti-Levellers. The weather was brutal and Northern; an angry wind and lashing rain pounding down on Blackpool’s Empress Ballroom. The venue’s grand Victorian interior had been given a thematic folk-revamp, feeding on the energy and tension. Bass player Jeremy Cunningham’s frenzied and fabulously twisted folk artwork featuring laughing sprites and smoking monsters filled the set. This was set to be a concert of cultural chaos, and with their latest album containing anti-war tracks such as “The Recruiting Sergeant” with references Hercules Transporters and he province of Helmand, it is easy to see why. 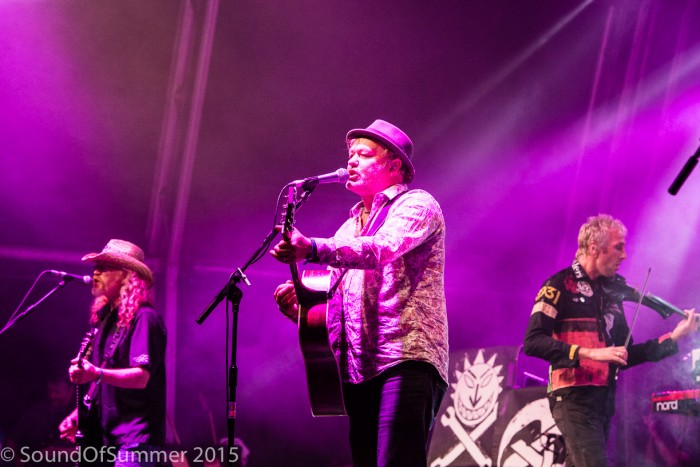 The audience were an eclectic combination of ages – some in their forties and fifties, likely following from The Levellers in their nineties heyday – others young and perhaps yearning to experience that same power of the past.  Yet everyone was cramped together, the shared whispers of ‘I hope they play Battle of the Beanfield’ (a central gig anthem) and ‘when do you think they’ll come on’ – running high. As the support acts played out, Dreadzone and Ruts DC, dreadlocks were dripping and pulses were pumping.  These bands certainly added to the atmosphere, with the punk rock of Ruts DC and their famous ‘Babylon’s Burning’ having the audience chanting within a matter of minutes. The largely standing-only space was rapidly filling by this point; by the time Dreadzone were on the stage, the front was already transformed into some kind of wild dance pit. Dreadzone’s reggae-inspired punk was utterly unique, combined with the weird, almost-ghoulish chants from singer Spee (also known as MC Spee). As the Doors had opened at 7pm, by 9 the crowd were well and truly craving the big act.

And The Levellers certainly didn’t disappoint. Crashing onto the stage came Mark Chadwick battered, guitar in hand, pierced ear and eyes glinting. Jeremy Cunningham followed, legendary dreadlocks swinging, whilst John Sevink slipped on, a tall thin figure with a fiddle like a weapon. The guys were grinning, the multi-instrumentalist Simon Friend throwing his arm up at the crowd as drummer Charlie Heather and keyboardist Matt Savage made their arrival. We were certainly in for a ‘Beautiful Night’. 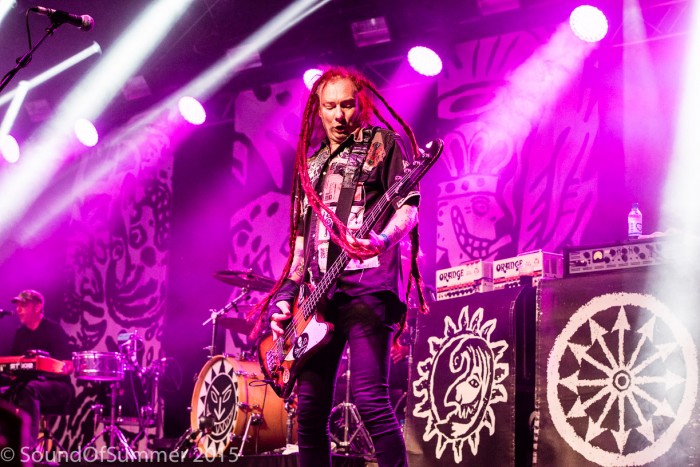 And it erupted into opening with ‘England My Home’, a furious drive of fiddles and guitars gearing round Chadwick’s cries of ‘England why do I feel like rubbish on your streets’. The following track came with delicious contrast – the more pop-folk features of ‘What a Beautiful Day’ making the audience ride the waves of emotion. The set list was a story of old and new, as recent tracks such as ‘Truth Is’ bled beautifully into favourites of the past such as ‘Dirty Davey’.

Particularly enjoyable was seeing how the band performed their most recent pieces such as ‘Mutiny’; the bass played with Cunningham’s energetic conviction, perfectly topped with the angry yet articulate fiddle of Sevink. The feature of the fiddle is a staple in The Levellers’ music, and in a venue like the Empress Ballroom, it echoed like a rallying cry, brought to life by the hands of a master-player. The Levellers are a band proving folk-sound doesn’t have to be old-fashioned and ‘easy’. The audience were riding waves as thrilling as the sea outside! Perhaps this was the energy of old and young alike the band were looking to tap into; after all, they brought back many of their older tracks rather than opt for the newest album. It might have been interesting to hear a few more, but it’s hardly a criticism.

After all, it’s the enduring appeal of The Levellers which is so outstanding, as well as their ability to endear an audience. We were treated to a truly spectacular rendition of ‘This Garden’, with a neon-painted digeridoo player prancing around the stage amidst an immersive light show. The set was artistically executed and put the audience, as much as band, at the centre; covering us with paper streamers, strobes and sound. And we deserved it! Our chaotic chant of ‘Carry Me’ earned the comment ‘Best ever!’ from Chadwick! And The Levellers certainly deserved praise themselves too; for the set was varied and vibrant, with plenty of movement across the stage, Sevink and Cunningham even standing at height to show off their instrumental skills. 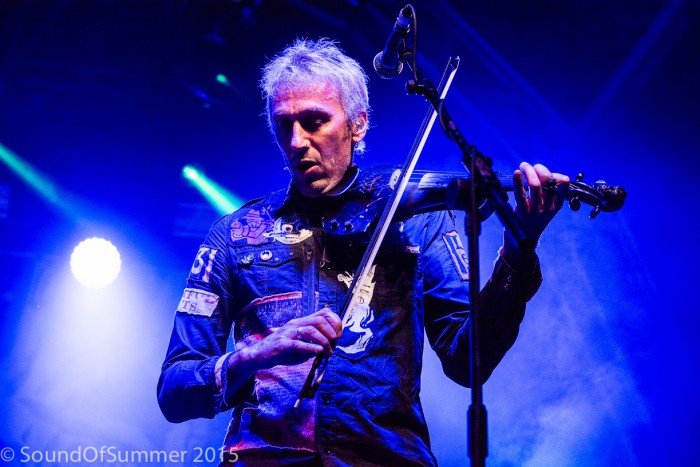 The gig came to a close with an encore of two legendary anthems, as if a homage to all those who have followed them throughout the years (they actually have a famous gaggle of followers called ‘The Happy Hitchers’) and we threw ourselves into a thrash of driving drums and Simon Friend’s hoarse, heartfelt lyrics  on ‘The Battle of the Beanfield’.   Then drink and dancing went up in the air for one final, head-banging time. ‘Liberty Song’ seemed an appropriate end to the evening, the rallying calls of Chadwick and Friend leaving us feeling certainly liberated! This was a sensation the band appeared to be sharing, their chemistry still staying tight, wiping sweat across their smiles. They may have been anthemic in the nineties, but they’re still amazing now.

Although the Blackpool gig draws an end to their set list this year, you can still catch The Levellers in Lowesoft in March, before they leave for their greatly-anticipated appearance at the Zeltik Festival in Luxemburg.  These guys certainly get around, proving their kind of ‘Static on the Airwaves’ is certainly that of the best, atmospheric kind. They’re one of my favourite bands to tune into. Think energetic punk-rock combined with an explosion of folk. Catch them if you can.

All words by Emily Oldfield.  You can read more by Emily at her authors archive.