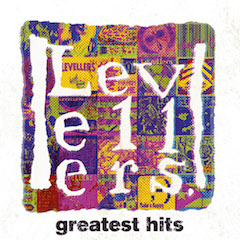 Levellers have announced the release of ‘Greatest Hits’ on 29th September 2014 via their own On The Fiddle Recordings label. Released on three formats (CD/DVD/DIGITAL), all versions include every Levellers singles & video released over the last 25 years (of which 20 were chart hits), together for the first time.

From the folk punk roots of Carry Me, through the anthemic One Way, Fifteen Years, Hope Street, Just The One and smash hit Beautiful Day, to more recent tracks such as Truth Is and Cholera Well, after more than 25 years together as band, the Levellers’ mix of scathing political comment and positive DIY attitude to life hasn’t dissipated with age.

Most exciting of all, the Greatest Hits album also features 4 brand new recordings of the Levellers collaborating with contemporary artists to rework some of their classic material. Imelda May is the queen of all time on ‘Beautiful Day’ (which will be formally released as a single). Bellowhead take on ‘Just The One’ and the legendary Billy Bragg performs ‘Hope Street’. Finally, Frank Turner breathes new life into ‘Julie’, one of his very favourite songs whilst growing up, bringing us back full circle for another generation of the disenfranchised to discover the Levellers for the first time.

UK Tour, with support from The Selecter (performing ‘Too Much Pressure’)

To celebrate the release of Greatest Hits, Levellers will embark on a European wide Greatest Hits tour In October and November performing some of these songs for the first time in many years with special guests The Selecter on all UK dates plus solo multi-instrumentalist Laura Kidd aka She Makes War.

Influential and platinum-selling 2-Tone veterans The Selecter returned in 2011 fronted by the original singing duo of the female icon of the 2-tone era Pauline Black and Arthur ‘Gaps’ Hendrickson. The dynamic and impeccable duo take centre stage in what is arguably the band’s best line-up since the original one. Their debut album Too Much Pressure, featuring the hit ‘On My Radio’, remains a classic touchstone for a generation of ska lovers and they will perform it in its entirety at the shows.

As well as the Greatest Hits release and huge tour this year for Levellers, a film about their rise to fame in the 1990’s ‘A Curious Life’ had its premiere in June 2014. Told through the unique perspective of Jeremy Cunningham, the band’s bass player and artist, and directed by former Chumbawamba frontman Dunstan Bruce, the film focuses on the Levellers phenomenal success between 1988 and 1998 before they disappeared for a time in a train wreck of drink, drugs and creative drought. However, despite reaching their lowest ebb, the band never split up and after a few years in the wilderness they re-invented themselves as a self-managing collective with their own studio, label and Beautiful Days festival and in the process became unexpected survivors of the UK’s famously fickle music industry.

Featuring The Selecter & She Is War on all UK dates

On sale Friday 04 July 2014 via gigsandtours.com