Home Blogs Letter From America : unseen Kurt Cobain photos remind us of the... 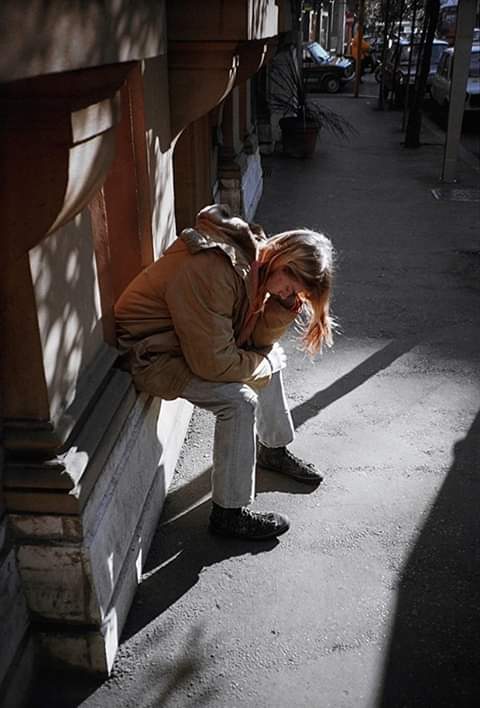 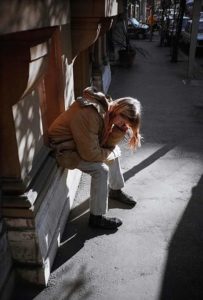 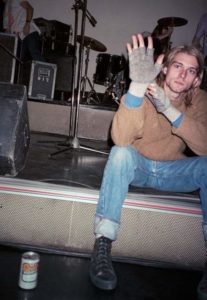 Letter From America: All I’ve Got Are These Photographs…

Friday, 5th April: 25 years since Kurt Cobain took his own life. Social media was filled with many posts, reminiscing and honoring the figure whose words and music managed to jolt a generational nerve and unite/excite masses as few are gifted enough to do. Days before, the concluding episode of Epix’s Punk docuseries, in part, underlined the oft-repeated truism that Cobain and Nirvana finally broke proper punk into the (American) mainstream with “Smells Like Teen Spirit,” opening the door and enabling Green Day, et al, to kick it off the fucking hinges three years later. Now here we were, seeing just how raw the wound caused by his exit – so close to the disappearance of your nation’s own troubled, fragile punk poet of the ’90s, Richey Edwards – still is. With every personal encounter/gig story/anecdote/candid photo posted, it’s easy to see the lesion’s still gaping and oozing. Kurt Cobain left a huge hole in our collective soul.

But the most powerful post spoke not a word. It was by Sub Pop founder Bruce Pavitt, featuring two photos he had personally taken of the single most celebrated musician he’d signed to the label that put Seattle on the map. (Listen to John Robb’s interview with Kurt Cobain from the same tour here)

The first: Kurt seated onstage at some venue – lank greasy hair, a ratty beige sweater, long-sleeved blue undershirt peeking from beneath the sweater sleeves as he waves a gray, woolen, fingerless gloved hand at the camera lens, ice-blue jeans turned up two inches from the black hi-top sneakers on his feet. Near those sneakers: An open beer can. Behind him: A very young Dave Grohl, setting up his own drum kit. “Teen Spirit” must have been yet to be released.

Kurt’s pinpoint pupils tell a story, possibly related to the scared, nervous vibe he’s giving off, still palpable all these years later. Somewhere behind all that fear, however, there’s a note of confidence – this guy’s ready to take on the world.

The second photo looks to have been taken much later. Kurt is seated, hunched over, on the curb of an old, ornate building, carved concrete all around. The street could be a toney old NYC neighborhood, or perhaps one in his safe Seattle home. The positioning of the sunlight indicates it might be 4pm, the beige-and-grey layers he wears indicate fall. And as the world rotates and traffics whizzes past, Kurt Cobain looks utterly crushed. He looks vulnerable, pained, ginormous fame and fortune and the weight of being his generation’s poet laureate/spokesman/saviour has collapsed his delicate shoulders. Forget the shoulders – how about his delicate psyche?

Pavitt extracted both from his book, Experiencing Nirvana. And without saying a word, his photos said everything about what Kurt was experiencing, the negative impact his fishbowl existence was exerting, and how little he wanted this. They’re a gut-punch, poignant as hell. Because most of all, Bruce Pavitt’s photos wordlessly illustrate what everyone who personally knew and loved this enormously talented, enormously troubled young man knew about him, why they loved him. They also illuminate the  enormous loss they still feel. Forget how you felt losing him. These people knew Kurt Cobain. And it hurts them more than it will hurt you that he is gone.

Basically, these photos rip Kurt Cobain from those dorm room posters and throw him in your face. Bruce Pavitt’s photos humanize the icon. They wield a lot of power.

And what of that final Epix Punk episode, anyway? It neatly tied up the whole series. Apparently, England only gets the 2nd, 1975-1979 episode – no post-punk, no UK Subs/Sham 69/Stiff Little Fingers/Undertones/Cockney Rejects 2nd wave, no Mohican gluehead Exploited/GBH/Discharge hardcore, not even Manic Street Preachers or the New Wave Of New Wave. (Geeze, what a shitty moniker! Couldn’t you Brit rockpress hags’ve just admitted you were experiencing punk’s latest wave?!) But in this final episode, American punk manages to transition from Bad Religion and NOFX toiling in late ’80s isolation, to Nirvana essentially showing Billie Joe Armstrong and Fat Mike and Bret Gurewitz they could have hit records, too, as Kathleen Hanna apparently singlehandedly awakens a generation of young women to how moshpit machismo was ruining their punk rock experience, to how they could have a riot (grrl!) of their own. Then the Warped Tour comes along, commodifying punk further for the heartland. But hey! We have new, exciting blood like Ho99o9 and Pretty Vicious out there, right? So, punk’s not dead, right? It’s always gonna have a future, as long as some fucked-up kid in his garage with a pawn shop Squire Strat and Peavey amp is screaming “FUCK THIS!!!” over two-chords, right?

Okay, maybe I’m being overly simplistic and sarcastic here. I did enjoy the episode. I enjoyed the whole series. I love that for once, punk doesn’t end with Sid shoving the shiv into Nancy’s ribcage. For all the necessary televisual condensation, this is as thorough and fair-minded a visual history as you will find. As detailed last column, there’s some beautifully cinematic moments here. This is hardly a low-budget super-8 student film or collection of YouTube clips. I, for one, eagerly await the inevitable DVD box set, hopefully with an accompanying fanzine-style book or CD soundtrack. Gripe all you want. You’re going to, anyway.

This Column’s Soundtrack: Since I wrote this in three separate sessions, a couple of different records fueled the dance my fingers took across my computer’s keyboard. One was G0GGS’ LP II: PRE-STRIKE SWEEP on In The Red Records, yet another byproduct of Ty Segall’s relentless creativity. If you ever wondered how Hawkwind may’ve sounded had they formed in 1977 as a punk band, or what would’ve ensued had Chrome continued the sound they’d honed on their 1st two LPs? This is your jam – lysergic punk rock. The other is the forthcoming Manifesto Records Dead Kennedys box set, DK40. That one features the best live recordings DKs guitarist East Bay Ray could find, all radio airchecks, from 1981 to 1985, as SF’s political punk powerhouses transitioned into high-speed hardcore from their more Ramones-playing-exotica early sound, then progressed to a more high-octane psychedelia before the PMRC hounded them into dissolution. Powerful, musically interesting and exciting, with plenty of Ray’s Echoplex abuse and Jello Biafra’s sarcastic, Russ Mael-esque warbling. Plus the railing against Ronald Reagan’s America does not sound all that dated in Donald Trump’s America.