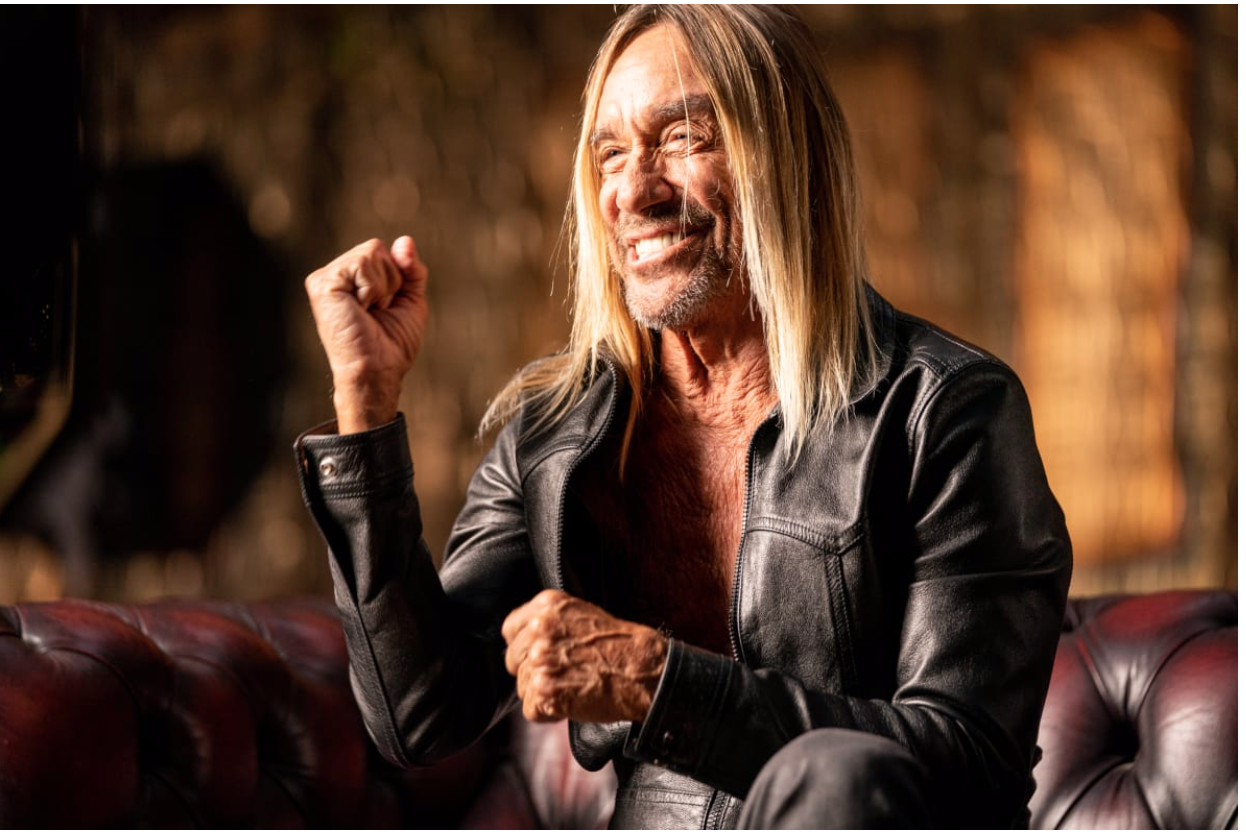 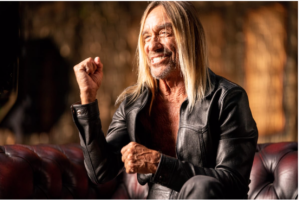 A jackplug from a guitar cable is pushed into a socket on a Fender guitar amplifier, with a click and an electrical buzz. “Punk was born in the late Sixties,” a disembodied female voice declares.

“It has lived this whole time,” the voice continues, revealing itself to be Penelope Spheeris, director of classic LA punkumentary The Decline Of Western Civilization, seated on an antique green leather tuck-and-roll couch that’s seen better days. “And it will live forever. So anybody that says ‘punk is dead?’ That’s the stupidest thing I’ve ever heard!”

Quick cut to some preppy blond American kid, ca. 1981: “Punk rock is DEAD!” And yeah, he is  the stupidest thing ever….

Another quick cut to a slow tracking shot down a Gibson guitar neck. Another disembodied voice, this time male: “Punk’s never been dead.”

“That’s a misnomer,” he continues, now unmasked as Keith Morris, Black Flag’s 1st singer and the only frontman Circle Jerks and OFF! have known. “Punk is not dead.”

“How could it be dead?” a 60-something-year-old Johnny Rotten asks, seated on another antique tuck-and-roll couch, this timed protected by red leather. “I’m still here!”

Another quick cut to 1981 America, and a black kid announcing, “Punk rock is the future for all of us.”

“In the Sixties, you had a lot of short-lived cultural moments,” explains Punk magazine editor John Holmstrom, from a different green couch. “Like folk rock and acid rock. So naturally, when you had punk rock, there was an expectation that it would die.”

“…because there’ll always be some angry kid in his bedroom…,” continues Morris, before tossing the baton to Punk magazine’s Legs McNeil, author of Please Kill Me.

This is the first minute of the debut episode of Punk, the Iggy Pop/John Varvatos-produced docuseries US cable network Epix airs every Monday. This preamble, which quickly dissolves to another montage of historical punk footage of historical punk bands – Blondie, Damned, Dead Boys, Pistols, Ramones, New York Dolls, etc. – and pogoing/spitting audiences as credits unfurl, suggests this will be more cinematic and broad and inclusive in scope than your average punkumentary.

Still, no one will be satisfied. Everyone will argue the piss outta the pros and cons of this ambitious project. Because every punk has an emotional, personal stake in this culture/music/lifestyle. So they’re passionate about it. Plus punk means different things to different people, few of whom can agree on What Punk Is. Witness the premiere event in Hollywood three weeks ago, which (as covered in last week’s Letter From America) saw a very drunk/emotional John Lydon nearly coming to blows with Marky Ramone over the scene’s parentage. As has gone on likely since Richard Hell first took a razor and a jar of Vaseline to his hair, then shredded and re-safety-pinned his shirt. At the same moment an 18-year-old John Lydon did the exact same thing in London. (Speaking of Hell, where the Hell IS HE?! Excluding him is one of this show’s most egregious faults.)

But watch the comments section ‘neath this review snarl at Your Humble Narrator, calling me everything from an idiot to a wanker, questioning what the fuck I would know about punk. Because punk is a contrarian beast by nature. And facts and history both be damned – everyone else has The Truth, Maaaannn about punk. And no one else knows a fucking thing.

The series is only three episodes in, thus far. It comes closer than anything – Don Letts’ Punk:Attitude or Susan Dynner’s Punk’s Not Dead aside – to being definitive, simply by telling the tale in one-hour, episodic chunks and veering damned close to Ken Burns territory. Every episode is a contained story, with every wave of this music/culture documented via a device the MC5’s Brother Wayne Kramer lays out in the first episode: “All bands have an arc,” he says, with a wave of his hand. “Like all things in nature,” he continues, over stock footage seemingly taken directly from one of those old Walt Disney biology documentaries, “something is conceived, it’s born, it grows, it’s nourished, it flowers, it produces fruit. It starts to age, it withers, it decays, it dies – that’s nature! Bands are exactly the same way.”

So are art and music movements. Every weekly installment begins with another jackplug being connected into another guitar amp in loving close-up, and another parade of seminal punk figures – Iggy Pop, Brother Wayne Kramer, the New York Dolls’ Syl Sylvain, Johnny Rotten, Viv Albertine, Legs McNeill, Henry Rollins, Duff McKagan – plopping down on that tatty sofa, telling their story as appropriate archival footage rolls. Hearing Iggy Pop explain “how I became a punk” via hearing The Kinks’ “You Really Got Me” on his Zenith radio in 1964, his bedclothes pulled over his head, over a quick cut to vintage b&w film of Ray ‘n’ Dave and the boys onstage, then vocalizing the riff and speaking of how bored Ray Davies’ vocal sounded? Moments like this are part of the magic of this series. So are the montages of one or the other of the interviewees slipping one punk classic or another on the turntable perched before them: Iggy Pop cues up the MC5’s immortal “Kick Out The Jams,” smiling fondly; Keith Morris lip syncs Brother Rob Tyner intoning “Right now…right now…it’s time to…KICK OUT THE JAMS, MOTHERFUCKERS!” Henry Rollins air drums as Dennis Thompson kicks in the beat; Iggy leans forward, head-bobbing; Syl Sylvain lifts his walking stick and plays air guitar to Kramer and Fred “Sonic” Smith’s molten riff. A quick cut to the incredible footage of the Five in full roar at Wayne State university in 1970.

“I love that!” enthuses Sylvain. “’Kick out the jams,muthafuckas!‘”

“What they did with music was a life-changer for me,” raves Sylvain.

This, in miniature, is the plotline of the entire series. It’s the inspirational quality at punk’s core, and at Punk‘s core. Each part – protopunk and early NYC punk in the first episode, England in the 2nd, US hardcore in the 3rd – is structured along these lines. Generally, one key member of each of the major bands is interviewed, though some of the interviewees are delightfully off-center: Damned singer Dave Vanian, for one, usually cedes the floor to the ever-manic motormouth Captain Sensible; not here. Original drummer Terry Chimes speaks for The Clash?! That never happens! Yet, here he is, and doing a damned fine job of representing Joe and Mick and Paul. On rare occasions, more than one band member appears, such as three of Black Flag’s singers – Morris, his replacement Ron Reyes, and most celebrated BF shouter Henry Rollins.

Inevitably, each punk wave rises and falls, recounted eloquently from that sofa by the parade of talking heads Who Were There as the archival footage rolls and records are spun. Then as one of the talking heads provides a coda, we cut to another jackplug inserted into another amp, and a key figure from next week’s episode appears on the sofa to provide a transition from this week to the next. Case in point: Syl Sylvain mourning the end of the New York Dolls the first week, and retelling the tale of how final Dolls manager Malcolm McLaren had promised him a plane ticket to London to come join the band who would become the Sex Pistols in late 1975.

There you have: The story of punk told as a relay race, with the conversational baton passed minute by minute, week by week. All atop a sofa.

Again, since punk is the Island Of Malcontents, no one will hardly be satisfied with this. There’s both broad strokes and thoroughness to the project, which reportedly goes all the way to the present, rather than dying with Sid plunging that knife into Nancy’s stomach as most of these histories typically use as a full-stop. It’s certainly a tale told with love and care, and a cinematic flair. And the ultimate lesson to be learned may have come in the 3rd episode, delivered by The Stimulators’/Cro Mags’ Harley Flanagan: “To me, punk rock was about being creative with very little, making something out of nothing, not giving a fuck about the rest of the world’s standards, simplicity and…freedom.”

This week’s soundtrack to this week’s column: Jungle Records’ new Down To Kill: Complete Live At The Speakeasy by Johnny Thunders & The Heartbreakers. The original 1984 album, edited down from two sets recorded 15th March, 1977, were the definitive live recording of the band who served as the bridge from The Yardbirds to 1st wave punk. This revision presents each set in full on one side of clear-with-red-splatters vinyl apiece. And it still sounds as perfectly sloppy and snotty as the Heartbreakers in all their raunchy prime could be. And no one could insult an audience with Johnny Thunders’ flair: “Can’t you fuckin’ kids dance? Yer borin’ da shit outta me!” Might be the definitive recording of this band, period. Still wrapped in Kris Needs’ beautifully atmospheric liners and Lee Black Childers’ and Erica Echenberg’s photographic reportage.