Home Music Bands Letter From America – our US correspondent on that Johnny Rotten v... 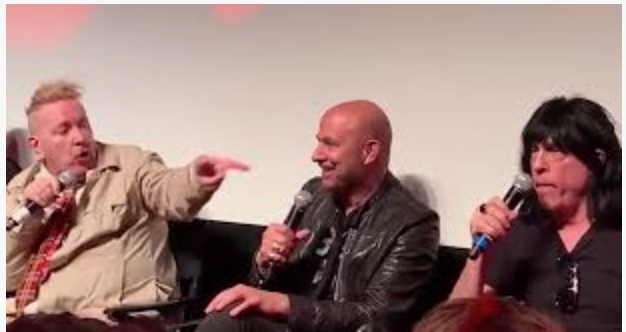 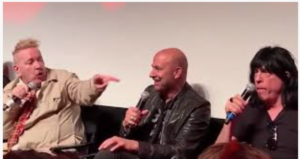 Dateline: Monday, Mar. 4th, 2019, Hollywood – “My heart is broken for him,” pleads a visibly shaken John Lydon. “He was a good friend of mine, alright?”

The scene: SIR Studios, long Hollywood’s first tier music rehearsal complex of choice. The Epix cable network is hosting an event celebrating the premiere of Punk, a multipart docuseries on the music and culture we all love so, produced by Iggy Pop and clothing designer John Varvatos. Lydon’s on his way inside for a preview of the show, followed by his participation in a panel/q-and-a featuring some of its’ interviewees. He’s just been ambushed by syndicated televisual gossips TMZ, asking about recently deceased Prodigy singer Keith Flint. In typically crass American gutter press fashion, the disembodied voice behind the camera asked if Johnny Rotten thought Flint was “one of the last great punk rockers.”

“…And don’t get it wrong,” Lydon rants on, as his manager/childhood friend Rambo tries to pull him away and lead him inside. But the UK’s First Great Face Of Punk has other ideas, likely fueled by the vast quantities of alcohol he’s obviously already consumed. He keeps leaning into TMZ’s camera, trying bravely to don his Johnny Rotten mask, even as he chokes back tears.

“But nobody loved him,” he wails, “and he was left alone, and he got destroyed.”

“Why?!” Lydon cries. “Why are so many people in this industry left alone?”

“Do you think drugs had something to do with it?” TMZ presses on. This is too much for Rambo: “Oh, my GAWD!”

Lydon, shaking his head, takes the question seriously. “Probably. But what you’ve gotta understand is we’re not looking after each other anymore, and we should. Everybody believes punk is….”

Rambo has lost patience with this American papparazzo. “Apparently, you’re not with us,” he warns darkly. “So you’re not supposed to be filming.”

“We’re supposed to go in,” steers the anonymous voice.

“And maybe you’ll get a real film!” smirks Rambo, clearly anticipating something.

TMZ thanks Lydon, who still has an agenda separate from his management’s. He pulls away from Rambo and follows the cameras, leaning in Johnny Rotten style again.

“C’mon, John,” Rambo groans one last time, before finally leading his friend/client away.

Lydon’s sorrow, combined with the state of inebriation which increased once he was inside SIR and watching the 45-minute highlights edit Epix prepared of Punk for the assembled, clearly affected what followed. It’s been widely reported as “Johnny Rotten vs. Marky Ramone” – two of the leading lights of ’70s punk, reigniting the geographical chicken-or-egg horseshit that’s plagued this scene since The Day. You’ve seen the highlights repeatedly by now: That was Johnny Rotten –  John Lydon’s Sex Pistols alter ego, punk’s enfant terrible – on the dais, talking over the assembled panel of experts, acting up, scrapping with the Ramones’ 2nd (and longest-lasting) drummer. The cartoon version reposted and reposted until you want to puke boils the contretemps down to Rotten again ranting about the Ramones having no impact on the Pistols, punk existing in Britain well before the celebrated Ramones/Flamin Groovies gig at the Roundhouse on American Independence Day 1976, and how Marky was not even an original Ramone.

“Don’t get me wrong, mate – I like the Ramones,” Rotten snarls memorably. “But I like Status Quo more!”

“Oh, I didn’t?!” barks Rotten, getting up and dancing. “Johnny Rotten didn’t walk the walk?!”

“You ripped off Richard Hell’s look,” mocks Marky, reviving another misnomer. “Sid Vicious was the star,” he adds, before sputtering, “If it weren’t for us, you’d be doing fish and chips or something.”

Jesus, Marky! Why don’t you just shake your cane and yell about how us Yanks saved his grandparents’ asses from Hitler in WWII?!

It was shameful and disgusting, two fucking geriatrics still insisting on seeing who can piss the farthest. L7’s Donita Sparks announced to the assembled this was punk at its messy, bratty best. Well, yes and no.

As usual, when the media get ahold of anything punk, sensationalism gets played up. Seeing the complete 25-minute video of what happened, presented at Rolling Stone‘s website, gives you a more complete picture. (And yes, I realize I just contradicted myself; but it is the only place I’ve seen the unedited video.) Rotten does dominate, because Rotten always appears when John Lydon is nervous or insecure. Lydon had already indicated his grief for Keith Flint; he later speaks of his wife Nora’s being in the middle stages of Alzheimer’s disease, and how painful this is. Add copious amounts of alcohol, and Rotten comes out, to cajole and act up.

But the other panellists did manage to get a word in, despite how this has been portrayed in the press. Black Flag’s most celebrated vocalist, Henry Rollins, and Guns N’ Roses’ Duff McKagan, once early-’80s Seattle’s best utility punk musician, both spoke of their lives being saved by witnessing The Clash on their 1979 US tour. (I can relate!) They also both told similar tales of having their heads cleanly sliced off by the Sex Pistols as kids. (Again – I know this dynamic well.) And all this, despite Rotten publicly introducing himself to Rollins onstage with backhanded admiration: “We’ve never met! You’ve said some excellent things! You’ve also said some deeply silly things!” When Rollins rejoins it’s because Rotten had turned his nose up at Black Flag in the press, Johnny yawns that Black Flag’s music was “boring.” Which makes me wonder what alternate universe Black Flag release Johnny heard….

Donita makes the most sense, setting both Johnny and Marky straight. (“Easy, tiger!” she grins at Rotten when he tries interrupting. “Let the old broad speak!”) When she speaks of being a late ’70s American teenager, energized by the Ramones’ chainsaw pop, then being scared by the Pistols’ assault – yet liking it? I get it. Both are important. They were gateway drugs to this life for many of us of a certain generation, alongside The Clash. You could easily have all three be your favourite band. There’s plenty of room on the bedroom wall for all three posters! For later generations, it’d be Green Day and Rancid. As Mick Jones once told me, “It does not matter when you get into this music. What matters is that you get into it.”

I’d have added “how” to Mick’s sage advice. Donita probably sums up The Punk Experience for many of us in the American hinterlands. I lived in a town that had no punk scene – I was Alice, Texas’ punk scene! To the point where, when not getting beaten up for being a “punk rock faggot,” I’d get asked who listened to these bands, besides me! (“Actually,” I’d tell them, “they press exactly one copy of each of these records, just for me. I am the sole means of support for this music, worldwide.”) And where I was, it was a marvel to see what seemed a million new bands forming weekly, releasing a million new 45s weekly, all great! At last, we had something exciting! Then you grow up and get out in the world, and you find out New York and London were battling it out for supremacy, for the patent on Who Invented Punk. Meantime, both towns are shitting on Los Angeles or Manchester or Sydney or Melbourne – any place other than the World’s Two Media Centers. But frequently, the best punk rock was coming from any of those other towns.

The truth is, punk wasn’t invented anyplace. Punk was the butterfly effect from The Stooges and New York Dolls flapping their wings earlier in the ’70s. Lydon likes to emphasize the differences between all the bands. But The Stooges and Dolls were the common ground. Every early punk band was usually composed of whatever given city’s misfits who owned Raw Power and New York Dolls, hated the dominant culture, and opted to start a band and play the music they wanted to hear. The Ramones, Sex Pistols, Radio Birdman, The Saints, and Frankenstein – later to rename themselves Dead Boys – all played their earliest gigs in roughly the same time frame, not aware nor caring that there were others around the globe doing something similar. In 1976, they became aware. Legs McNeil in NYC and Caroline Coon in London dubbed this new breed “punk rock,” after Lenny Kaye’s using the term on his Nuggets collection of ’60s garage bands.

And ever since all these players came onto the field, they’ve scrapped about authorship, when they’re all the waves resulting from The Stooges and Dolls flapping their wings. But hey, punk’s supposed to be iconoclastic, right? And once you’ve toppled all the statues, you turn on each other. You see it still on any given Facebook punk forum. Now it’s how no one’s as punk as the writer, neither this celebrated band nor that is punk, punk isn’t supposed to be political, Donald Trump is the most punk politician ever, and “I hate the Sex Pistols!” Or “I hate the Ramones!”

How can you be punk if you hate punk’s most definitive bands?

We eat our own, and haven’t stopped. But kids, autocannibalism is not nutritious. You’ll get rickets, and eventually disappear up your own back passage. And this goes for John Lydon and Marky Ramone both. My understanding was that punk was supposed to be Us vs. Them, not Us vs. Each Other. The pissing match has to stop. The Sex Pistols and Ramones won. You earned your respective places in the pantheon. Who pisses the farthest? Neither – you both hit the same mark. And neither of you invented this shit. Shut the fuck up!

This week’s column was soundtracked by Rocking The Memphis Underground 1978-1980, by Memphis’ foundational punk act, The KliTZ, on Mono-Tone Records. If you were ever curious about the ramshackle nature of Memphis punks like Tav Falco’s Panther Burns, The Oblivians, anyone on Goner Records, or The Reatards? Blame The KliTZ – they arrived at the sound first, equal parts Shaggs and Velvet Underground. These four ladies were mentored by Memphis rock ‘n’ roll’s dark twin magi Alex Chilton and Jim Dickinson. Both these guys liked their rock ‘n’ roll raw, untutored, and mistake-riddled. (“Mistakes are where you find the beauty,” Dickinson would grin.) Both gents encouraged The KliTZ to never progress far in their chops, to rip apart and reassemble Memphis’ rich roots music history with teenage gusto. As a result, it wasn’t just The KliTZ’ name which echoed London’s born-simultaneously Slits. 40 years later, all four original KliTZ played SXSW, looking like the grandmothers some of them now are, but sounding exactly like this record. Vintage shambolic anthems like “Hard Up” and “Two Chords” still hit spots no other music can.

Next time: That Epix Punk docuseries. Or maybe not?