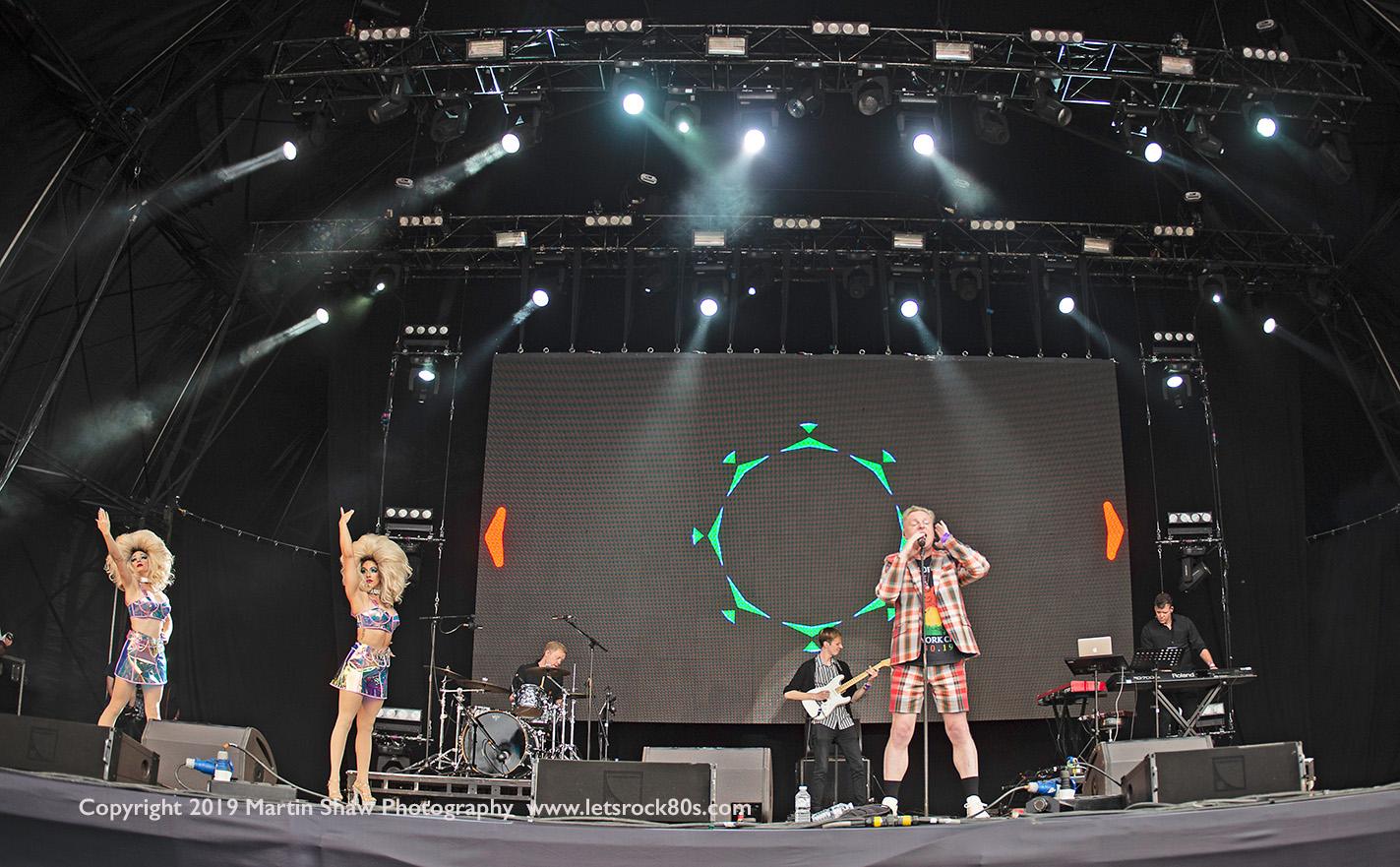 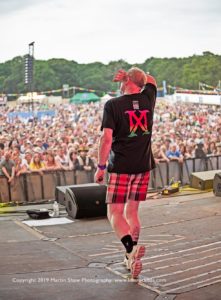 Review of the one day 80s Retro festival by second generation Louder Than War writer Lora Canty, with acts at Southampton including Marc Almond, Shalamar, Neville Staple and Andy Bell of Erasure….her father may chip in some unwanted info from time to time…

For anyone new to the idea of Let’s Rock, it is basically a one day festival devoted to 80s Pop Music (Dad was mumbling on about it not being all 80s Music because it didn’t include something called Bogshed) that plays with different bills all over the country. Let’s Rock Southampton has been going for a few years, we’ve seen the last two before today. 80s Pop Music was revolutionary at the time and feels that this specific style of music stayed with us, with such a range of ages of people enjoying it. However, to my Dad, it seems strange that I enjoy his generation’s music when he never liked his parents’ tunes himself, when he was young at least. But I think that the 80s was a big time of evolution in music with synthesisers coming in and that could be why it has stuck with us through right up to today. Because it sounded like the future when it first emerged, has it in some way stayed ahead of things?

Me and Dad wended our way to Southampton Common and positioned ourselves right at the front for the start. Let’s Rock commences with something called “The Retrobates Party” – basically this is a musical outfit backing a rolling cast of singers (they also provide musical accompaniment to everyone up to Neville Staple Band). Out of these perhaps only the remaining members of Musical Youth, given their decent chart career, could look rueful up the bill to the likes of Johnny Hates Jazz. Anyway this section of the show broke down to:

Owen Paul singing Don’t You Forget About Me (Simple Minds) and My Favourite Waste Of Time; then Jennie Belle Star with Sweet Dreams (Eurythmics) and Sign Of The Times; followed by Belouis Some who did Imagination and another song I didn’t catch the name of; Musical Youth doing a good version of Pass The Dutchie; and (Elizabeth) Westworld providing the finale for The Retrobates Party with Sonic Boom Boy.

Next came Toyah. These following acts were allotted 20-25 minutes each, so a mini set really. Toyah sang: Good Morning Universe (when it was just afternoon!), It’s A Mystery, Thunder In The Mountains, Echo Beach and I Want To Be Free…Not really knowing of her beforehand I actually really enjoyed Toyah and found that she brought a good vibe and energy to the festival.

Johnny Hates Jazz followed, they played their big hit Shattered Dreams, but didn’t really hold my attention. Limahl from Kajagoogoo (whatever that is!) then sang Too Shy, Steppin Out (Joe Jackson), Save A Prayer (Duran Duran), Life’s What You Make It (Talk Talk) and Never Ending Story – Although he may not have the best voice in the world (Dad coughs audibly in the background), I did find that Too Shy was very nice to listen to. 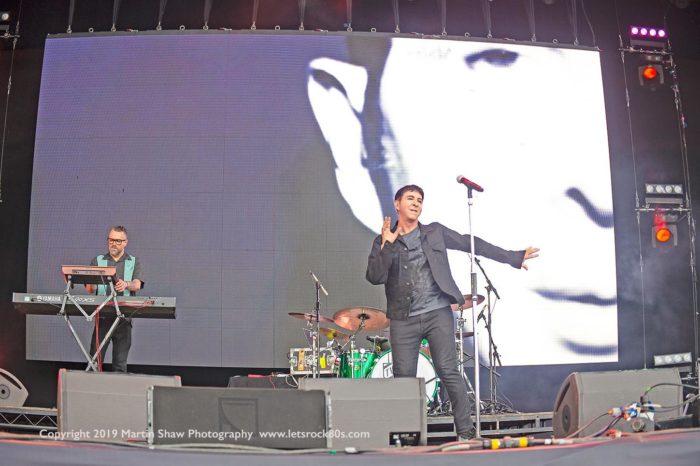 Arriving on stage next in a curious suit was Thomas Dolby, who sang the following – Europa And the Pirate Twins, Hyperactive, Heroes (with moving David Bowie Live Aid footage) and She Blinded Me With Science. To my shock, this might have been the most interesting act of the day. It sparked curiosity in me about electronic music in the 80s, which I will follow up. It seemed not too different from electronic pop music of today, but also had that unmistakable 80s style imbedded into it. A very enjoyable 25 minutes.

I had seen Belinda Carlisle a few years ago and she didn’t disappoint, singing among others Circle In the Sand, I Get Weak and Heaven Is A Place On Earth. I found Belinda Carlisle good fun to watch, especially hearing Heaven Is A Place On Earth. She perfomed very well despite some sound problems on stage. The sound was a bit in and out at times, but those are the breaks with outdoor music events I suppose.

From here on in all the singers had their own bands backing them. Let’s Rock (and 80s Pop too, to be honest) can be a bit cheesy at times, but it became mile-high gorgonzola for the tacky Black Lace singing along to a tape. Hmmm! Anyway on to better things.

The Neville Staple Band were first group in this part of the show, from now on there were short intervals between the acts while the bands set up, but not for too long. Let’s Rock is really well run in this aspect. Neville and band played Gangsters, Johnny Too Bad, Really Saying Something, A Message To You Rudy and the Skinhead Symphony. My Dad really enjoyed this band and he’s always singing A Message To You Rudy around the house. Personally, I thought that they weren’t bad, but not really my style.

Next came From The Jam and among their songs were That’s Entertainment, Town Called Malice, Down In The Tube Station At Midnight, David Watts, Strange Town, Going Underground, Start! and they finished with Eton Rifles. Again Dad was dancing around (well he calls it dancing!) and really enjoyed this band. I have to admit they were quite good, even though I don’t like much of the music he plays at home! Although Dad’s dancing did annoy me!

We had a bit of a sit down whilst Nik Kershaw played. He sang The Riddle, Don’t Let the Sun Go Down On Me, Wouldn’t It Be Good and The One And Only (he did write it!), while we tried to walk round the site (which wasn’t that easy). From here on in the sets were longer, leading up to the headline acts.

Soon Shalamar were ready to play, they really had good stage act and got everyone moving. They played Second Time Around, I Can Make You Feel Good, Night To Remember, Take That To The Bank and they were a great act to act to dance to! Shalamar provided good, catchy music for pretty much everyone to enjoy and they did.

Marc Almond was next and Dad told me his guitarist was from a band called Sigue Sigue Sputnik(?). Anyway, he played really well and provided a real personality to the show. He sang Tainted Love (Hoorah!)/Where Did Our Love Go, Bedsitter, Something’s Got A Hold Of My Heart, Torch, Say Hello Wave Goodbye…very good I thought. My favourite song was obviously Tainted Love! Absolutely great act, really enjoyable. We even sang Marc Happy Birthday at the end! 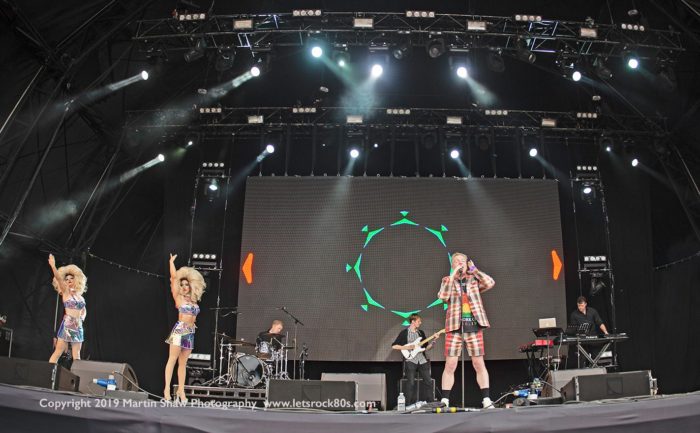 Erasure’s Andy Bell came on stage after a brief fracas in the front of the crowd – I’ve never seen anything like that at Let’s Rock before and it was thankfully sorted out quickly by the security people. A word for them – they have always been polite, cheerful and helpful in my view and did what can be a difficult job very well. Back to the music. Andy played Who Needs Love Like That, Ship Of Fools, Respect and Blue Savannah. (Dad’s comment: I enjoyed Andy Bell’s set far more than I thought I would. Those Erasure songs are really built to last and he’s an endearing presence on stage, great stuff) I actually found that Andy Bell did a very entertaining set with some great tunes, I liked it a lot.

We were both tiring a bit by the time Billy Ocean came on stage (well Dad is really old), but he played a real nice version of Love Really Hurts Without You, a good Motown-like song and covered Bob Marley’s No Woman No Cry….he was in good voice and the crowd seemed to really like him. We were tired at the end, but we saw them all! Billy brought Let’s Rock Southampton to a good close.

Whether you would enjoy Let’s Rock is really down to your own liking/toleration for 80s Pop in all its forms and tolerance of a few people being rather drunk and acting silly (but that isn’t the organisers’ fault – you would get far worse at other festivals I think). Overall it was a fun day with lots of good music and it is also reasonable value for money too. The fast turn over of the acts prevented you from getting bored and most of the bands and singers still had much to offer. The answer to why someone like me born in 2004 likes 80s Pop is simple – they just came up with some great tunes back then and still know how to perform them well in 2019.

All photographs courtesy of Martin Shaw of LetsRock80’s.com