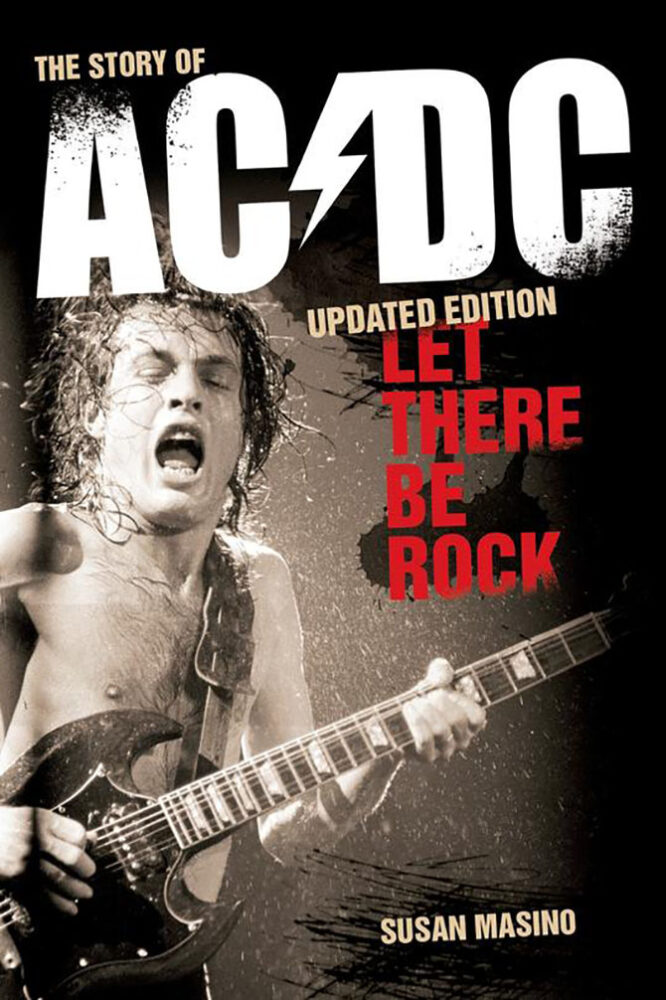 Let There Be Rock: The Story of AC/DC – Susan Masino

It’s unlikely that a more comprehensive document covering the life and times of the Aussie hard-rockers exists. If you are a fan of AC/DC, this one’s for you. Gordon Rutherford takes the Highway to Hell and reviews for Louder Than War.

What is the role of the biographer? Is it merely a responsibility for writing about the subject’s life as accurately as possible? If so, then The Story of AC/DC: Let There Be Rock by Susan Masino undoubtedly ticks all of the boxes. Beyond that, does the biographer have a duty to entertain and engage? I would argue that they do, just as much as the writer of fiction. Alas, and I say this with the proviso that I am not massively into AC/DC, I’m not convinced that this is a particularly compelling story.

Susan Masino first bumped into AC/DC in 1977. It was the day that Elvis Presley died and Masino was a cub reporter looking for a break. Her editor sent her down to a local rock club in her native Madison, Wisconsin to run errands for the band playing there that night. Serendipitously, the band putting in the hard yards, gigging endlessly as they strived to make a name for themselves, were AC/DC.

Masino maintained contact with the band over the following forty-odd years, always getting the opportunity to spend time with them when they were in town. Their relationship continued well after the band had exploded into the stratosphere of mega-stardom and it says a lot for the band members that, despite their celebrity, they still took the time to chew the fat with the fans like Susan who had helped them get to the top.

The level of detail in the book is staggering. Every album, every tour is meticulously covered. Masino’s access to the inner circle has undoubtedly helped her to mine a rich seam of stories. Augmenting this is her own punctilious desk research, which is impressive in its depth. For example, at one point, when the band are trying to break the UK, she lifts a quote from a review in the East Kilbride News. Now, dear reader, you will probably have never heard of that particular publication and it’s likely that you never will again. But, as it was the local paper of the icy cold, parochially-minded, roundabout-infested new town that I grew up in, I have. This emphasises just how painstakingly scrupulous Masino has been in her research.

The other thing that is incredibly impressionable when reading the book is Masino’s love for this band. It goes way beyond casual fandom, but it never comes across as over-sickly or nauseating. In fact, I found that it vindicated the writing and it enabled me to feel a warmth toward the writer. The only drawback with such unconditional love, of course, is that you sometimes fail to see the flaws that flaunt themselves right in front of your very eyes.

Let’s begin with the album and song titles, shall we? I mean, Ballbreaker? The Jack (about venereal disease)? How about Big Balls or Let Me Put My Love Into You? Then we come to the issue of the lead guitarist who dresses like a schoolboy and insists on revealing his arse (and a full frontal on one occasion) as part of every show. And then we have, predominant in the early chapters, the tales of all kinds of debauchery. These typically feature lead vocalist, Bon Scott. At one point Masino exalts the fact that Scott once managed a ‘trifecta’, helpfully explained as bedding three women a day for four consecutive days. There’s a lot of that in the early part of this book.

Masino refers to Southampton University’s decision to ban the band from playing a gig there in 1976 due to “blatant vulgar and cheap references to both sexes”. In her following sentence she asks “and that’s a bad thing?” Well, yes Susan. Even in 1976 it’s a bad thing.

Now, I’m no prude. Nor would I claim to be the most woke guy in the room, but all of this leaves me a little bit cold. It’s passed off as ‘hey, it’s only rock n’ roll’. And that’s fine. Just don’t be surprised when some people feel repelled by it. Moreover, what I found most surprising is that an obviously intelligent writer like Susan Masino, who no doubt had to fight blatant sexism in the early part of her career, would not call this out. Love is blind, I guess.

More positively, one of the most gripping sections of the book comes when Masino covers the tragic death of Bon Scott. The singer was notorious as a hard drinking, old school rock and roller. Ultimately, he met his end in the way that so many of that ilk do, dying after being left to sleep it off in an acquaintance’s car after a night of heavy drinking. Masino covers the death of the singer with compassion and love. However, for me, she misses an opportunity in calling out the band’s record company, Atlantic, who put out a press release saying “Bon probably went out the way that he would have chosen”. What, in a car covered in his own vomit? I doubt it. And given the travails of Malcolm Young, which Masino covers with great sensitivity in subsequent chapters, I’m surprised this is permitted to go without comment.

Speaking of Malcolm, the penultimate chapter when Masino covers the sad death of AC/DC’s founder and driving force is also beautifully composed. Her description of Malcolm Young’s funeral and the symbolism of his beloved white Gretsch, The Beast, is very moving. It is evident that she is not writing about the death of a rock star here, she is writing about the loss of a dear friend.

Let’s return to where we began when considering the role of the biographer. It’s obvious that Masino has accurately documented events. It’s doubtful that a more accurate listing exists. However, Masino slightly falls down when it comes to making the story interesting to the casual observer. It’s just a little bit too linear, as it moves step-by-step through album-tour-album-tour. It’s written by a fan (and a massive one at that) for the fans and whilst it may not enthral spontaneous browsers, I honestly believe that people who are into AC/DC will love this.

Of course, one could argue that I found it less compelling because I’m just not that into the band. But in countering that I offer up Phillip Norman’s Shout and Tommy Lee’s The Dirt: Confessions of the World’s Most Notorious Rock Band (yes, I know I still have your copy, Chris Brookmyre). I abhor Motley Crue and Lee’s book is another Spinal Tap-like tale of excess, but it’s also very funny and tells the story with lashings of personality. Both books mentioned will grip you every step of the way, whether you are a lover of the band or not. And, ultimately, that should be the benchmark.

So, in concluding, The Story of AC/DC: Let There Be Rock is definitely one for the fans. Fortunately for Masino and her publishers, there are millions of them.