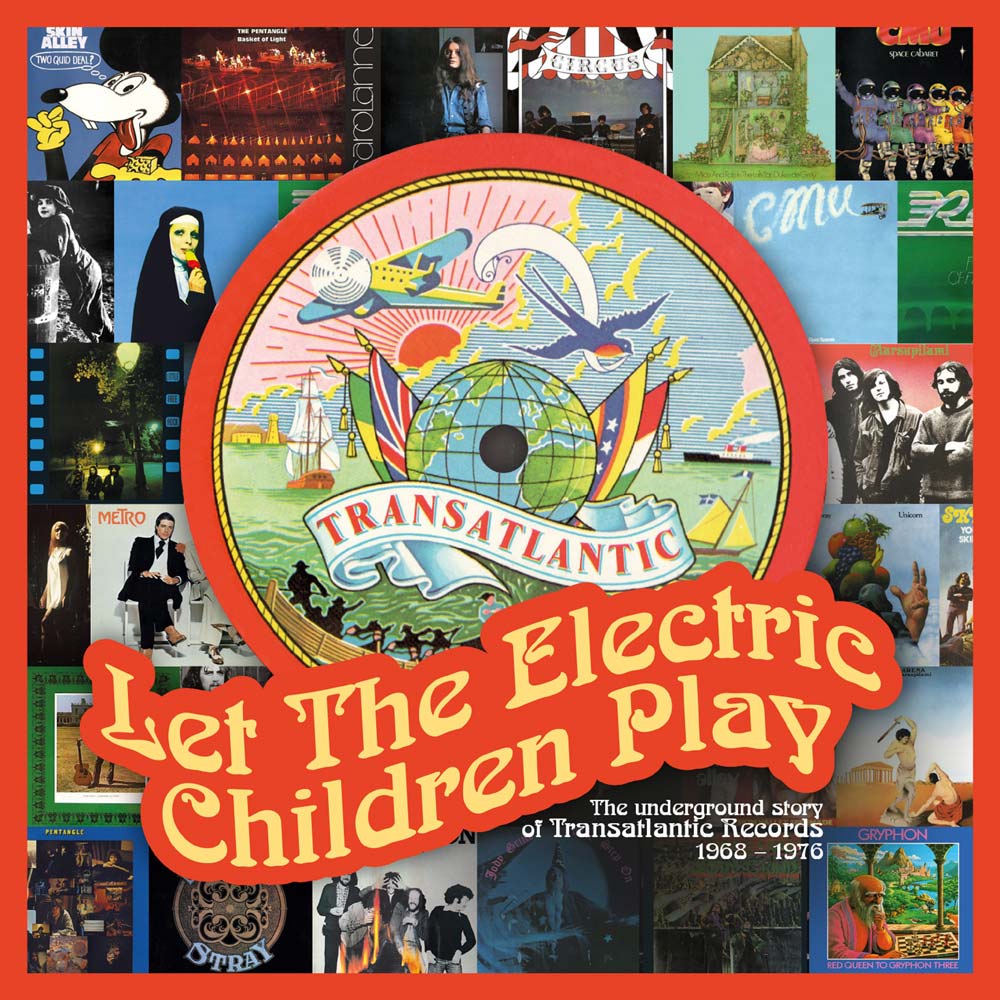 Sub-titled “The Underground Story Of Transatlantic Records 1968-1976”, this new box set features contributions from usual suspects like the Deviants, Skin Alley and Stray to less likely purveyors of the counterculture such as Pentangle, Mike and Sally Oldfield and even Billy Connolly……Ian Canty looks back at one of the UK’s pioneering independent labels’ elongated Summer Of Love…………

Transatlantic Records were launched way back before Beatlemania in 1961 by 20-something Brummie Jazz fan Nat Joseph. After a visit stateside he inaugurated the label by securing the rights for UK issue of classic Jazz LPs from the back catalogues of the Prestige and Riverside imprints. Always wanting to broaden the appeal, Transatlantic soon branched out into Folk, signing scene leaders the Dubliners and John Redbourne among others. Classical music also came under their auspices, but ironically the label enjoyed its greatest success with three big selling sex education LPs! Though mostly giving Beat and Pop a wide berth, the emergence of Psychedelia and “the underground” granted Jospeh and his label an entry into the Rock arena.

First, he had a near hit with the Purple Gang’s Granny Takes A Trip (banned by the Beeb) and issued hip recordings by experimentalist Ron Geesin. Then he sought to licence the US versions of Psychedelia with TA issuing the key platters from the key players like the Fugs and Frank Zappa’s Mothers Of Invention. By 1969 Transatlantic had a roster of underground rockers that read like a “Fantasy Football” who’s who of the scene, with the Deviants, Stray and Little Free Rock in their number. Also netting the cream of what Folk had to offer in the first “supergroup” of that genre in Pentangle, the label was pleasingly diverse and unpredictable. I suppose if an equivalent can be made, the “ultimate weirdo” ESP label in the US is the nearest I would have thought.

Transatlantic was one of the pre-eminent indie labels during the timescale presented here and possibly the key outlet for underground sound. This collection surveys that era which ended in 1975 when Joseph sold a majority share to Granada. Two years later Granada Group sold their share to Marshall Cavendish and Transatlantic was consigned to history, though rising phoenix-like was Logo Records (later home to the Tourists).

This new boxset is clearly a labour of love, in a handsome clamshell box and replete with detailed sleevenotes and band biographies. It’s beautifully presented and before you’ve listened to a note you can be sure you are in good hands. This is a delightful trip back in time that takes in nearly a decade of sounds with some genuine rarities, having the three discs move in chronological order from 69 to the mid 70s. Here’s a whistle-stop tour….

To begin with, certainly, anyone who only knows Alan Hull through Gazza’s lamentable take of the Lindesfarne classic Fog On The Tyne is in for an enlightening time. He kicks things off in fine style with the superb free-wheeling anti-establishment We Can Swing Together and returns with the feelgood-song-about-death Obidiah’s Grave. Of course, the star-studded Pentangle were for a long time Transatlantic’s big guns – Light Flight charted and provided the theme for BBC2’s first colour drama, the “Swinging London” classic Take Three Girls. It’s fun to hear its flowing Folk Prog juxtaposed with the Deviants’ Proto-Punk Billy The Monster. Circus feed Norwegian Wood through their patented Jazzy Hard Rock mincer and if Mike and Sally Oldfield were some distance from Moonlight Shadow on their offering here as the Sallyangie, their Midsummer’s Night Happening is an Acid Folk gem.

Litle Free Rock’s version of the Creation’s Makin’ Time keeps the edge of the original but stretches out in classic riffing Rock style. The Humblebums, a duo of Billy Connolly and Pop maven Gerry Rafferty, offer up the Space Folk of Saturday Roundabout Sunday. It’s good, but their best work was ahead of them. Joy Grind are a bit of a discovery for me here, never heard of them before. They were the brainchild of ex-Bow Street Runner (the band that is) Tim Hinkley. The best of their selections is a track from second LP Far Canal (the scamps!) entitled Plastic Shit, which is a classy bit of heavy underground rabble-rousing bringing to mind a more Blues-minded version of Jesse Hector’s Crushed Butler. Heavy man, in both senses……

As we move onto 1970/1 with disc two the jamming kicks in, with Belgium’s contribution to the Prog craze Marsuilami serving up two portions of Jazzy Prog Pop madness in Born To Be Free and Prelude To The Arena, the former sounding a little Doors-like. I’ll restrain myself from the obvious “fantastic” pun but Mr Fox’s Mendle is a stunning piece of Folk-tinged Prog strangeness, cool female vocals, church organ and thrashing guitar all seemingly timeless and fresh. Jan Dukes De Grey, a spin-off from the wonderfully monikered Soul Busters Summers’ Express, offer up the playful Folk Horror of Mice And Rats In The Loft and Skin Alley could have pre-empted St Etienne by decades on the curiously TV Theme-sounding Skin Valley Serenade.

By the time we reach CD 3 and 1972 the Underground was fragmented with Glam and Prog Rock now ruling the roost. We get examples of each with Stray’s Son Of A Father having a little bit of Glitter in there with a subdued Stooges-like kick to the guitar. Later they Rock up Cliff’s Move It in more typical early 70s style. Gerry Rafferty, now solo after parting ways with Connolly, offers the fine but sadly prophetic Don’t Count Me Out, further evidence if any is needed of the man’s mastery of Pop/Rock.

There’s also the inscrutable whimsy of Gryphon’s Opening Move which darts about all over the shop and the vocalist of Mr Fox Carolanne Pegg provides some more freaky and original Folk Rock on the charming Fair Fortune’s Star. If you think the dancefloor is given a miss Pete Bardens’ fazed Psych Funk classic Tear Down The Wall will have you cutting a Hippy rug and to calm down what could be better than the pure Sci Fi Chill of CMU’s A Distant Thought, A Point Of Light? With the Underground a distant memory Let The Electric Children Play ends fittingly with Metro’s proto-New Wave Criminal World.

Simply put, Let The Electric Children Play is a delightful romp through Transatlantic’s back pages. Nat Jospeh cast his net wide and gathered up all sorts of interesting fish and Esoteric have pulled all this together to presented a wonderfully varied and beautifully presented compilation that makes for enthralling listening.