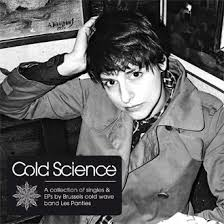 Singles anthology of Brussels New Wave four piece Les Panties…….LTW’s resident fuddy-duddy Ian Canty finally takes off his cardigan and slippers and wakes up to the sound of 2016

Post Punk never existed! Well, not in the way that it has become a commodity in the last ten years anyway, a mere off-the-peg musical trope. Just pressed into service as a badge of credibility used mostly for cynical reasons. It was different originally. Punk was pronounced “dead” by 1978 and the bands that were left (and the ones in the process of forming) could go one of two ways – they could either stay within the boundaries that were were already set or move away from the standard Punk style into something that took that as the starting point and blasted off into the future. I was “around” at the time and I can’t remember Post Punk being regarded as a “genre” at all, there were too many different directions being pursued for anyone to have much common ground. Despite this, for most of the fans no barriers were drawn – didn’t matter to me what tag the music press stamped on a record, it was the sound on it that mattered. “Post Punk” could easily be applied to Bucks Fizz when you think about it, after all they started after Punk, which is what “post” really means in the way it was first used.

As I implied previously a certain number of modern outfits appropriated some of the sonic trademarks of PIL, Joy Division and Gang Of Four and made cash from that sort of chaos. Lets not forget, a copy is a copy even though it might be a facsimile of something “cool”. For me this seldom worked and always seemed more than a little fake – you can’t really “turn back time” in the comfort of the 21st century to something that was so intensely felt and bitterly fought over. Cherry picking the best bits for the financial gain that pop hits provides is almost insulting. Not all of the bands that picked up on that style were like that, but the decent ones were few and far between.

Niftily ducking the Post Punk tag by terming themselves New Wave, somehow Les Panties, despite having a name more suited to some sort of Splodgenessabounds spin-off, can’t be confused with any of the Post Punk chancers we’ve been subjected to in the past decade. What they do just seems natural and not adopted for fashion or profit. To me it appears they arrived at the way they sound in an unforced way, yes there are influences, but those are only part of the story not all of it. At times they remind me a little of French Electro Punk legends Kas Product, but not enough to for them to be regarded as copyists in any way. Even that is only a fleeting resemblance though and they veer down many other different avenues too, making them agreeably hard to pin down. You don’t spend all your time whilst listening thinking of other bands who might have done things the same way but better long ago and that is the mark of something a bit tasty.

This is a compilation of singles tracks recorded over the past two years and it is glorious. A temptation for a lot of people with Les Panties would be to put all the focus on singer Sophie Frisson and yes she is beguiling, switching from sounding a bit drunk to an icy off-key blast, to a warm shot of pure vocal beauty all over the course of a single song. But the music itself provided by Hugo Fernandez, Paul Normann and Sebastian Decupere is perfectly constructed too, electronic for the most part but no mere robot noise, emotional and soaring or tough and relentless as each song requires.

Looking at the songs themselves in more depth, “Velvet” is gorgeous, a pounding bass forcing on the synths with even a little Sundays/Smiths influence in there, but much, much harder. At times they do bear somewhat of a likeness to German 80s band Propaganda, on “L’Arrivee” and “Factory”, well a Propaganda is they had been allowed to play their songs without some producer overloading their records with unnecessary and now very dated sounding gimmicks. But overall with Frisson’s “torch singer” touch on “Diving” and the layer upon layer of musical grandeur that features on “White Tiger” and “Porkshop”, Les Panties stamp their own mark indelibly while touring some well-worn sonic thoroughfares. They really are very special indeed and tickled even this jaded soul.