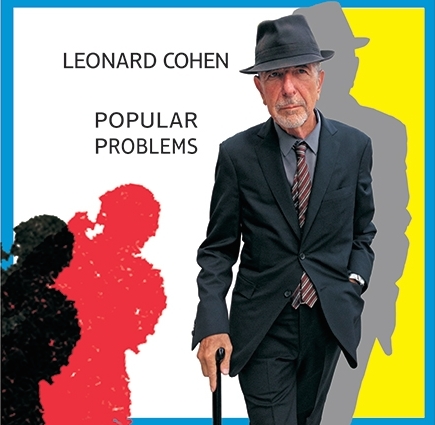 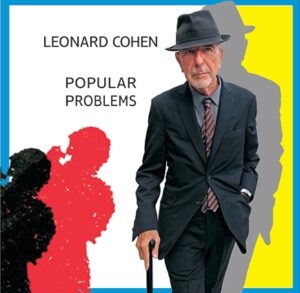 Once upon a time we thought there wouldn’t be any more Leonard Cohen albums. He’d gone off to live out his declining years in a monastery on top of a mountain, partly we thought to be closer to God, but mostly because God had expressed an interest in being closer to Leonard Cohen. Back then if you told people you were a Cohen fan they’d shake their heads at you and mutter something about bedsits and “music to cut your wrists by” and it didn’t matter that you pointed out to them with the passion of a zealot how sublime his songs were and how funny, they still looked at you a bit sideways and hid the knives when you visited.

And then suddenly he was back and he was cool again, with new music and a spring in his step, and a couple of years later there was more music and a whirlwind touring schedule to boot, fuelled by a financial crisis brought on by his manager embezzling all his savings, and all those of us who had spent years decrying the cynical money grubbing ways of a music industry that valued profits way above talent and integrity went on marches and distributed pamphlets to complain about the way in which our hero was peddling himself around the world for baubles and lucre.

Except of course we didn’t. We said “Wow, we’ve got Leonard Cohen back” and we didn’t begrudge him a penny because he’s Leonard Cohen and he can do no wrong and because if he ever did sell himself out, he’d do it with integrity, a bitter pun and a wry smile. Somehow all he does is show us how fatuous our protestations about artists who sell out have been all along, because he’s a lot smarter than us.

By and large the post monastery albums have been pretty good and among the good and sometimes very good songs there have been moments of genius too – songs as close to perfection as the classics, in some cases closer, songs no-one else could have written. Alexandra Leaving from Ten New Songs, Golden Gate and Half The Perfect World on from Anjani Thomas’s Blue Alert album, the uneasy sexuality of Because Of on Dear Heather. These songs and a handful of others served to confirm that Cohen was still capable of producing works that no other songwriter of the modern era would even think of writing.

Cohen’s new album Popular Problems is produced by Patrick Leonard who also shares song writing duties (as he did on 2012s Old Ideas) and while it’s anybody’s guess who wrote what it seems likely that Leonard, who has worked with the likes of Elton John and Madonna, is at least responsible for the musical diversity of an album that incorporates elements of world music, blues, jazz, gospel and country in the mix, ditching that eighties synth sound that has stuck around too long on Cohen’s recorded output (although mercifully the infection never spread to the live shows).

The man himself seems to be in pretty good form, both vocally (this is one of his best sung albums in years with the backing singers playing a far less prominent role) and lyrically, sparring confidingly with those two old adversaries sex and death, setting out pretty clearly that the latter will have to bide it’s time a while, while the former is on notice that, despite the somewhat weary tone of some of his previous albums, he has no intention saying farewell anytime soon.

Album opener Slow sets out the present position succinctly in the style of a John Lee Hooker blues with the singer making it clear that any perceived lack of alacrity on his part is the result of lifelong personal preference not of the onset of old age or infirmity. Of course it needn’t be about sex, there’s no smut or anything, but lyrics like “Let me catch my breath / I thought we had all night” make the context pretty clear. Just past his eightieth birthday Cohen is still on Boogie Street.

There’s plenty of ironic humour in evidence. Almost Like The Blues is a cheerfully apocalyptic, much in the vein of the title track from 1992s The Future, with plenty of quasi religious overtones and a throwaway comment on how unboring the stories about Jews and Gypsies are that only Cohen could get away with without bringing howls of protest. My Oh My is the kind of effortless riff that one imagines he could knock of at will but it’s a nice little 16 bar blues that gives him the chance to show that he’s still got some vocal tricks left and it will probably become a live favourite.

Are there any stone cold classics, any Alexandra Leaving moments as they’re called in our house? Well, there are some contenders.

Cohen fans have been familiar with A Street for several years in various forms. Written in the aftermath of 9/11 it finds the narrator in a mood of cool introspection, delivering a wry meditation on relationships disrupted by circumstance in which friends and fellow smokers depart in uniform, leaving the dishes and a baby in the bath but ultimately the mood is positive – there is yet hope amidst the desolation.

“The party’s over,
But I’ve landed on my feet,
I’ll be standing on this corner,
Where there used to be a street”

Born In Chains is a song that Cohen has spent forty years writing and rewriting. He’s never been one to shy away from incorporating religious texts into his poetry, but this is one of his most sustained and heartfelt forays into biblical allusion, drawing on the exodus from Egypt to convey the journey of a human spirit from bondage to liberation. It’s a song that feels weighty and serious and a couple of hundred more plays will tell me just how good it is.

Popular Problems is an album where the sacred and the profane, light and dark, are balanced pretty evenly, but album closer You Got Me Singing tips the balance squarely in favour of the light while paying its breezy respects to Cohen’s best known song.

Hard core fans are uneasy about Hallelujah. We used to like it when it was just a fairly minor album track. It had some good jokes and a central rhyme that nobody could ever take seriously. We forgave it for the god awful whining of Jeff Buckley, even for the sinus voiced manglings of Rufus Wainwright. It wasn’t fair to hate the song, that would be victim blaming and we’re too smart for that. It’s not the song’s fault, it’s just that it has a chord progression and a spurious gravitas that makes it ideal for singers who think that squeezing their eyes tight shut and shouting is only one step removed from profundity.

But a million wounds inflicted by talent show hopefuls have left the song a wreck of its former self. It was never one of Cohen’s greatest works, not even one of the best on Various Positions, a cruelly underrated album. It was okay but now its dead and should be left in peace. At concerts we shuffle uncomfortably in our seats when it arrives and applaud only half-heartedly. We applaud twice as hard for Famous Blue Raincoat by way of compensation.

Cohen himself has said in interviews that he regards it as one of his finest efforts. I hope he’s joking. Anyway in this final song he’s feeling good and singing and what should come bubbling to the surface but our old favourite –

At least he won’t shut his eyes and gurn like he’s severely constipated while he’s doing it.