Actor, producer, singer, songwriter, Leon along with his band The Peoples unleashed a soulful, heartfelt single, entitled Beautiful, on October 6th, via The Spectra Music Group. Beautiful is a sexy R&B/Reggae-pop flavoured mix, glazed with integrity and seasoned with an authentic sincerity that detonates a powerful and compelling message. 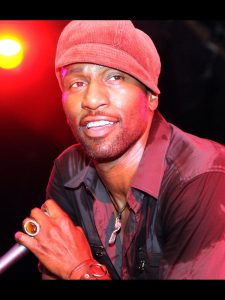 While listening to Leon’s music you might suddenly have a revelation and realize his face as a familiar extension of the entertainment industry. Known for portraying David Ruffin in the hit mini-series, The Temptations, and for the film, The Five Heartbeats. He played the lead role in the NBC television film Little Richard as well. His credits also include the films, Waiting to Exhale, Cliffhanger, Cool Runnings, Get Rich or Die Tryin’, as well as appearing on the hit television show OZ. Aside from that he can be seen in Madonna’s music video Like A Prayer.

I was honoured to speak with Leon, while he gazed out on the clay tennis courts, overlooking the Hudson River. He referenced his musical inspirations, his new single and his up and coming album, as well as talking about his acting career, and new production company.

Louder than War: That new single of yours, Beautiful, is hot! Very sexy, with a great message.

It has a really cool message, did you write the song?

What were you thinking as you wrote it?

I have a writing partner Joel (JK) Kittens, the same one from Herbie Handcock’s Soul to Soul. He’s really one of my best friends in the world. When I get together, mainly I create a concept. One of the things that I wanted to talk about in this whole album, which is called, Love is a Beautiful Thing, is all different versions of love.  Not just the kind of love when you sleep on the same pillow for years, and the next thing you know because you’re not sleeping with them, you don’t know where the hell they are. That’s not love. I’m talking about the love for your brother, sister, your friend…you know you may hate them one day, but you’ll always love them.

I got that from the song, a family, unity kind of love.

That particular song Beautiful, it’s just about what it says, it’s about enjoying the people in your life because they’re beautiful, uplifting.  Letting you know you feel about them, and not be afraid to do it.

And what better message is that especially in the times we live in.

You just finished what I was going to say. Especially in the times we are living in. Especially even more so with women. I think women forever have been put in this very difficult place. Trying to be women, trying to look good, and even sexy, and to be taken seriously as a person, as a partner, and as a business woman…I think now more than ever, we are at that place because of the current administration, that women are really standing up for themselves. I think there is no better time to let a woman know while she’s in that struggle that she’s beautiful. Whether it be a mom, a sister, or even my daughter. I just wanted to write a song that told that kind of message.

The message is so spot on. So, you said the album is going to come out next year?

Yes, the album is going to come out next year, with The Spectra Music Group.

So if you could have your ultimate stage fantasy, what would you need to happen?

Wow….I guess just off the top of my head, it would just be having a crowd of 30 to 50 thousand people, singing my song back to me. For me as a songwriter, and also because it’s not my first profession, I value it so much. I do it for the love. I want to do it, I don’t have to do it. For me, I really appreciate that. I remember the first time I heard my song on the radio. I was like, “Oh wow, someone is listening to my record besides me?” It’s a great feeling. When you have a song, for example you were telling me when you talked about my song as getting my message. It gives me a warm feeling inside just because I don’t know if people are going to get what I’m putting across. You never know that. People may not get it so when you hear someone that gets it, it’s a great feeling.

Well it’s a beautiful song, and I do get it. You have accomplished so many things in your career, you’re an actor starring in major roles, a songwriter, a singer, a father, is there anything that you still wish to do?

In my individual profession there’s still so much I wish to accomplish. I don’t care how many movies I’ve made, I’m just starting. There are so many people I haven’t worked with, so many stories I haven’t told. There is so much to do. I feel like I’m always just starting, and I’m happy and excited. Music to me is even more exciting. The one thing I tell people all the time who ask me which I like more, singing or acting, I don’t like either one of them more, they are just different. I’m a trained actor, and my job is to play a character that someone wrote. But when I’m on stage, it’s me.

But the fact that you have portrayed a lot of roles where you got to sing as well is pretty cool.

I think that for whatever reason I gravitated to these roles, and that was great. I was happy, I love those kind of movies. Elvis was a big influence on me when I was growing up. That sort of guy was great looking, he got to sing in the movies, he always got the best looking girls. I thought, “Ok, that’s a pretty good profession”.

Will you be touring in support of the album, the single?

Without a doubt. I definitely will be touring in support of the album this spring, summer and probably until the fall. With the single I’m just doing five dates right now. We will be in the Jamaica Performing Arts Center in New York,  in Phoenix in November, and then just mainly gearing up to go around the country and play our music. One of the things that is really interesting for me, is I go places and play music. People may not know the band right off the bat but then after a while I see them looking at me, and then all of a sudden they are like, “Oh, you know who that is?” I look at their faces, you can’t miss it. When I’m playing sometimes I go out, and we always rock the crowd, but I see at first sometimes some people are completely delighted. Half the crowd already knew, but some people, they have that look on their face, like “Wait a second”. I often put my music on playlists or play it at parties, and never, ever tell them that it’s my band. I want to see their reaction on their own. I don’t want them to react because I’m there.

How do you feel when someone says, I don’t like it, it’s not my type of music? Do you hate them for the rest of your life?

There is always going to be someone that doesn’t like that type of music. If it is their type of music and they just don’t like it, that’s different. I’d much rather have them not like the type of music then just not like it.

Do you recall your proudest moment either as a musician or as an actor? A moment in your career that you will never forget?

Wow…I should have this…Really there has been a few moments for me like that. Usually they are involved with some kind of legend. Someone that I’ve looked up to since I was a kid, them knowing me or wanting to have a conversation with me. I’ve pinched myself because I’m in a corner talking with that person. I’ve had that, talking with Smoky Robinson, or James Taylor. To me they are the epitome of songwriting. To me it’s like, “Really, am I really having this conversation. Is he really this interested in me”? It’s fantastic, it’s someone you look up to, they are at another level, a level that you don’t even aspire to be.

I know that the album hasn’t even come out yet, but do you have a next project in mind?

Yeah, I’ve already started writing ideas for the songs. It’s tough though, between that and acting, and I have a production company called, “Motion Mob Films” in New York. We’re developing projects right now. We have one in pre-production and one in post-production so I’ve kind of been doing that, supervising that as well. There’s a lot to juggle. I’m also a very proud daddy. In the midst of all of that, I get to play some tennis, do some fun things…it’s all good.

Everyone said that you were really cool, glad you are…

I can’t say that I paid the people to say that.

What about everyday life influences your song writing?

Wow! Everything. I’m an observer of people. Especially relationships. A lot of my songs are about relationships. Not only romantic ones, but relationships in general. That’s what shapes our lives. There were so many things that affect it. I watch people’s behaviour, it kind of shapes the stories I tell. They are just ideas about life, most of the things that I write about have happened to me in my life, or that I’ve experienced through others.

Yay! Is there anything else that you wish to talk about that I didn’t cover?

I’m on the road doing a play called, “Before I Say I Do”. It’s a play about some couples that are about to get married. They decide to go to this woman who was supposed to make their marriage stronger. What it really is, is a Boot Camp, where they get locked up and have to follow all of her instructions. It puts them through these tasks about learning about themselves, about their maturity. The next thing you know some will come out strong enough to enter into marriage and some of them come out realizing that they were about to do the wrong thing.

There’s a lot of comedy. If someone wanted to see it they could probably go to my website justleon.com and the dates will be up there. We’re in Columbia North Carolina, Charlotte North Carolina, Raleigh North Carolina and Virginia next weekend.