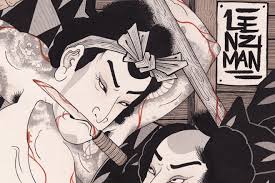 Back on Metalheadz for his first new material since his debut album, Lenzman delivers a six-track EP of heartfelt drum ‘n’ bass. Simon Tucker reviews:

First things first, if you are going into the Golden Age EP with any preconceived idea then please reverse back up and check those ideas at the door. Golden Age is not a straightforward dance record. The elements are all there of course. Your skittering, syncopated drums are present and correct. Synths and sub trip and stab as you would expect but there is one vital ingredient to this EP which elevates it beyond genre typecasting. That ingredient? Soul..

Golden Age is crammed pack with (heart and) soul making it a romantic listen that crams into its running time the pure DNA of the “classic” era of seventies soul and brings it up to date. No retro trickery or l-a-z-y flourishes are used just to get THAT feeling, instead we get timbre and single malt that seeps through the speakers and swirls down the larynx.

Got My Mind Up eases us in with a pulse-drum skip and thrust before a piano starts the tug at the heartstrings. A liquid roller than occasionally bites, Got My Mind Up is a track that reaches out to the inner depths of your buried heart and drags it up through the tear ducts.

The title track follows and we are introduced to another slice of skittering soul but with added Steo. It’s hard to know what actually happens in the studio but whichever track Steo’s vocals appear on they always seemed to touch the stars. Whichever way it happens (if Steo brings out the best in the producers, or if the producers bring out the best in Steo) you can always count on the fact that when Steo lays down a vocal you could bring the burliest of males to tears…and get them to thank you for it.

Never Enough (featuring Forren) and Homie Don’t Play That keep the overall fluidity of the EP flowing but like most beautiful rivers, the sun may shine and shimmy on top but there is a darkness underneath.

On the digital version of the EP we are treated to two bonus exclusives with Cherry Blossom a more standard roller but still full of atmosphere and a full vocal mix of Golden Age which adds extra rhymes by Dan Stezo and whilst this would probably play bigger in clubs it doesn’t have quite the same magic as the original.

Golden Age is a slice of romantic life. A piano lays at its very core and the choice of this instrument is pivotal in its impact. If you want your electronica full of maturity and well crafted song-craft then this is the release for you.