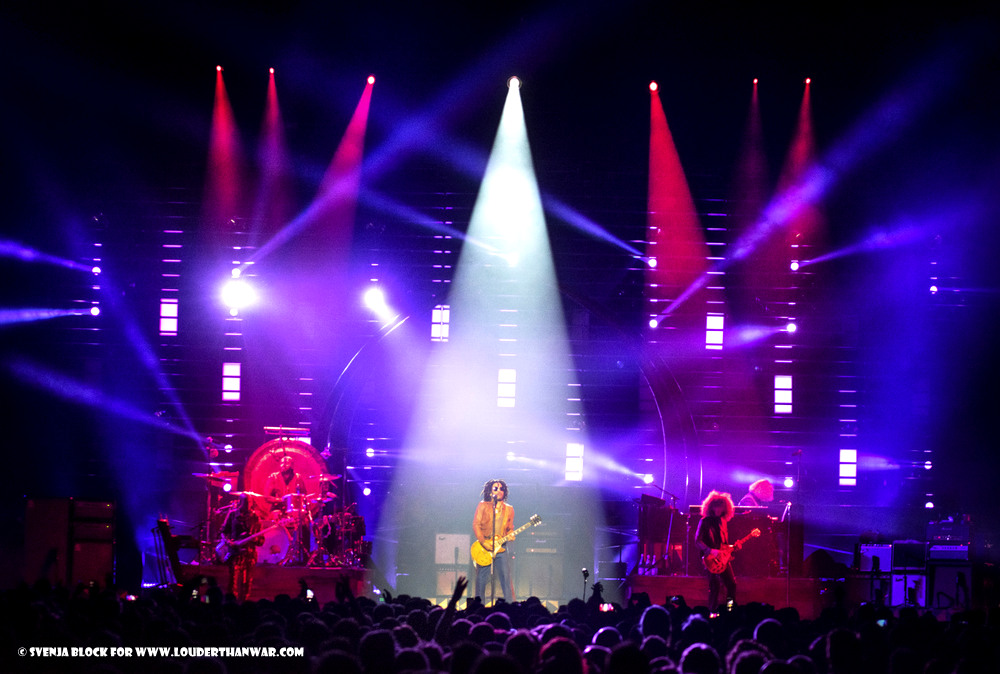 Lenny Kravitz is still doing it right after all these years. And it’s all down to his nostrils. LTW’s Andy Duke reviews his gig at London’s O2 Arena and rediscovers the almighty power of smell.

Lenny Kravitz is responsible for one of my favourite phrases in rock music. When questioned about a world tour he was about to embark on in the mid-90s, Kravitz cheekily said he was “ready to go out there and smell the shit”. Rather than describing faecalphelia, the singer was referring to the nostril flared, mouth pulled downwards like when you’ve got ‘a whiff of something rotten’ expression that guitarists often employ when exploring the dusty end of the fretboard. Kravitz fortified his answer, while doing that very expression, with “because if you ain’t smelling the shit – you ain’t doing it right”. And, some 20 years on, Kravitz is still ‘doing it right’ as his Raise Vibration Tour made a pitstop at London’s O2 Arena.

The stage design is unsurprisingly old school and the normally ubiquitous video screens that go hand in hand with an arena gig of this size are nowhere to be seen. But a large gong, favoured by legendary skin-bashers like Bonham and Moon back in 1970s, is proudly perched behind the drum kit. In addition, a Nigel Tufnel-worthy number of vintage Gibson and Fender guitars are ready for action by the side of the stage.

Just a few minutes shy of showtime, I scan the crowd as Arrow Right Through Me by Paul McCartney & Wings blasts from the PA. The age range of the audience is as vast as the genre influences in Kravitz’s back catalogue. And, judging from the ongoing spillages of lager, wine and spirits that will soon plague the O2’s cleaning staff throughout the gig, the crowd are in a decidedly celebratory mood. Macca’s best offering from his Back to the Egg album is slowly replaced by a seat-shaking drone of We Can Get It All Together as the venue’s lights give way to blood coloured strobes from the stage. A Hammond organ joins the sub-bass quake with a delicious wash of rotating Leslie speaker goodness. Kravitz positions himself behind the band. Centred on a raised platform between two vast floor-to-lighting-rig horns, the gang launch into Fly Away. 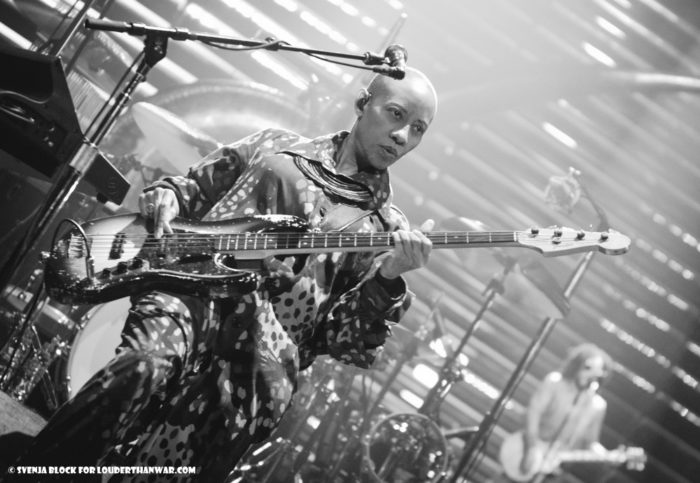 The band are tighter-than-cramp with Gail Ann Dorsey absolutely nailing Jack Daley’s original slaptastic bass line from the 1998 hit. And I’m pleased to report that drummer Franklin Vanderbilt incorporates the aforementioned gong to great effect at the end of the track. Bonzo would have approved.

Although having Kravitz performing up in the heavens is a powerful image to start a concert with, he does seem a bit detached from the proceedings yet surprisingly doesn’t come up front until they’re three songs into the set. And it’s from this point that the performance really begins in earnest with dreadlock shaking and ‘shit smelling’ rock posturing aplenty. 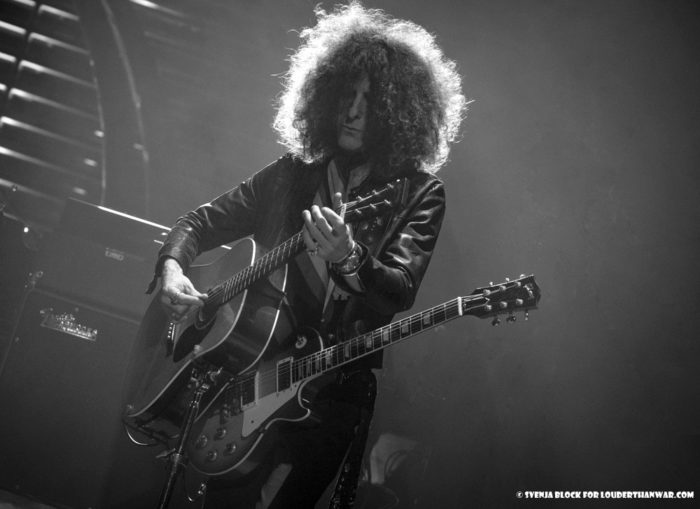 Looking like Noel Redding from the Jimi Hendrix Experience circa 1967 and embodying the spirit of Jimmy Page in his fret frottaging, guitarist Craig Ross is a force of nature throughout the set. With so many stylistic changes to contend with and an undoubted passion to convey the recordings accurately live – Ross seldom goes more than two songs before changing guitars. And it’s for a good reason. From delicate soul-tinged offerings to unapologetic rockers, Ross needs to be as varied in his sonic arsenal as Kravitz is in delivering the varied material vocally. And ‘varied’ doesn’t do tonight’s performance justice. A crowd-pleasing rendition of The Guess Who’s American Woman, for instance, gives way to squelchy acid-house (complete with TB303 bass sounds) before a three-member brass section unexpectedly joins the band. Kravitz and the gang then launch into a Bob Marley’s Get Up, Stand Up. 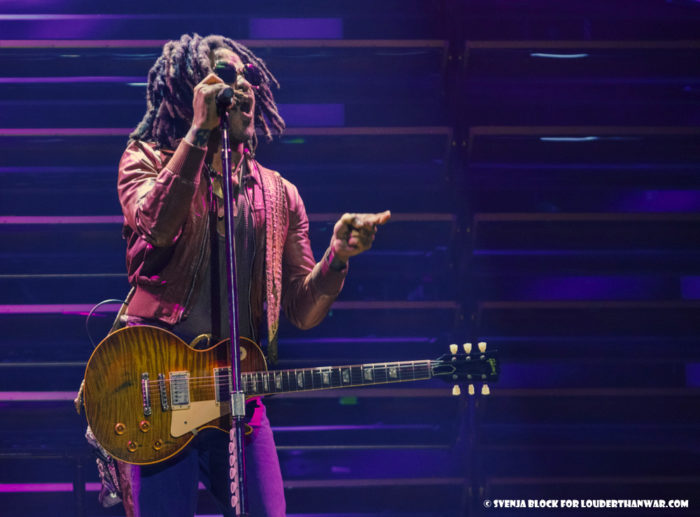 There’s a lot of faffing about between songs which, rather than being a criticism, is a refreshing change to most gigs of this stature that tend to feel overly programmed. In an effort to engage with his crowd that little bit better, Kravitz frequently comes off the microphone and sashays to the far reaches of the stage to merely nod and wave to his audience. This happens at regular intervals and makes a 20,000-capacity venue like the O2 feel a lot smaller. His banter, while just touching the cusp of cheesy, is earnest and celebrates his love of life. And, when he decides to go slightly political following an emotive version Who Really Are The Monsters?, the NYC-born singer manages to speak volumes about notable world leaders without mentioning any names. Kravitz is a class act. The rock ‘n’ spirit is also still very strong in this one and he remains charmingly irreverent to rules. Three-quarters of the way through the set, he scans the attendees and says “this venue has a strict curfew. I don’t think I’m gonna make it. And I’m not sorry” before jokingly adding “I’m even gonna ask for the trains to run later for you guys”. His fans lap this up as much as his management must fear to have to deal with hefty fines for the band playing past 11 pm. 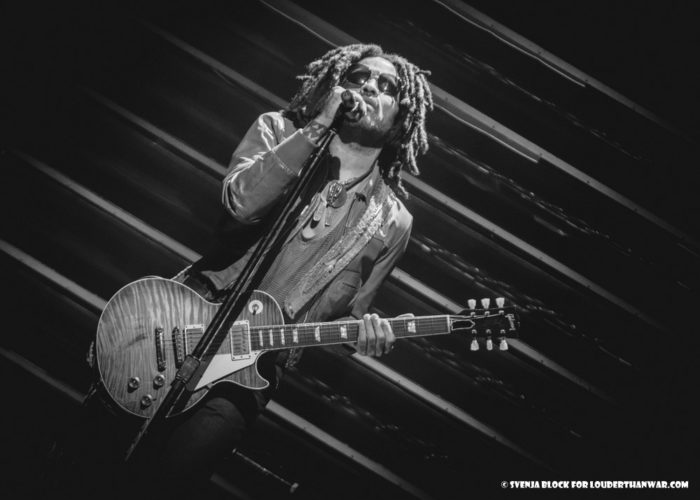 Kravitz is clearly at the top of his game. From the high falsetto of It Ain’t Over Till It’s Over to the melodic screaming of Are You Gonna Go My Way?, his vocals are effortlessly delivered. And he’s well served with tremendous BVs and harmonies care of Dorsey and Vanderbilt. An honourable mention needs to go to saxophonist Harold Todd for the sheer fluidity and energy in his solos alongside his two formidable partners in brass section crime. George Laks’ keyboards, while not present for the whole set, also add layers of luscious counterpoint to Kravitz’s creations confidently.

The set beautifully covers Kravitz’s three-decade-long career and the hits are well spaced out. Although newer tracks like 5 More Days ‘Til Summer get a lacklustre response, this is not to say that they may not develop into future classics as Kravitz’s latest album Raise Vibration proves he’s still a force to be reckoned with as a writer.

Despite his threats to the contrary, Kravitz’s epic version of Let Love Rule finishes the set just a few minutes shy of the curfew. Proof that this iconic performer can ‘smell the shit’ without breaking the rules. 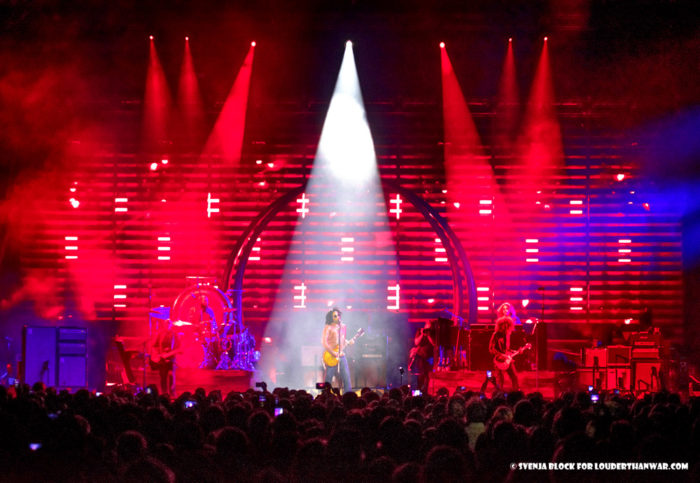 All photographs on this page © Svenja Block. You can find more of Svenja’s work at her Pixieset, Facebook and at her Louder Than War author’s archive.

Please note: Use of these images in any form without permission is illegal.