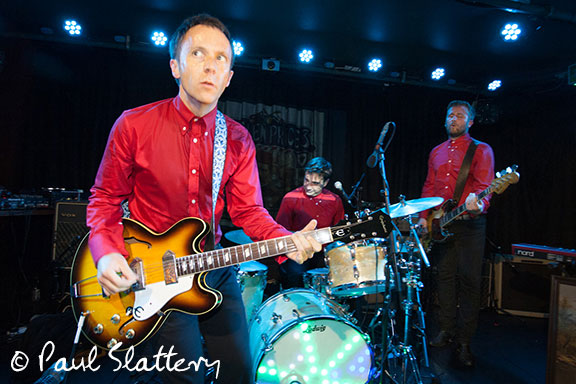 LTW couldn’t find a regular correspondent to cover this sold-out gig as there is just so-much-happening in 2017 but luckily Amy Kilroy-Buck sent us this wonderful account of a fabulous gig.

The Water Rats in Kings Cross may be better known to some readers as The Pindar of Wakefield, famous for hosting Bob Dylan, The Pogues and numerous other big name acts, and recognisable to fans of The Prisoners as the location for the band’s now legendary appearance on The Tube in 1984.  Since then it has undergone a name change and a facelift, and is a rather pleasant little pub with a back room that holds 200 people. It’s a new location for Steve ‘Retroman’ Worrall to host one of his gigs, which had sold out some weeks previously, as have his next two shows at the same venue.

The Len Price 3 have always had a reputation for electrifying live shows, and as the promo for the gig had promised us ‘unexpected sights, lights, sounds and guests’ there was a good deal to live up to. DJ Dave Edwards took the place of a support band, and after the doors opened at 8pm he had a good hour of tunes, with the back room lit by swirling psychedelic oil lamp projections.  ‘Unexpected sights’ were amply provided by film projections onto a screen as we were treated to the quite staggering weirdness of ‘El Topo’, a 1970 acid western (apparently that’s a thing).

The band arrived on stage shortly after 9pm, and opened with a blistering rendition of Childish Words. The striped blazers of their early gigs are long gone, and have been replaced with some rather fetching dark red shirts, but the swaggering attitude and energy that sets them apart from many of their contemporaries remains unchanged. Obviously as an album launch the focus was always going to be on new songs, but there were plenty of old favourites mixed in too, with My Grandad Jim and Picturess appearing early on, much to the delight of the audience. The Lennies are always an energetic band, but all three were particularly animated, and did genuinely seem to be having a whale of a time.

We didn’t have to wait too long for the arrival of the promised special guest, none other than long term LP3 associate Graham Day, who joined the band to play guitar and keyboards for a few songs (yes, apparently there is nothing he can’t play) before sidling back into the wings to watch. 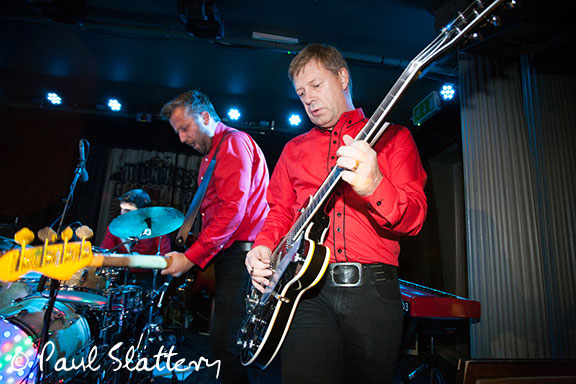 In previous years its been very unusual to hear the band do their slower, gentler songs live, so it was good to hear the minimalist renditions of Pocket Full of Watches and Letting You Down, before they stormed back into the rest of the set.

I can’t think of many gigs I’ve been to where everything has gone completely smoothly, and this was no exception; a broken kick drum pedal early on, Glen’s Epiphone taking a nosedive onto his pedals and a brief scramble to get things working again before giving up on the pedalboard entirely and going straight through the amp. Of such things is live music made, and the band approached these hiccoughs with good humour and some gentle banter before carrying on regardless.

A mix of old and new material rounded out the set, with singalong favourites London Institute and Julia Jones drawing a particularly enthusiastic response from the crowd. The band played for just short of two hours, no mean feat in a rather cosy venue, and were joined again by Graham Day for a cover of The Gaolers Get Off My Track before rounding off their encores with Chinese Burn.

The Len Price 3 occupy a strange place in today’s live music scene; they dislike being labelled as mod apparently  (possibly another reason for the retirement of the blazers) and have never perhaps enjoyed the success and popularity fans feel they should, playing only a small number of gigs each year, and remaining largely ignored by the music press. It’s important to consider though that this may be exactly the way they want it, although as Kentish Longtails gathers momentum there are more reviews than ever springing up online, and dates already being advertised for gigs next year.  Could this be the start of something bigger for The Len Price 3? As a fan, I hope so.

All in all a fantastic gig from a band who just keep getting better and better.

And here is the brand new video for Man In the Woods from the hit album Kentish Longtails.

All words by Amy Kilroy-Buck.

(Many thanks you two.  GB for LTW)