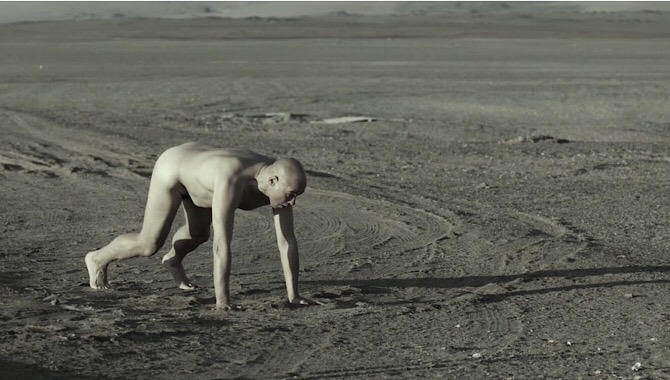 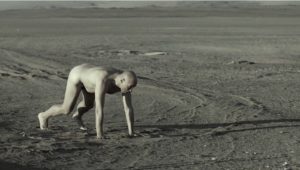 Lek and the Dogs is a bravura feature from director Andrew Kötting, inspired by Hattie Naylor’s play and based on the true story of Ivan Mishukov’s time as a young child living with feral dogs on the streets of Moscow.  This film is a showstopper, a rarity.  It is the kind of unclassifiable cinema that is a testament to the art form as the most dynamic of all.  It articulates such a range of human experience that it might be regarded as a form of experimental human phenomenology in itself and yet, pleasingly, it is as far removed from the didactic as it is possible to be.  Kötting is an artist as well as a film maker and this is the perfect fusion of art and film.  As intriguing and thought provoking as the subject matter, the film takes many forms – just like its main character it is a manifold of uncontextualised performance art, incredible landscapes and close up monologues redolent of Brando’s Kurtz, interspersed with highly convincing faux home movie footage.  Lek and the Dogs has the aura of a film that will be talked about and debated in hushed, reverential tones for decades to come. Kötting has made cinema of the now.

The film begins with an exhortation to tell the story like it’s now.  Pretend it’s now.  When is now?  Throughout the film there are nothing but questions.  Every sliver of resolution is a false summit presenting further questions.  Look over your shoulder.  Look back down the path, circuitous though it may be – winding, for sure.  Questions, questions, questions.  Questions and questioning are the hallmarks of all great art.  Questioning and art as goad, as stimulus, as a restless craving, however wandering it may be, resting for a moment here and there on the edge of a desert or lurking in a subterranean cavern.

Is this a contemporary film?  It feels contemporary, it feels ancient: again – it occupies the realm of the classical: the film has the freshness of the opening and unfurling of a hitherto unknown species of flora and yet the fragments of the story, the fragments that we can perceive, the ‘story’ that we can stabilise in our consciousness, is rooted in the ancient, the primal, the primordial.  Romulus and Remus run with the pack through the pixels of this twenty first century experiment.

You might well ask.  Displacement, alienation, fractured narrative.  2018?  2018, now, the idea of the shared present as a provocation, a challenge, a call to arms, a rallying cry, a pull on the strings of all us puppets.  Tell it like it’s now.  Tell it as though we have at least the pretence of a shared moment, a shared emotional landscape however unreal that may be.  Tell it like it’s now under the freezing desert sky of photon fuelled photos of a past that hang there, visible yet forever out of our reach.  Tell it like it’s now in your European apartment, your English house, the unmade land between the graves of a thousand pets, their hollow kennels no refuge now.

There is a straight forward story underlying all of this.  It’s buried.  Buried with the dogs that we can only assume, from the gaps in the monologue, were tortured.  Lek and his dogs are metaphor for the tortured, for the dispossessed, for the defeated, for the outcasts.  Lek and his dogs are the tortured, the dispossessed, the defeated and the outcasts.  They are metaphor and they are not metaphor.  Lek exists and tells the story and yet in no sensible way can Lek be said to exist.  Lek is a multitude of dogs, running with the pack, scavenging, a scourge, ostracised, cast out to the hinterland – of where?  Of nowhere: the hinterland that is an un-place, devoid of identifying features, stripped of diversity and pared down to the very remnants of organic existence.  This hinterland is the hinterland of any given city, of any given country but most certainly it is the hinterland of the human experience.

I heard east European accents, something that evoked the Spanish heritage of South America, scenes take place in England.  The end credits confirm locations in Chile and Europe.  In the desert scenes Lek is presented as a human becoming dog, a feral shuddering beast proceeding with considerable practise upon four ambling legs (two hands, two feet) and naked, shimmering in the black and white desert sun.  He pauses, looks up over his shoulder at the vast escarpment behind him.  Is life possible in these conditions?  What kind of life is possible in these conditions?  Against the scree covered edifice rising in the background, I caught a glimpse of a dark bird soaring over the rocks, hunting.  My eye became fixated on the bird as it traversed the cliff, the camera panning left and the bird moving to the right with an effortlessness that only served to accentuate the burning pain of Lek’s unprotected soles against the rubble of the desert floor, of his all-too-human knuckles and palms against every tiny stone on his interminable pathway.  There are no signs of emotion on his face.  He is undeterred.  He simply exhibits signs of physical exhaustion and scans his environs.  Lek is becoming dog, becoming bird, becoming mountain: scavenging to survive, keeping moving, hardening amongst the rubble.

There is the intermittent voice of the therapist.  A radio voice.  A radio 4 voice.  Lek is contextualised, removed, classified.  Lek is ‘understood’.  We do not want to climb the tree and ascend to the heights to which he has ascended.  Lek as warning.  Do not climb the tree.  You cannot come down from there.  From there, you can never come down.  Post-trauma, for those who fall in love they enter only a new danger zone, all risks enhanced, all bets are on: there is everything to lose.  From this perspective, love and relationships become a high-risk strategy that only awaken and exacerbate the trauma.  Sure, there is integration.  There is the domestic, the goofy, the home.  Lek is only ever the dog who is allowed upon the couch.  Before long, he is running with the pack again on the edges of the city that is not a city but the hive of human touch, of companionship, of the touchstones of shared experience, of knowing beneath those unfathomable desert sky photons… we are not alone.

Nietzsche and Dostoyevsky wrote rampantly about the imperative to go underground and Lek knows he must submerge himself, he must go underground.  We see him move between scenes in his own life through a network of tunnels.  From above, an undifferentiated aerial view of an abandoned shanty town, rigorously laid out in a rickety grid in the sand, is disrupted by the sudden movement of a sheet of hardboard… a bald head emerges from the darkness of the tunnel mouth swiftly followed by Lek’s body, disgorged by the imperviously black hole.  Is he trying to somehow find his way back, or is he simply obeying the laws of his ever becoming nature – to keep on moving and to somehow continue to survive?

You can watch the trailer for Lek and the Dogs below: