Can a mixing desk be haunted? 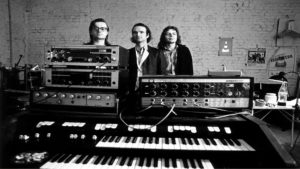 The producer of The Cure’s purple patch David M Allen has shipped Connie Plank’s fabled desk – famed for its warmth, character, and having recorded Kraftwerk’s ‘Autobahn’ -wholesale to Studio 7 in Tottenham Hale.

At the heart of the studio’s set up is ‘The Plank’ – an incredible 1970’s hand built 56 channel analogue recording desk designed and used by infamous Krautrock producer Konrad “Connie” Plank. Originally situated at his studio in Cologne it was moved to Studio 7 in 2015. During Connie’s illustrious career he redefined music production working with artists like Kraftwerk and Ultravox and inspiring Bowie and Eno’s production on their ‘Berlin Trilogy’ series of albums.

Despite its age ‘The Plank’ is still making history today having been used to record and mix many recent albums including ‘In Our Heads’ and ‘Why Make Sense’ by Hot Chip, ‘Right Thought, Right Words, Right Action’ by Franz Ferdinand, and ‘Communion’ by Years and Years. In addition to the desk Studio 7 also has a world class selection of hardware, software, instruments, amps, keyboards and microphones. It has been designed to offer the perfect blend of analogue vintage equipment and state of the art modern A/D conversion and software.

The Studio 7 Production team is Laurence Loveless and David M Allen. Dave has had a distinguished career in music production that started back in the early eighties when he was assistant to Martin Rushent at Genetic Studios. Here he worked on many albums including engineering ‘Dare’ by Human League. In 1984 he started working with The Cure producing many of their greatest albums including ‘Kiss Me Kiss Me Kiss Me’ and ‘Disintegration’. His production credits also include Sisters of Mercy, Neneh Cherry, The Charlatans and Depeche Mode.

Laurence Loveless forged his reputation as a singer and composer during the Art Rock scene in the early Naughties when his band The Social toured with acts such as Babyshambles, Art Brut and The Rakes. As well as composing and producing his own music he has gone on to record and mix for many modern artists such as Policia, Band of Skulls, Mystery Jets and Phantogram. He has composed and arranged music for a wide range of artists and projects, has a degree in music composition and production from the London College of Music and is an accomplished opera singer.