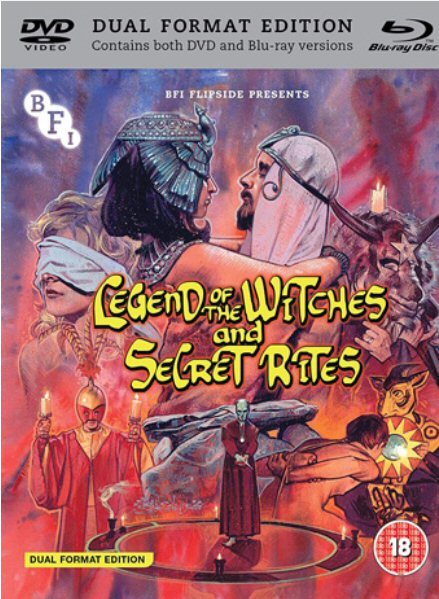 First up, the shorter film, just like the old double bills of the 1970s.

Secret Rites was directed by Derek Ford, a man synonymous with sexploitation cinema. Quentin Tarantino is a fan and owns a 35mm copy of his Girl From Starship Venus (1975). He even claims it’s one of his favourite British films.

Luckily the ‘one-true love’ of the young woman comes to the rescue in the nick of time. Looking like a cross between James Hunt and Captain Kronos, John Goodfellow wards off the Satanists, brandishing his cross at them until they cower.

This is so staggeringly overblown, it must surely be a parody?

The screen freezeframes. ‘This is the popular conception of what witches do and how they practice their craft,’ we’re informed. Phew. Asked his opinion on what we have just seen, the self-styled King of the Witches dismisses it as ‘a lot of rubbish’, before complaining about how risible many of the commonly held myths about witchcraft can be.

We then meet Penny, who wants to join a coven although we never find out precisely why she is so keen to do so. Penny is far removed from the stereotype of the witch as a toothless crone dressed in black. Although she does wear black hotpants and knee-high boots. As she emerges from Notting Hill Gate Underground station, she looks like she could be on her way to a modelling assignment for Nova. 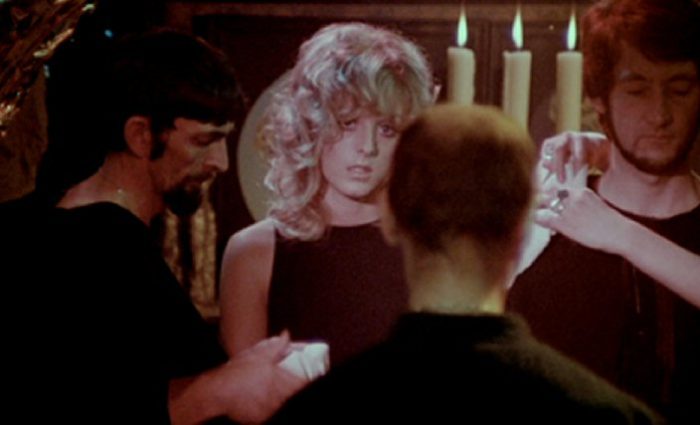 How authentic is Secret Rites? Real locations are utilized but much of it is shot in a studio. Sanders and his wife Maxine, who is also active in the coven, are real Wiccans but Penny comes across like an actor.

So I checked. She is. And she’s modelled.

Still, I assume the staged initiation rituals that Penny undergoes are an accurate enough recreation of what a new member to a coven would experience. The same goes to the wedding (or handfasting) conducted with the bride and groom both naked, although I have my doubts that there’s always someone dressed as a horned god in attendance. 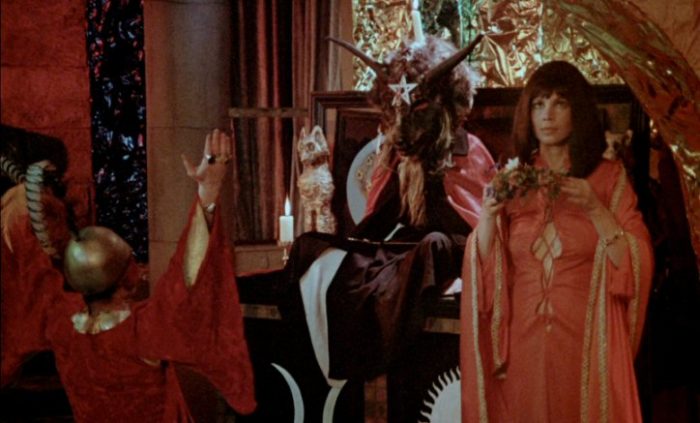 Finally, and with much ballyhooing, Ford presents us with ‘the rarely witnessed, never photographed, ‘Egyptian rite of Ra, taken from the forbidden Book of the Dead’. Said to be the most sacred of all rituals, this takes place in a room decked out in tinfoil. Huge portraits of mythological gods such as Isis hang on all the walls. Sanders wears a jackal head, some of the females have slapped on Cleopatra makeup and nearly everyone has decorated themselves in glitter and presumably the leftover tinfoil.

They look like a cross between ancient Egyptians and glam rockers. It’s soundtracked by a hallucinogenic musical freak out by The Spindle and lit with lysergic lighting.

Batshit crazy? This cynic would say so. Engrossing? Absolutely. I’m already even feeling a compulsion to seek out Girl From Starship Venus. 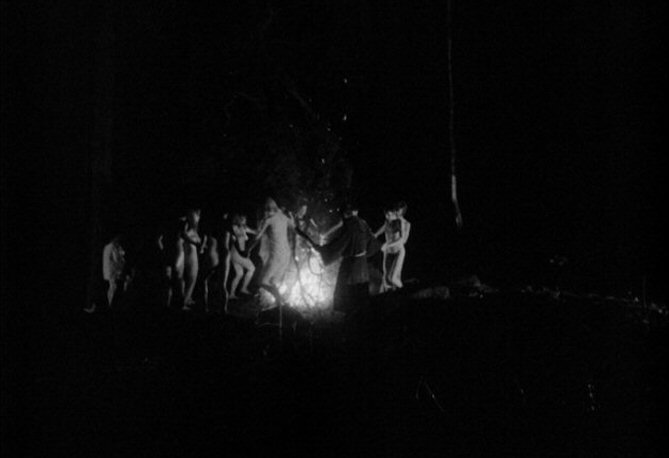 Like Derek Ford, Legend of the Witches director Malcolm Leigh will be best remembered as a sexploitationeer. Despite this, Legend of the Witches takes a relatively subdued and more in-depth look at witchcraft, though it has been accused of straddling the line between the serious-minded and the seedy. We’re certainly never too far away from an extended ritual sequence, with naked bodies dancing around flames or gathered around magic circles.

We start, though, with a version of the Wiccan creation story of Diana the moon and Lucifer the sun. Parallels between Christian and pagan rituals are drawn, and time is spent putting witchcraft into a historical context and reflecting on its influence on everyday life.

Again, there are appearances from Alex and Maxine Sanders who seem to have been the Posh and Becks of British witchcraft in the 1970s. Okay, maybe not quite, but they certainly racked up tabloid column inches aplenty while promoting their brand of Alexandrian Wicca. They also released an album together on A&M, toured a witchcraft roadshow across the country, played host in their West London home to the likes of Marc Bolan, and provided technical assistance on Eye of the Devil (1966), a chiller that starred David Niven and Sharon Tate.

The initiation ceremony shown here is much more elaborate than the one Penny experienced. It takes place outdoors with an emphasis on the four primeval elements of earth, air, fire and water. Why such a difference?

I’m further confused when Sander’s coven demonstrates how to put a death curse on an enemy. In Secret Rites he strenuously denied Wiccans would behave in this way. 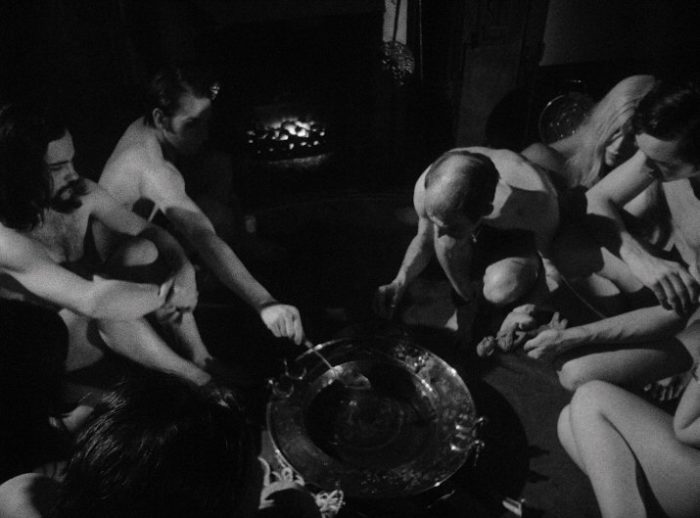 Passages examine standing stones, the often barbaric persecution of witches, divination and sacrifice. We’re given a guided tour of Cornwall’s Museum of Witchcraft. Displayed here are the remains of the last witch to be executed in England and artefacts from around the world.

The investigation into a haunted house is about as persuasive as some hokey ghost-hunting TV show, but the black mass proved far more compelling, as did the segment showing scrying, where a coven member strives to glimpse into the future. Dig that trippy sitar music and those swirling spirals.

Legend of the Witches is a little too long and its narration too dry for my liking. Even so, stretches of it proved intriguing enough to make it a very worthwhile, though never totally bewitching, watch. 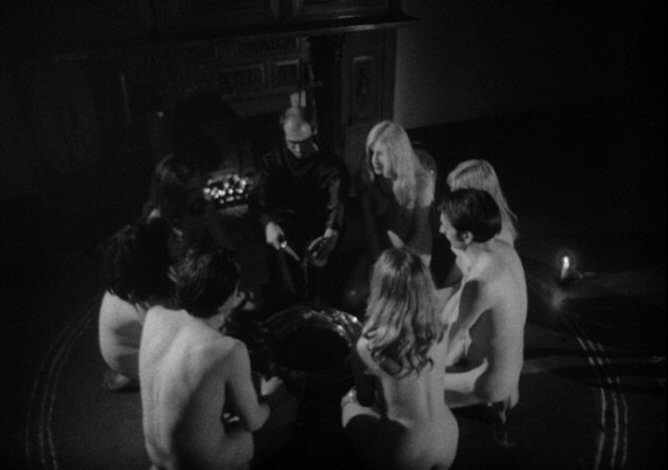 This release contains some impressive special features. These include The Judgement of Albion (1968) by Robert Wynne Simmons, a visual essay on visionary artist William Blake. Getting it Straight in Notting Hill Gate (1970), takes a look at countercultural life in London’s hippy central. Directed by Jo Gannon, Pink Floyd’s one-time light show operator, there’s an interview with Caroline Coon railing against ‘the fuzz’ for victimising pot smokers and psychedelic mandala paintings by Larry Smart. My inner hippy found it fascinating until my inner punk surfaced the moment Quintessence began performing the track that gave the documentary its title.

The accompanying booklet (only available with the first pressing) is arguably the best extra of all with a number of illuminating essays from experts on cinema and paganism.