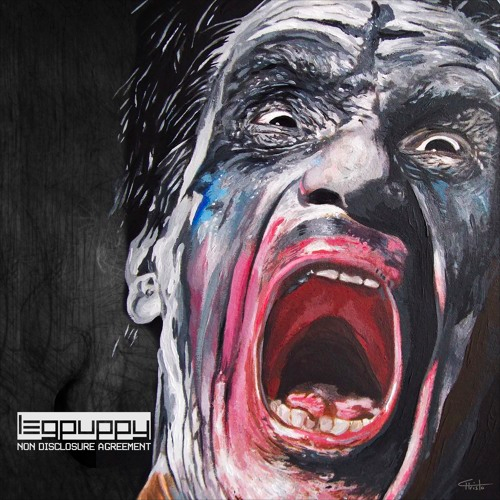 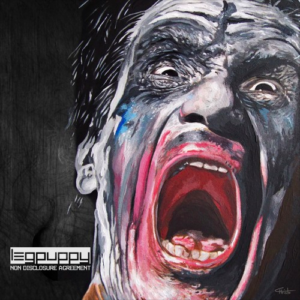 ‘The idiots are self-regarding consumer slaves. Oblivious to the paradox of their uniform individuality. They sculpt their hair to casual perfection. They wear their waistbands bellow their balls. They babble into their handheld Twit Machines, about that ‘cool’ email of the woman that got bummed by a wolf. Their cool friend made it; he’s an idiot too.

Welcome to the Age of Stupidity, pale the rise of the idiots.’

Leg Puppy are the new-age electro Luddites, here to warn us all of the danger of social media, the speed of life, and the hypocrisy of it all. Taking influence from the Charlie Brooker, Chris Morris penned Nathan Barley, they are here to show the grim reality a 2005 sitcom had predicted.

With an album cover designed by Cristabel Christo, it is reminiscent of King Crimson’s Schizoid Man. Three tracks on the album feature London chanteuse, Voi Vang. These begin Tears, Nominate 10 and Twit Machine T2. Remixes of most of the album can be heard on the bands YouTube channel, which is also used as a 21st-century propaganda machine, with short clown-clad videos warning us of the Rise of The Idiots.

A standout track for me is the eerie text-to-speech spoken word, Speak Talk Speak. A Tannoy announcement capturing the nightmare of such Tweetable occurrences such as late trains, good coffee, bad experiences, chipped nails and lovely days. This song preaches an almost Orwellian version of Choose Life, one in which Big Brother is always monitoring our progress.

The album moves from Prodigy-esque dance-punk into slow, almost haunting melodies, such as those found on the penultimate, Corgi Stop. However, sometimes it feels like a hindrance to the coherence of the album, but when Leg Puppy wants to make a statement, they do. And they do it loud. The album closes on the 9-minute epic that is NDA. This track is the perfect closer. It captures the subtleties of the quieter moments of the album and ties them together with the harder dance-driven beats. It captures an anxiety, an anxiety that has been caused by the constant tuned-in culture of modern life.

Leg Puppy are out on their own, they operate on their own terms and utilise the very systems they criticise to their own artistic advantage. Follow them on social media (as they often live-stream new tracks). Watch their YouTube channel for clown-faced lunacy. But most importantly, listen to their music, whether streamed or purchased. Turn on, tune in, drop out.

Non Disclosure Agreement is released on June 21st and can be purchased or streamed here.