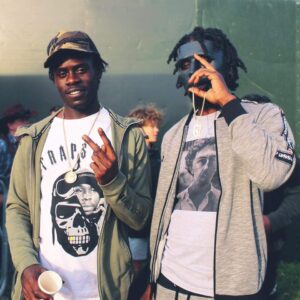 Masked up British Grime artists and showstoppers; 67 at Leeds Festival

The second law of thermodynamics suggests that heat cannot pass from a colder body to a hotter body. Metaphorically, then, it has to be said that the majority of the stages, even the Mainstage, weren’t capable of passing any heat onto the Radio One Extra Stage at Leeds and Reading Festival. This was the one hosting the British Grime Artists, and the one that had it going on. If anyone was paying attention on the day, the most energetic, combustible and menacing scene was happening right here.

You’d think Eminem would have gotten his ass down there incognito just to stay relevant and edgie, but no. This brand of music is however, here to stay! Grime is the New Punk!

Walking around the Festival site, it was pretty apparent, that this was no longer a Rock oriented Festival, or the crowd didn’t reflect that. Everywhere – a hoard of teenagers, were celebrating, or trying to forget recent GCSE results – being at their first Festival – those were the days!
All roads seemed to lead, not to Rome, but to the BBC 1XTRA Tent which was by far the most populated arena.

Upon arrival, it was quickly noted to be bursting at the seams, with an energy unparalleled across the rest of the Arena. Grime Artist Cadet’s Set clearly provided what the younger crowd was after both in terms of music and vibes. The Crowd separated to form a massive mosh pit on numerous occasions, much to the panic of the stewards who looked on helplessly as all health and safety precautions were breached.

This trend continued with other Artists such as Abra Cadabra, 67 who kept the area full and rocking throughout their impressive Set. Checking out other areas confirmed what was already apparent; that the music on offer simply wasn’t appealing to the younger masses. Much larger tents such as the NME Tent remained half empty with little or no atmosphere. (see Photos)

There was a good atmosphere throughout the day until a cringeworthy Korn took the stage with a litany of ‘motherfucker this’ and ‘motherfucker that’, turning the air blue at what is after all a family festival. They weren’t received well. In fact, it seemed that a majority of the crowd weren’t very familiar with them at all, which was strange for such a high- profile Rock band at a Rock Festival?

On the other hand, when the much more current and popular rap group Migos came out they were met with Vast numbers of screaming, jumping and ecstatic fans. However, it seemed they had their sound cut, perhaps due to the rumours they had arrived onsite late. It is clear that a shift in interests at this once great Rock Festival has occurred, and maybe it’s time the Curators and Promoters realise this and cater to their new found audience better?

Major Lazer did a great job of warming the festival up for Eminem, despite red-lighting the sound system, which was so bad towards the end of their Set that people were seen heading away from the Mainstage.

Next there was a very worthwhile hour spent talking with Suzanne Maloney Wright from Music Support, a great new initiative in their inaugural year providing welfare to the Artists backstage at the Mainstage in relation to alcoholism, polydrug misuse and the full spectrum of mental health issues. It is so excellent that as an industry, there is a newfound trend towards acknowledging that as an industry, everyone has a duty of care towards our Artists. Especially Labels and the primary holders of Publishing deals…

In the presence of a gorgeous sunset and in weather that was balmy and comfortable, Eminem’s barnstorming grand entrance set the whole place cheesing to ‘Square Dancing’ from the Eminem Show, (2002). From that they went straight into ‘Wont Back down’, ‘3 am’, and ‘Business’ while Mathers was jockeying with his Wing Man Denaun Porter.

The pair of them seemed to fall back into some weird old Bob Hope/Gerry Lewis kind of Showbiz thing, but it did work. The patter and narrative seemed to be a lot of: ‘Do you remember, back in the day, when we were boozing and using…’ Eminem went through several costume changes and was at one point sporting a Tee shirt with FACK TRUMP emblazoned across it.

Before ‘White America, and moving continuously across the stage, he spoke with heartfelt and bitter resentment:

‘I dunno if anyone’s here has been paying attention to what the fuck is going on back in our country, back in the States, but, its kind of making me not want to be there right now. This is the part of the Show where I don’t cause a bunch of controversy by naming names and shit like that, but this motherfucker Trump, I can’t stand him!’.

For any shortcomings up to that point, including daft rumours in the Artists Enclosure not to look directly at him if he graced us with his presence, speak if not spoke to etc, and which were all unfounded, all was forgiven. The entire collective gathered in the Arena were feeling him, and so when he instructed the crowd to:

Bramham Park concurred and did so as vociferously as if their lives depended on it.

The show also included Medley-styled condensed versions of ‘My name is’, ‘The Real Slim Shady’ and ‘Without Me’. This was bucket list stuff indeed. However, the most moving part of the night was when Eminem dedicated ‘I’m not afraid’ to anyone who had lost anyone to an addiction.

This is what he said:

‘Lets get serious for a moment. This last song is dedicated to anyone who’s ever lost somebody to addiction, is going through it themselves or been through any kind of struggle. ‘Cos I know I couldn’t have gotten through my shit with out you.’

On the whole, a great day, but one with much to think about for the Curators.