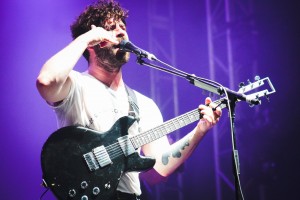 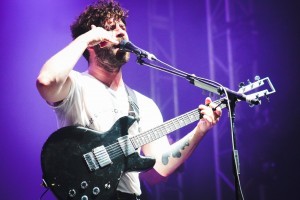 Still one of the biggest but still the best? Josh Northcliffe takes in the old and new and files from the front-line for Louder Than War.

Ever since 1999, Leeds Festival has been the North’s premier music festival and this year is no different – offering more genre diversity than ever before while still retaining its identity as a rock festival arguably better than any other British festival.

What first strikes me about this year’s line-up is the amount of bands well and truly at the top of their game, and while The Libertines offer a certain nod to the indie glory-days, alongside The Maccabees, Slaves, Mumford & Sons and Foals, they’re certain to boast top-10 records in their armouries before the year is out. It’s impressive going for an alternative festival, and add metal heavyweights Metallica, Boy Better Know and Kendrick Lamar into that melting pot and it makes for an eclectic bill.

So as we approach the first tangible day of music there’s a certified buzz encircling Bramham Park as fans super-charged on cheesy-chips, vodka-red bulls and £4.50 pints set their sights over the musical feast that today has to offer. Recent chart-toppers The Maccabees are a clear standout adding to their already impressive calendar year following the release of fourth album Marks to Prove It and singles Something like Happiness and Marks to Prove It sit well alongside old favourites Latchmere, Precious Time and Love You Better to offer a more matured live show.

Possessing one of the most exciting releases of last year The Cribs, however, opted for a greatest hits set during which the Wakefield outfit battled against the unforgiving West Yorkshire winds that mixed with their somewhat ramshackle approach and made for a performance that left you desiring of something a little extra. Jamie T picked up where that floundering ship took off and Zombie, Sheila and If You Got the Money is more than enough to suggest the Leeds crowd are buoyant once more.

Friday sees The Libertines headline their first visit to Leeds and Reading since one-off shows in 2010. This year’s different, though, as Doherty’s recovery from drug addiction and their first album release since 2004 suggests the Libs’ return is more than just flirtation or the chance to make a quick penny. This time it just feels right and while Pete and Carl’s relationship looks as healthy and intact as it ever will be, the set is still filled with enough on-stage fist-fights and run-ins to retain The Libertines’ spirit in all its shambolic glory and righteousness. Up the Bracket, I Get Along and What a Waster send the Leeds crowd into a mad frenzy before Don’t Look Back into the Sun is the fitting end to an unforgettable first day.

A slightly weaker Saturday saw the festival flex a new found muscle to showcase new and old talent across more genres than previous years, as Hannah Wants, Run the Jewels and pop heroes Panic! At The Disco all play notable sets. Honourable mentions should also be made to Drenge and Alvvays who delivered great moments on the Main Stage and the Festival Republic Stage respectively.

While Saturday’s commercial offerings in All Time Low, Bastille and Mumford & Sons are more than enough to pull respectable ticket sale figures, their existence on the weekend’s bill is enough to annoy the living heck out of Metallica and Alexisonfire fans arriving the following day.

Saturday undoubtedly belonged to B-Towners Peace, whose inspiring take on post-baggy was nearly enough to raise the NME/BBC Radio 1 Stage roof off in a literal sense. Backed by a sea of screaming fans and two impressive albums, the Midlands quartet were in irresistible form proving why they’re constantly touted as one of the most exciting and prominent bands on the touring circuit.

Sunday’s line-up is what we have come to expect from a Leeds and Reading Festival bill which is dominated by punk, indie and rock, while fresh new buzz acts in Blossoms, DMA’s and Pretty Vicious propose that the grittier guitar bands can still belong on stages like these. While DMA’s delivered sun-kissed moments of magic, Blossoms again suggested just why the Stockport band are being flaunted as one of the most important uprising bands for a number of years alongside Pretty Vicious, whose exciting blend of punk rock demonstrated why Virgin Records recently snapped up the Welsh outfit.

Sunday also showcased a not-so-secret set from Foals following their surprise appearance at Reading only two days earlier, which was a timely celebration of all things Foals and the journey the band and Leeds/ Reading have shared since 2007 which already has them as possible headliners for 2016 with some punters. Slaves and Royal Blood also triumphed in a day that was later crowned by the all-conquering Metallica, whose career-defining moment, Enter Sandman brought the festival to an explosive close.

Leeds and Reading Festivals may no longer be the straight up rock festival that fans still crave, but while the mainstream V and T in the Park Festivals have lost for most the part the identity they once had, Leeds and Reading still stake an important place in British youth culture, and this weekend was a celebration of just that.

All words by Josh Norcliffe. More writing by Josh on Louder Than War can be found at his author’s archive.

All photography by Kristen Goodall. More work by Kristen on Louder Than War can be found at her author’s archive.