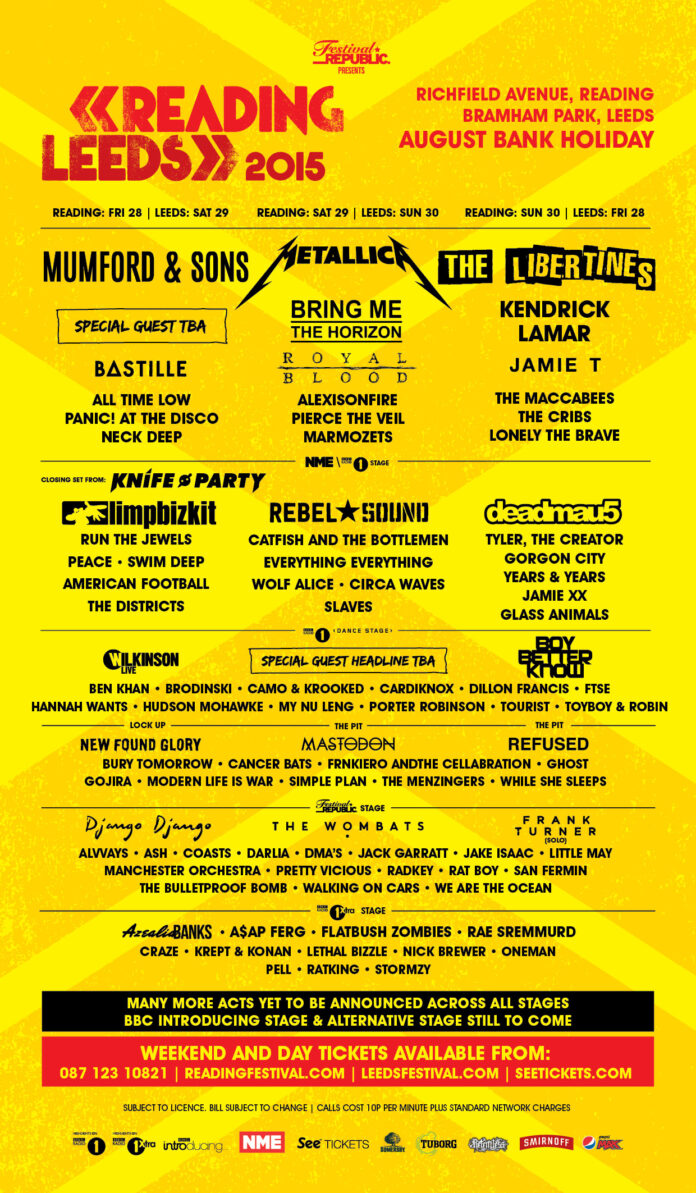 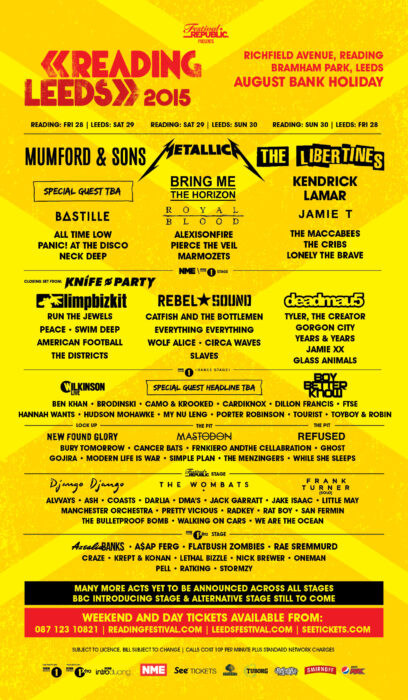 Josh Norcliffe previews this year’s Leeds festival which he’ll be covering for us over the August Bank Holiday.

If you’re an indie or rock kid from the north having just finished school, then you’re probably making the pilgrimage to Leeds Festival. Unlike the mainstream V and T In The Park festivals, Leeds together with its older sibling Reading, is what purists like to call a “real music” festival.  While this year’s line-up lacks the global giants compared with that of 2013 and 2014s offerings (Green Day, Eminem, Blink-182, Queens of the Stone Age, Arctic Monkeys et al.), this year’s list still manages to boast genre heavyweights such as Metallica and the Libertines, and for what this year lacks in huge stars (and controversially female acts), it makes up for in fresh new buzz-acts, and more genre diversity than ever before.

Friday at sees the Libertines headline following their all-conquering return to the festival in 2010- though this time fans are patiently anticipating a brand new chapter of one of the great rock and roll stories played out by Carl Barât and Pete Doherty. A recent Facebook post has told fans to “Expect album announcement soon”, and while it seems Doherty is now clean from drugs, let’s hope the band haven’t lost all sense of lawlessness. Fridays other indie offerings come from the Cribs, the Maccabees, Jamie T and Glass Animals, while credible Grime and Hip-Hop artists Boy Better Know and Kendrick Lamar make for an eclectic Friday bill.

On Saturday you can catch seminal emo band American Football as part of their first ever UK shows, or if you fancy a second round of Jamie T, then size up the Bulletproof Bomb on the Festival Republic Stage. With a mix of dream-pop and melancholy, Alvvays will deliver great moments, meanwhile Peace’s set at the NME/BBC Radio 1 Stage will be one of the most anticipated of the weekend. The B-Town front-runners’ take on post-baggy is normally received to high acclaim and this occasion promises to be no different- expect screams of “I love you”, fur coats and pretty rubbish moshing. Saturdays Main Stage is somewhat weaker and dominated by overly commercial acts such as Bastille, All Time Low and headliners Mumford & Sons, though a special guest sub-headliner is still to be announced.

Metallica headline the concluding Sunday night, and after declaring at Glastonbury 2014 they were there “to represent the heavier side of music, shall we say”, then Leeds is surely a stage ready-made for the likes of Metallica. The NME/BBC Radio 1 Stage hosts performances from breakthrough acts Circa Waves and Slaves, both receiving high praise ahead of the release of their respective debuts. Sunday also sees performances from young Welsh rockers Pretty Vicious -who are destined to crash into the mainstream, having recently signed to Virgin Records. Sundays other offerings include the sun-kissed brilliance of Australian trio DMA’S, and a highly anticipated Main Stage appearance from noisy Brighton duo Royal Blood.

While guitar bands are impossible to ignore, for those looking for something a little different, the BBC Radio 1 Dance Stage and BBC Radio 1XTRA Stages are chock-full of rap, dance and hip hop talent, and if you’re looking for a laugh after all of that, then head to the Alternative Stage for some comedy.

More announcements are set to be made in the coming weeks, and tickets are available here: leedsfestival.com/tickets.