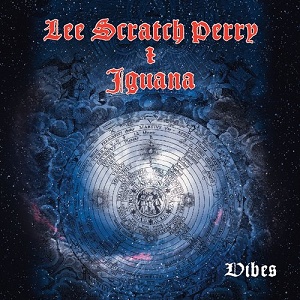 There can be few living artists that are well respected by fans and fellow musicians alike as Lee Scratch Perry. Whether he be genius or completely mad (the two often come hand in hand), his music has and always will touch everybody that comes into contact with it in some way or another.

On the Vibes EP, Perry teams up with Swiss reggae band Iguana to give us five tracks of quite simply, stunning quality. At the age of 78 you’d maybe think that he was just here for the ride whether it be his own or simply to boost his ego, but the man clearly still has ideas in abundance to offer.

With recording techniques that are clearly from the days when dub was a new music form right up to modern day effects and instrumentation, Perry has merged the two and released one of his finest most complete works to date.

Opener, the very catchy Get Down has clear funk (under)tones coupled with a sumptuous dubstep beat and a simple bass line. Tinkling keyboards and the subtlest of dub effects on both voice and backing make it a wondrous track. Add a little free-form guitar work and you’re there.

Roots Rock Reggae dos exactly what it says. A slightly more conventional approach but again with some lovely additions of snared drums and dubbed out keys. Amazing that the man still has ideas that are as fresh and original as anything else that is around.

Running water serves as the intro to Midnight Train. A song for the sun-kissed beach if ever there was one. A simple dancehall beat with some brilliant piano interludes and the almost trademark references to drug related substances. Rhymes that only Perry could write and get away with, and completely delightful.

Digi-dub is the order of the day on Run Rebels Run with a brilliant rolling bass beat which compliments the sharp snare and ridiculously superb electronic effects dubbing all over the place. Perry’s repetitive vocal chant is brilliant. This is the man at his modern day best.

Closer, the near instrumental Flash brings together basic reggae riddims with ‘that’ bass sound made famous by Adrian Sherwood and On Usound revolutionaries such as Gary Clail, Mark Stewart and the mighty Tackhead. Again, some delightful dubs and over a lazy reggae beat. The technology makes this track very special.

It would be nice to say it’s great to have Lee ‘Scratch’ Perry back, but he’s never really been away. The only criticism of the Vibes EP is that it’s not a full album. Brilliant stuff.