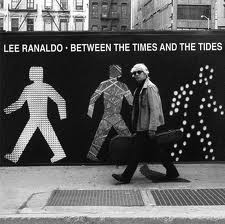 Sometimes called the George Harrison of Sonic Youth – and I have long thought he was the band’s secret weapon – Lee Ranaldo’s textural sensibilities were essential to the more abstract dynamic of Thurston Moore and Kim Gordon, the stabilising glue (or ‘Goo’) that held it all together…

Given his experimental avant-rock background, a lot of listeners are bound to be taken aback by his mellow and more conventional new solo release Between the Times and the Tides.

The result is a more focused and straightforward effort, which reveals Ranaldo’s fine storytelling abilities as well as a lovely, striking romanticism (the stripped down “Hammer Blows” and wistful yearning of “Stranded”).
While firmly grounded in traditional indie, the album is peppered with hints of discordance and the odd psych-rock freakout (“Xtina As I Knew Her”, “Fire Island (Phases)”). It certainly does not lack the atmospherics of his days in Sonic Youth, and from time to time there are echoes of the tangled intensity of “Eric’s Trip”.
Take opener “Waiting On A Dream”, where delicate diaphanous keyboard lines float in before being joined by confident guitar chimes and pounding drums. Ranaldo’s distinctive voice then takes over with it’s melancholic world weary wisdom, aided by the sweetness of a subtle female vocal harmony.

From then on it’s clear Between the Times and the Tides is going to be a strong guitar record (I was at the release party at Other Music in NYC and he had 6 different guitars lined up to choose from as he played). It boasts a star-studded lineup of quality backing musicians including Wilco’s Nels Cline (who is probably fairly responsible for the album’s Americana/alt country sound), influential minimalist Alan Licht, jazz man John Medeski on the keys, as well as old cohort and frequent collaborator Jim O’Rourke on bass and Sonic Youth’s own Steve Shelley on drums.

Second track and lead single “Off the Wall” is what REM might have sounded like in more recent times if they hadn’t hit that wall and been creatively castrated with their last few albums. The song unrolls with a solid, gloriously sunny melody, cascading arpeggios and moody slide guitar – an instant winner.

“Xtina As I Knew Her” is a dark and dissonant ballad of spooky guitar sprawls about a lonely party girl, recalling Neil Young and Crazy Horse at their most emotive, while “Angles” lifts the mood just a bit with some silky guitars and a groovy organ run.

“Hammer Blows” is a pristine acoustic confessional broken up by a solo of affecting forlorn howls, whereas “Fire Island (Phases)” alternates between a mighty rushing wail of swirling psychedelic guitars and a country tinged lap steel chorus. It is testament to Ranaldo’s supreme talents and the skills of the musicians on board that this seemingly chaotic jumble of ideas makes perfect sense here.

“Shouts” was inspired by the Occupy Wall Street movement, and in particular, the infamous “Vancouver Riot Kiss” shot by photojournalist Richard Lam of a couple kissing during the chaos that followed the Canucks’ 4-0 loss to the Boston Bruins in the Stanley Cup decider. Hammond pipes, pedal steel whines and a haunting guitar melody melt together as Ranaldo describes the ‘misfits uprising’ against a broken system, while his wife Leah Singer’s detached monologue is an eerie dead ringer for Kim Gordon.

‘Stranded’ sees Ranaldo again in a romantic mood, his acoustic guitar picking flirts with the spectral atmospherics of wispy pedal steel slides as he sings “I long for your lips/your arms and your hips”. While not technically amazing and barrier smashing, like the rest of the record, it shows off a welcome warmth from Ranaldo that has largely been discouraged or hidden away in the depths of cold invention and willful complexity.

The compositions on Between the Tides and the Times are still loose and slightly messy but restrained and tweaked enough to let Ranaldo really flex his songwriting muscles and shine.

Bottom line – a real treat for fans frustrated to see Ranaldo always restricted to a backing presence on all but one or two songs in the Sonic Youth cannon (memorable as they are), and a more than satisfying stopgap for fans still mourning the split of Thurston and Kim and the murky, uncertain future of their beloved SY.