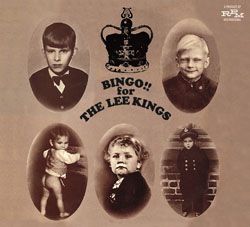 The entire recorded works by Swedish mid-6os hit machines and pals of the Hollies the Lee Kings, with demos, singles, EP tracks and their sole album. Ian Canty gets an eyeful of swinging Scandinavia

They didn’t muck about in 1960s Sweden, that’s for sure. In less than three years in the middle of that decade the Lee Kings managed to squeeze in recording 14 singles, a short film of their own entitled “Grejen” (“The Thing”), as well as the “Bingo!! For The Lee Kings” album which is the main feature on CD 1 here.

After a typical 60s background of skiffle and rocking, they started off as Lenne and the Lee Kings in 1965 with the smooth beat of “Stop The Music”. They were met with immediate success on the Swedish “Tio i top” charts as this disc went all the way to number one, sparking “Kingsmania”. The flip though, the strangely structured, stop-start “Always And Ever” is much tougher, a garage pop beauty that makes me think of early Subway Sect (I can imagine a young Rob Simmons with his guitar hitched right up playing this!).

Their stock in trade though was mainly mean and moody “hurt lover” style mid-paced laments, but they seasoned this with trying all-sorts of other styles, mainly to good effect. They’ve often been likened to the Hollies and that band did offer them “Coming Up From The Ground”, but perhaps the Searchers mixed with a harder Fabs (the Knickerbockers?) would really be nearer the mark, at least with their most recognisable sound.

The Lee Kings long player summed this up pretty well, beginning with the 12 string folk-rock of “It’s Not Right” which owed more to those Liverpool lads, the sadly forgotten Searchers, than the Byrds. After that there is the cool, positively gleaming but downbeat pop of “Don’t Go, Please Stay” and “The Trees Are Talking”, a wobbly cover of Sam Cooke’s “Shake” which plays fast and loose with the original, the blues pickin’ of “Give Me Another Beer” and the smart Mod pop of “Gonna Keep Searchin'”and that’s just for starters.

In a way it’s surprising that they only got around to recording the one LP – this 2CD collection has enough for 3 but there are a fair few covers which range between the sublime, psych and swinging version of Howard Tate’s “Look At Granny Run” to the cheese-fest of their version of 50s hit “Seven Girls (Sitting In The Back Seat)”, which can only bring on thoughts of Roy North gamely trying to sing on “Get It Together”!

It’s a treasure trove though that’s slightly out of tune at some points, cheaply recorded at others, but it’s all pleasing – even the bums notes sound charming now (“Gonna Keep Searchin” has some sticky but lovely moments). The second CD has their take on some of the big hits and key tracks from the UK and US of the time and if nothing else they put their own slant on each one of them from “Like A Rolling Stone” to Nina Simone’s “I Just Wanna Make Love To You”. Also, they attacked everything with a pleasing gusto and humour, even managing to end “Orient Express” with the Goon Show/BBC Radiophonic Workshop favourite “Major Bloodnok’s Stomach”.

The stingy, “catch em while they’re hot” production values don’t hamper the tunes much and it gives a feel of the supersonic pace that the Lee Kings were travelling at – by 1967 Lenne (Lenart Broberg) went solo, just leaving the Christmas release of the aforementioned Hollies track (a pleasing, slightly trippy piece of sunny pop) to wrap up their career.

Though the Lee Kings never crossed over to international fame (though there must have been some chart action in neighbouring countries – they recorded a “Finland-only” version of “Stop The Music” after all), in their own small way they built the platform for the later wav of Swedish garage rock in the 80s led by the likes of the excellent Nomads and made some fine and varied music on the way.