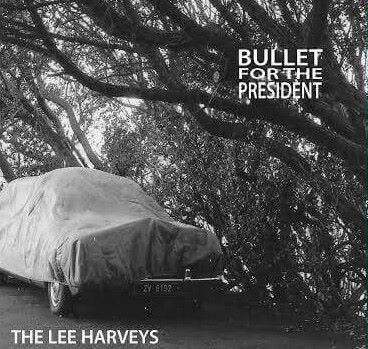 The Lee Harveys – Bullet for the President (Foad Musick)

Just three years since their debut, The Lee Harveys are back guns a blazing on their third.

The Lee Harveys have gone from strength to strength since Gun City blasted out of nowhere back in 2013, building up a healthy live following both here and in the UK, and picking up a legion of devoted fans along the way.

Saying The Lee Harveys are rooted in ’77 punk rock seems redundant now, three albums in, their music has always swung past being regressive into something, that if not wholly original, can be clearly defined as substantially their own.

The Lee Harveys have always got off to a high octane start on albums, and Be What You Want to Be kicks off like a younger spirited brother of Thin Lizzy’s Do Anything You Want To. Doused with zeal, the track also echoes the sentiments of Be Someone on previous album Still Angry. Bitzy Spits venom at those who might defy him adhering to this decisive outlook, “…don’t look me in the face, try to tell me truths when you know that they’re only lies”, Bitzy’s anger, like the positivity expressed by The Harveys, shows no signs of waning. It’s a blisteringly energetic track to begin with, and has you on side from the off.

There’s a real no bullshit quality to their approach, and the band barely stop for breath through the course of the next 30 minutes. With debut Gun City, you could overlook some of the weaker production moments just because of the sheer wealth of the tracks. The band continues to be as passionately strong as they have been on other albums, but the production on Bullet for The President is their strongest yet. Sheen on a punk band can be the death knell, focusing on elements that make a band more appealing to a larger audience can sometimes knock a band’s edge off. It shouldn’t be a surprise that it doesn’t affect The Lee Harveys spiky fiery delivery, or attitude.

Articulate guitar player Ruairi continues to be gods send, bringing an extra dimension to the band, tracks are littered with diverse styles and creative playing. That the band would work better as a four piece was evident back on Still Angry on the tracks with extra guitars, but the guitar playing is incendiary, there’s rock n’ roll, there’s surf music, and there’s bluesy bar riffs . There is even a mariachi element to guitar playing on ‘Horses’, on this album, the Harveys are really demonstrating how they are anything but a one trick pony.

Whether 2nd track Rosie is a nod to the old traditional blues song of the same name remains to be seen, knowing Bitzy’s knowledge of American history, it would be no surprise. The nod certainly would relate to some of the lyrical content on later tracks.  Since coming on the scene, The Harveys have been compared to The Undertones, Bitzy’s voice being on the receiving end of Sharkey comparisons. That similarity has never been as pronounced as it is on Rosie, and later again on Border.  But like the Backbeat band playing the Beatles, Rosie’s musical roots are in the trashier garage bands that came a decade or more earlier. Bitzy’s obsession with all things American is again apparent on American Jesus. His is a love hate/relationship, and that struggle can be heard through tracks, the home of Jerry Lee Lewis, Little Richard and all things Rock n’ Roll, it’s also a land of oppression, and obsessive gun laws, that has difficulty seeing it’s reflection the way others do. On the title track the write about that moment in history that gave them their name. But it’s only about that on the surface, it’s also a parable for the transparency of conspiracy, and freedom. That idea of freedom, of expression, and the liberation from the physical shackles that surround us is something the band make reference to throughout.

Surprisingly there is more of a contemporary pop punk feel to tracks like, She’s Inside, with bassist Tony Carberry on vocal duties, a solo artist in his own right, Tony does a fine job, and again on Modern Holocaust which really demonstrates he’s vocal prowess.  Ruairi’s range as a guitarist is further demonstrated on ‘Inside’ with some colourful pop guitar, recalling at times the more poppier elements of the Cure,  and this pop punk kings, The Only Ones. ‘Holocaust’ again is invested in a much newer sound than the Harveys are known for, but isn’t jarring, and fits comfortably alongside other tracks. You could flick through any “alternative” station, and hear a barrage of bands trying to do something similar, really badly. Tracks like these have the potential to attract a new audience to the band, so here’s hoping they do.

The fun bluesier element to the band that was introduced on Still Angry is manifest again on Lorraine, a snappy infectious number it comes with some choice outsider lyrics, “people pass me by with their pinhead eyes”  Those mariachi like guitar beginnings of Horses lead into a Link Wray-esque air, like stepping on to the set of Spanish western, it’s marvelously atmospheric, conjuring all manner of imagery, and further emphasises the full breath of the Harveys influence, and diverse stylistic knowledge. Garage, surfing music, Rock n’ Roll, punk old and new, all blended together to give the Harveys their own idiosyncratic sound.

That nostalgia is the enemy of music criticism is a fairly well perceived notion, so we’ll move past the 1977 connection to the band, it overlooks the quality, and freshness of this album. The Lee Harveys are not a regressive band; they are a contemporary band that simply uses that classic language of guitars, bass and drums to express themselves.  They are a living breathing contemporary entity, full of piss and vinegar, but distilled into a thoroughly refreshing glass of positivity.

On their third album, they are as defiant as every. Self-assured, and evolving, they’re stronger in voice, musicianship, and production. How many ways can you say that a band has delivered? The album is typically bursting with kinetic energy, and bristling with confidence. It whizzes by leaving a short, sharp, shock,  The Harvey’s just don’t disappoint. Bullet for The President is another instant classic.

The Harvey’s fan base has grown with each album, they’re the final band to play the Pavilion Stage on Friday night at this year’s Rebellion Festival, and no doubt they’ll take some more, there is a sense that it will be a career defining moment for the band, so don’t miss it.

The Lee Harveys have a Facebook Page, and you can buy their album here.