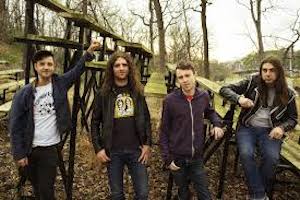 This is an album that is everything you could hope for but may not be entirely what you  expect. The former Dexateens frontman and his excellent band have released their second album and it proudly flaunts a southern heritage while seething with some razor sharp social comment.

The album opens with a withering attack on the all-encompassing ‘Company Man’ accompanied by a warning against ‘all it takes is one wicked heart, a pile of money and a chain of folks just  doing their jobs’ to enable social injustice to thrive. All this is accompanied by a classic rock sound that is heavy, but is not heavy rock. Title track ‘Dereconstructed’’s furious opening salvo leaves no doubt as to the direction we’re heading and when you hear the in your face defiance embodied in lines such as

It becomes clear that the band are smashing preconceptions with relish. The power the internet holds over us all is made all too clear in ‘Burnpiles and Swimming Holes’ in an almost Stones like mode. Bains’ vocals are soulful and this is never put to better effect than when considering the current state of Birmingham, Alabama in ‘The Weeds Downtown’. It’s not often you will get such detailed consideration as “I know the architecture’s largely depressing and the politics are pretty regressive’ but a major strength of ‘Dereconstructed’ is the ability to present a personal perspective in a pure rock format.

‘What’s Good and Gone’ manages to simultaneously discuss the history of the South and place it in a modern context where you can drink tea “picked betwixt firing squads in Sudan’ and use “sugar chopped by bleeding Brazilian hands”. These themes continue in the almost blues riffs of ‘We Dare Defend Our Rights’ and into one of the album highlights, the blistering ‘Flags’ where Bains questions hypocrisies such as spreading fears of Islamic attacks while “so called believers blew up women’s clinics” in his hometown.

‘Mississippi Bottomland’ offers a slight respite from the careering pace of the rest of the album as Bains celebrates the homeland that permeates all the tracks. ‘Dirt Track’ is a homage to the Alabama Gang, legendary NASCAR racing drivers of the 1950’s and maybe a reminder of the ideals that are the spine of this collection of songs.

Dereconstructed’ is in many ways an authentic punk album delivered in a genuine Southern Rock style with full on, no compromise principles and an attitude that defies opposition. Lee Bains III and the Glory Fires have certainly made a statement with this alternative snapshot of the South and offer a refreshingly positive approach to some pretty dark issues.

All words by Dave Jennings. You can read more from Dave by checking out his author archive here.